The Rapid Transit Series (RTS) city bus is a long-running series of transit buses originally manufactured by GMC Truck and Coach Division during 1977, in Pontiac, Michigan. First produced in 1977, the RTS was GMC's entry into the project (the other entry was the Grumman 870 by competitor Flxible) and is the descendant of GMC's entry in the U.S. Department of Transportation's "Transbus" project. The RTS is notable for its then futuristic styling featuring automobile-like curved body and window panels. That design has become a classic, though remains more contemporary as that of its predecessor, the GMC New Look which had a curved windshield, but flat side glass and body panels. Most current buses are now made by specialized coach manufacturers with flat sides and windows. 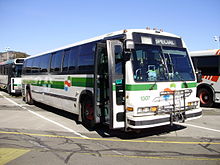 In September 1985 GMC announced that due to lower than expected, or poor sales or their RTS series buses, that it was in the process of trying to sell or close its transit bus building business, and then later announced that they have sold its RTS design, and patent rights, and bus manufacturing equipment and production line to Transportation Manufacturing Corporation (TMC) of Roswell, New Mexico, a subsidiary of Motor Coach Industries in May 1987 though the two companies did a joint order for the New York City Transit Authority to prepare TMC for the production. TMC eventually sold the design and patents to NovaBus in September 1994 in the midst of an order for the Massachusetts Bay Transportation Authority. Production under NovaBus continued until 2002 when NovaBus left the U.S. market and concentrated on its latest LFS low-floor design.

The production was revived, however, by Millennium Transit Services, which tried to manufacture the bus in both high- and low-floor configurations. However, after poor sales and failure to secure awarded deals, Millennium ceased production on the RTS and went out of business in 2009. In September 2011, MTS re-entered the market and showcased its latest RTS product at the 2011 APTA Expo in New Orleans. It also announced plans to introduce a 42.5-foot (12.95 m) version of the standard floor RTS, which would go into production in the near future. It ceased to exist as an entity sometime after 2012 after failing to win any substantial bus orders, as the market for high-floor RTS buses with rear door mounted wheelchair lifts had essentially "dried-up" at this point, with New Flyer Industries, Orion, Gillig, and NABI being the major dominant players in the transit bus market with their low-floor models and front door wheelchair ramps, which were essentially "gobbling-up" all of the new bus orders during this period as well.

The RTS was offered in 30-foot (9.14 m)-, 35-foot (10.67 m)-, and 40-foot (12.19 m)-long models and was built using a modular design that allowed the same parts to be used for all three lengths, the longest of which could seat up to 47 passengers. It was originally powered by either 6- or 8-cylinder versions of Detroit Diesel's venerable Series 71 two-stroke diesel engine channeled through an Allison V730 or ZF 5HP-500 transmission. Later models could be powered by a 6-cylinder Series 92, or the 4-cylinder Series 50 engines.

The RTS is the descendant of GMC's entry for the Transbus project which in turn was the descendant of the RTX (Rapid Transit Experimental), an experimental model for which a prototype produced in 1968 with notes of its production dating to early as 1964. Both the RTX and the Transbus were similar in terms of design to the RTS though had major differences in having a less-rounded body design, a one-step entryway, and (in the case of the Transbus) a 45-foot (13.72 m) length.

Wanting a backup plan in the case that the Transbus project was abandoned, GMC decided to modify the RTX/Transbus design and in 1970 began the project that became the earliest RTS with the first prototype being assembled in 1973 at which point the project went onto hiatus. Though closer to its predecessors than the production models, the RTS name debuted with this prototype. After the project was revived in 1974, GMC would later withdraw from the Transbus project and focus their energies on the RTS. 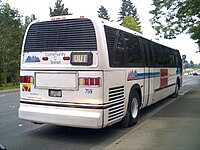 Through the history of the RTS, there have been six generations of production plus two experimental variants (one of which not having made it beyond the prototype stage). 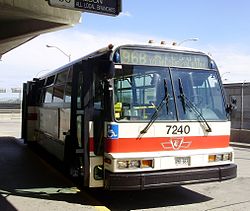 At the time the RTS entered production in the U.S., GMDD (GMC's Canadian production arm) considered producing the RTS for the Canadian market. However, an outcry of protest from key transit providers over not wanting the "futuristic" RTS led GMDD to produce the Classic, an updated New Look that was first produced in 1983. The Classic would prove popular with US agencies as well.

When the Classic was retired in 1997, NovaBus decided to begin limited production of the RTS for the Canadian market. Produced from 1997 to 2001, most of the RTS models made for Canadian agencies were the RTS-06 WFD variant with the majority being sold to agencies in the eastern part of the country. Notably, the Toronto Transit Commission in Ontario operated a fleet of 52 buses built in 1998 while Société de transport de l'Outaouais in Quebec had 12 buses built in 2000.

From 1985 to 1997 Daewoo Bus built the BH120 Royale, a bus originally styled in a manner similar to the RTS. However, according to the Daewoo catalog, it states that it incorporated GMC's intercity coach model. Although in reality, the Royale has incorporated chassis from the Japanese bus manufacturer, Isuzu with Daewoo built MAN engine. The Royale compared to RTS has a completely different body structure, boasting underfloor baggage compartments, and sporting no modular construction. This bus is frequently assumed to be a foreign variant of an RTS, but apart from appearance, it shares nothing with it. The BH120 Royale was later restyled and renamed as BH120 Royale Super which distanced itself visually from the RTS and resembles its Japanese counterpart Isuzu Super Cruiser.[3][4][5]

However, General Motors did briefly consider building small quantities of the RTS at its GM Holden's subsidiary in Australia. A press release was issued noting the feasibility study, but no production commenced. Additionally, General Motors' Diesel Division in London, Ontario, Canada, also launched a study into building RTS coaches within its facilities, but never actually built any coaches.

Millennium Transit Services, LLC was a bus manufacturer formed in 2003 to take over the former Nova Bus manufacturing plant in Roswell, New Mexico and continue construction of the Rapid Transit Series (RTS) buses that were built there. The company was composed mostly of former NovaBus employees and financed by the city of Roswell, the State of New Mexico, and .

On July 27, 2005, the company announced its first major order: 68 transit and 221 suburban buses for New Jersey Transit. Full delivery of this order was expected to commence late in the third quarter of 2006, but "the inability to obtain necessary funds" forced the cancellation of the order.[6] All units completed for New Jersey Transit at that point were rejected and resold to Foxwoods Resort Casino (five transit), Somerset County Transportation (Somerset County, New Jersey) (one transit and one suburban), and Texas A&M University (25 transits).

Besides the New Jersey Transit order, MTS had secured a contract from the City of El Paso, Texas, to convert 25 Transportation Manufacturing Corporation-built RTS buses from diesel to clean-burning CNG. The second order was from Pueblo Transit for two transit buses. The New Jersey Transit order was actually the third order for MTS. Other orders included those from Santa Fe Trails and Beaumont Municipal Transit System. These latter two have since been canceled.

On August 29, 2008, the company filed for Chapter 11 bankruptcy protection.[7] The company has cleared Chapter 11 and is poised to return to full production, pending any significant orders.

On February 26, 2012, Millennium suspended production of its buses in order to do a full inventory of its Roswell facility.[8] The factory reopened in the summer of 2012; however, Millennium had yet to win any significant orders to date, since the cancellations.

A map check in 2019 appears to indicate that MTS no longer exists as an entity, and their facilities at 42 W-Earl Cummings Loop is now a vacant building and lot.[9] The whole property, formerly occupied by MTS, is available for lease as of January 28, 2019.[10]