A Neighbourhood Electric Vehicle (NEV) is a U.S. category for battery electric vehicles that are usually built to have a top speed of 25 miles per hour (40 km/h), and have a maximum loaded weight of 3,000 lb (1,400 kg).[1] Depending on the particular laws of the state, they are legally limited to roads with posted speed limits of 35 miles per hour (56 km/h) or less (in some states 45mph or less). NEVs fall under the United States Department of Transportation classification for low-speed vehicles.[2] The non-electric version of the neighborhood electric vehicle is the motorised quadricycle.

A NEV battery pack recharges by plugging into a standard outlet and because it is an all-electric vehicle it does not produce tailpipe emissions. If recharged from clean energy sources such as solar or wind power, NEVs do not produce greenhouse gas emissions. In the state of California NEVs are classified by the California Air Resources Board (CARB) as zero-emissions vehicles (ZEV) and are eligible for a purchase rebate of up to $1,500 if purchased or leased on or after March 15, 2010.[3][4]

As of June 2014, the GEM neighborhood electric vehicle was the market leader in North America, with global sales of more than 50,000 units since 1998.[5] Another top selling NEV is the Renault Twizy, launched in March 2012, it was the top-selling plug-in electric vehicle in Europe during 2012, and the heavy quadricycle has sold almost 22,000 units through December 2018.[6][7] 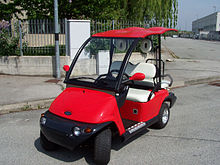 Low-speed vehicle is a federally approved street-legal vehicle classification which came into existence in 1998 under Federal Motor Vehicle Safety Standard 500 (FMVSS 500). There is nothing in the federal regulations specifically pertaining to the powertrain.

Low-speed vehicles are defined as a four-wheeled motor vehicle that has a gross vehicle weight rating of less than 3,000 pounds (1,400 kg) and a top speed of between 20 to 25 mph (32 to 40 km/h).[12] Those states that authorize NEVs generally restrict their operation to streets with a maximum speed limit of 35 or 45 mph (56 or 72 km/h). Because of federal law, car dealers cannot legally sell the vehicles to go faster than 25 mph (40 km/h), but the buyer can easily modify the car to go 35 mph (56 km/h). However, if modified to exceed 25 mph (40 km/h), the vehicle then becomes subject to safety requirements of passenger cars.[citation needed]

These speed restrictions, combined with a typical driving range of 30 miles (48 km) per charge and a typical three-year battery durability, are required because of a lack of federally mandated safety equipment and features which NEVs cannot accommodate because of their design. To satisfy federal safety requirements for manufacturers, NEVs must be equipped with three-point seat belts or a lap belt, running lights, headlights, brake lights, reflectors, rear view mirrors, and turn signals. Windshield wipers are not required. In many cases, doors may be optional, crash protection from other vehicles is partially met compared to other non-motorized transport such as bicycles because of the use of seat belts. 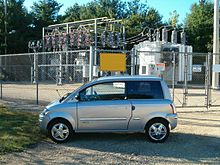 Regulations for operating an NEV vary by state. The federal government allows state and local governments to add additional safety requirements beyond those of Title 49 Part 571.500. For instance, the State of New York requires additional safety equipment to include windshield wipers, window defroster, speedometer, odometer and a back-up light. Generally, they must be titled and registered, and the driver must be licensed. Because airbags are not required the NEV cannot normally travel on highways or freeways. NEVs in many states are restricted to roads with a speed limit of 35 mph (56 km/h) or less. As of February 2012, NEVs are street-legal in 46 states.[13] 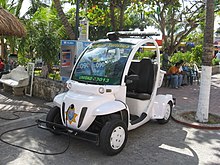 A GEM e2 used by the Tourist Police in Playa del Carmen, Mexico, being recharged

A GEM xLXD NEV used by a street food vendor at the National Mall, Washington, D.C.

The Renault Twizy was launched in Europe in 2012 and it is classified as a heavy quadricycle. 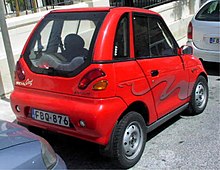 The Indian REVAi 2 door is commercialized as a NEV in the U.S. and as a quadricycle in Europe.

Some communities are designed to separate neighborhoods from commercial and other areas, connecting them with relatively high speed thoroughfares on which NEVs cannot go, legally or safely. As a result, these vehicles are most common in communities that provide separate routes for them or generally accommodate slow speed traffic.

NEV from Dynasty IT

Communities designed specifically with NEVs and similarly sized vehicles in mind include:

Other cities and communities that have adopted NEV-friendly ordinances or have experienced a significant increase of them and street-legal golf cars since 1990 include:

In 2015, sales of low-speed small electric passenger vehicles in China totaled 750,000 units, and 1.2 million in 2016.[10] As of December 2016, the stock of low-speed small electric car was estimated to be between 3 million and 4 million units.[11] However the sales ratio between LSEVs and passenger NEVs began to decrease beginning in 2015. In 2014, LSEVs sales were 15 times more than normal plug-in passenger cars, but the ratio declined to about four times in 2016, and fell to 2.5 times in 2018, when about 1.1 million normal passenger electric vehicles, compared to 1.4 million low-speed vehicles.[10]