This article is about the defunct U.S. bus builder. For the German bus builder, see Neoplan. 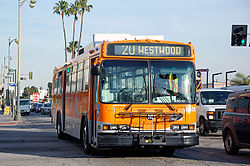 A CNG-powered AN440A standard-floor of LACMTA in Los Angeles, California

A Diesel-powered AN460 standard-floor of WMATA Metrobus in Silver Spring, Maryland 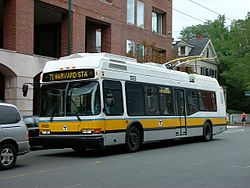 Neoplan USA was a major transit bus manufacturing company based in Denver, Colorado, which was entirely separate from the German corporation, Neoplan, licensing its designs from the German company of the same name. The company was founded in 1981 and folded in 2006. It was originally a subsidiary of Neoplan, but later became an independent licensee. Its main factory was located in Lamar, Colorado.[1]

Its headquarters was also in Lamar, until moving to Denver in 2004.[2] At one time, it also had production facilities in Honey Brook, Pennsylvania, and Brownsville, Texas.

Neoplan opened its first American manufacturing facility in Lamar, Colorado in 1981. It was a 139,000-square-foot (12,900 m2) plant on an 18-acre (7.3 ha) site. The city of Lamar, a farming town of 8,000 that faced tough economic times, pushed to have the plant built in the town in the hope of diversifying their economic base. It donated land and roads for the manufacturing site. The street that went to the plant was renamed Gottlob Auwaerter Drive, after the name of the founder of Neoplan, the name of which it did business as. Company officials were reported to look for a rural site "because of their conviction, based on experience in Europe, that rural workers have a better work ethic and are more reliable and productive employees".[3]

Later in 1981, its first year of operation, Neoplan sold 46 articulated buses to Metropolitan Atlanta Rapid Transit Authority. This was also a year when “articulated” buses, extra-long buses that bent in the middle, were gaining interest with transit departments. As the federal government was phasing out subsidies for mass transit, these buses got attention because they were cost effective. They carried more passengers and saved on labor costs, as they required only one driver.[4]

Neoplan USA filed for Chapter 11 bankruptcy protection in August 2006,[6] listing assets of $13.7 million and debts of $59 million, after closing its manufacturing plant in 2006.

In its last few months of operation, Neoplan had fallen on hard times, such as warranty issues with San Francisco's MUNI and cash-flow problems after Boston's MBTA canceled an order due to late deliveries.[7]

The company still technically continued to exist until selling its parts-supply division, Neopart. Once Neopart was sold, in October 2007,[8][9] Neoplan USA ceased to exist.

When Neoplan opened in Lamar in 1981, company officials said the plant would employ up to 500 people, and manufacture as many as 500 vehicles a year on two assembly lines. Their contracts included 50 transit buses for Metropolitan Atlanta Transit Authority and 40 for Milwaukee. Contracts for another 500 were being bid on.

Throughout its history Neoplan buses had a series of manufacturing defects.

In June 1983 76 buses from Neoplan were purchased by the Metro Transit Authority of Washington D.C. for $12.5 million. In 1984 Metro found hairline cracks in 32 Neoplan buses.[10] The cracks were in the undercarriage of the buses, “...in a weld joining a steel frame above the rear axle with a component that helps support the bus suspension system.”[11]

On December 23, 1984 a Neoplan bus in operation was destroyed in a fire, caused by a faulty electrical circuit. A National Highway and Traffic Safety Administration (NHTSA) investigation found the fire was due to excessive amperage in a protective circuit breaker and an absence of a cutoff switch.[12]

Neoplan USA president Robert Lee pledged to repair the buses at the company's expense, saying it was a minor repair that did not create safety problems. Fairfax County Supervisor Joseph Alexander, a member of the Metro Board, criticized the Neoplan bus purchases back in 1983, stating Neoplan buses were frequently defective and that other transit systems had filed complaints. Neoplan won the bid for Metro because they had underbid General Motors, a competing bus manufacturer, by $275,000.[14] Metro officials were also given tours by Neoplan of their manufacturing facilities and were convinced to buy the buses afterwards.

In March 1985, Neoplan followed the recommendations of the NHTSA in 1984 and recalled all 2,000 buses in service nationwide, because of the widespread problem of cracks in the suspension systems and electrical problems. The recall was done by Neoplan to avoid opening an investigation by NHTSA, and Neoplan continued to deny the cracks were safety issues.[15]

In May 1985 an agreement was reached for Neoplan to pay for repairs to Metro buses, costing about $1 million. Neoplan was criticized for failing to meet deadlines agreed to with the authority. In a letter dated May 3, 1985 Neoplan stated there “is no safety-related basis for the vehicles currently being held out of service”, saying the actions by Metro were “unreasonable and unjustified.”[16]

Since the early 1980s Neoplan was a contractor for Southern California Rapid Transit District, which became the Los Angeles Metropolitan Transit Authority. In September 1984 cracks were found in 128 Neoplan buses, more cracks found in 92 buses up to February 1985.

Neoplan in the 1990s had a high problem occurrence rate in many of its methanol and ethanol fueled buses. On January 4, 2000, a report by MTA Inspector General Arthur Sinai cited several problems on about 250 new Neoplan buses delivered between 1997 and 1999.[17] They included a dozen chronic defects on clutches, problems with exhaust pipes and engine oil reservoirs, failing door structures and defective wheelchair lifts. The report also noted that “none of these problems were remedied by the manufacturer.” The report noted problems went unfixed for long periods, and if repaired often done at MTA expense instead of under warranties. Some warranty claims were refused by Neoplan due to lateness in processing complaints. The report also noted conflicts of interest with MTA inspectors. Three MTA personnel took jobs with Neoplan after leaving the MTA, with one of them working with Neoplan one month after their resignation. Many inspectors who spent time at the Lamar plant physically were caught fudging travel and expense accounts for nearly $10,000 in a 7-month period ending in 1997. One MTA engineer accused of account padding was charged with grand theft in Los Angeles in 1999.

The Port Authority of Pittsburgh bought 159 low floor buses from Neoplan that were put into service in 1999, costing $47.7 million, or up to $300,000 apiece. Cracks in the frame were found shortly afterwards, and the buses were pulled out of service. Neoplan agreed to pay for repair for buses under warranties, and compensated the Port Authority for additional costs associated with the defects on the buses.[18][19]

It was reported that these same bus models underwent testing by the Federal Transit Administration in 1994 and 1995, and problems were detected in these tests. One test in May 1994 found a bus breaking down after being driven 94 miles, and structural cracks happened after 482 miles. In 1995 cracks were found in 10 different places in the steel frame, air cooler outlet and axle mounts.[20]