Nova Bus's Saint-Eustache factory is a former General Motors plant that built city transit buses for the Canadian and US market. In 1987 GM sold its bus-building holdings to Motor Coach Industries (MCI), which had been formed from companies that had been owned by Greyhound Lines. Inaugurated in 1979, the plant was used to produce the New Look (up to 1983) and Classic (starting 1982) model for sales in Canada, while GMC's Rapid Transit Series (RTS) product was moved to join MCI's own designs at Transportation Manufacturing Corporation in Roswell, New Mexico. MCI divested its urban rapid transit models in 1993, and Nova Bus was created to continue producing the Classic and RTS models at the Saint-Eustache and Roswell plants respectively.

The Nova Classic and Nova RTS were later discontinued in order to concentrate on the Nova LFS, a low floor city bus, which was announced in 1994 with deliveries starting in 1997. The last Classic model was produced in 1997. Sales of Nova RTS were insufficient and Nova Bus closed its Roswell and Niskayuna, New York plants in 2002 to concentrate all efforts on the Canadian market. The Roswell plant was later acquired by a local consortium, Millennium Transit Services, that almost went bankrupt in 2008, then emerged from bankruptcy in 2011. The Chicago Transit Authority (CTA), with 484 LFS units delivered between 2000 and 2002, was the first US customer to purchase a large order of this model.

On February 2, 2008, Nova Bus announced plans for the construction of a new assembly plant in Plattsburgh, New York, signifying the company's return to the US bus market. The plant opened on June 15, 2009.[1] The first order from a US-based customer came from the New York City Transit Authority (NYCTA) for 90 LFS articulated buses; the NYCTA now has nearly 500 articulated and non-articulated LFSs. In March 2010, Nova Bus received the first order for the US-built, redesigned LFS from Honolulu, Hawaii's TheBus; 24 were delivered in December 2010. TheBus planned to order more, but ultimately chose buses from Gillig instead.[2] In March 2012, the Walt Disney Company announced that it plans to test a Nova articulated bus on certain high traffic routes at the Walt Disney World Resort. In 2012, the Southeastern Pennsylvania Transportation Authority (SEPTA) ordered 315 buses, including 225 articulated buses to replace its aging Neoplan AN460 articulated buses and its remaining North American Bus Industries NABI 416 standard buses;[3] the articulated hybrid buses were introduced in Philadelphia on October 27, 2014.[4] In 2013, the Chicago Transit Authority placed an order for 300 40 foot Nova Bus clean-diesel buses, with an option to buy an additional 150.[5] 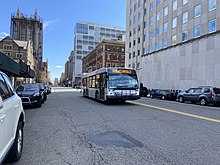 A 2017 LFS in Columbia Transportation service

The rigid LFS entered mass production in 1996, and the LFS Artic and LFX (articulated bus rapid transit model) were introduced in 2009. The standard LFS is also available in a single-door commuter configuration. Both the rigid and articulated versions of the LFS/LFX are available with a hybrid drivetrain that uses an Allison EP40/EP50 parallel hybrid system or a BAE Hybridrive serial system. These options were first delivered in 2007 to Société de transport de l'Outaouais (STO) in Gatineau, Quebec (40-foot model) and in 2011 to Connecticut Transit (62-foot articulated model). In October 2011, the rear window became an option.

The original powertrain layout mounted on the left at the rear was changed to a centre-mounted powertrain, with ventilation through the roof on all LFS models starting in 2009. However, some demonstrators and test buses were built in 2008 with this update. In 2013, a new fourth generation rear layout was introduced and became standard mid 2013. Some early 2013 models were delivered with the third generation rear.