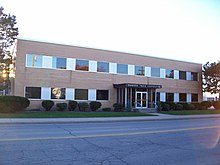 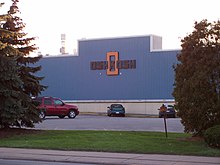 Founded in 1917 as the Wisconsin Duplex Auto Company, the company was created to build a severe-duty four-wheel-drive truck. After the first prototype was built, the company began to develop rapidly. This first four-wheel-drive truck, known today as "Old Betsy", is still owned by Oshkosh Corporation and housed in the new Global Headquarters building in Oshkosh. The vehicle still runs and is used frequently in demonstrations and parades.[4][5] The first mass-produced truck was the 2-ton Model A, with seven produced in 1918. The 3.5-ton Model B and 5-ton Model F followed. The Model TR, introduced in 1933, was a diversification for the company and was the first rubber tired earthmover ever built.[6]

The Model 50-50, introduced in 1955, was the first truck created specifically for the hauling of concrete. The first ARFF built by Oshkosh was a W Series truck delivered to the U.S. Coast Guard in 1953. Oshkosh has also produced aircraft tow tractors, and in 1968 the company designed and built the U-30, 45 of which were built for the U.S. Air Force to tow the Lockheed C-5 Galaxy transport aircraft.[6]

In 1976 the company won a U.S. Army contract to supply 744 M911 heavy equipment transporters,[6] the first in a long line of U.S. Army contracts that now sees Oshkosh Defense as the sole supplier of medium and heavy tactical trucks to the U.S. Army and Marines.[7]

In February 2020, Oshkosh Corporation was named one of the 2020 World's Most Ethical Companies by Ethisphere.[11]

Oshkosh products and services are sold in more than 150 countries around the globe. The company also maintains a global service network.

Products include JLG and SkyTrak brand telehandlers, wheeled and tracked boom lifts, and other lifting equipment.

Since 1989, Oshkosh has completed sixteen acquisitions and three divestitures: