Projecting structure on a boat
For hotels and resorts company, see Outrigger Hotels & Resorts. For ski equipment, see Outrigger ski.
Not to be confused with Outtrigger. 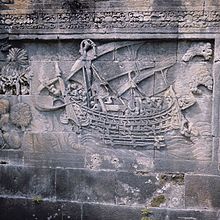 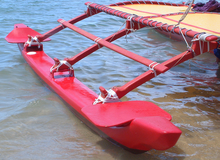 An outrigger is a projecting structure on a boat, with specific meaning depending on types of vessel. Outriggers may also refer to legs on a wheeled vehicle that are folded out when it needs stabilization, for example on a crane that lifts heavy loads.

Missile vehicle standing on its outriggers to stabilize launch

An outrigger describes any contraposing float rigging beyond the side (gunwale) of a boat to improve the vessel's stability. If a single outrigger is used it is usually but not always windward.[1] The technology was originally developed by the Austronesian people. There are two main types of boats with outriggers: double outriggers (prevalent in maritime Southeast Asia) and single outriggers (prevalent in Madagascar, Melanesia, Micronesia and Polynesia). Multihull ships are also derived from outrigger boats.[2]

On a keelboat, "outrigger" refers to a variety of structures by which the running rigging (such as a sheet) may be attached outboard (outside the lateral limits) of the boat's hull. The Racing Rules of Sailing generally prohibit[3] such outriggers, though they are explicitly permitted on specific classes, such as the IMOCA Open 60[4] used in several major offshore races.

In fishing from vessels, an outrigger is a pole or series of poles that allow boats to trawl more lines in the water without tangling and simulates a school of fish. 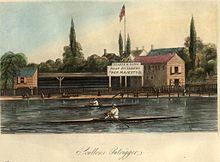 Early racing sculls with outriggers in 1851.

In a rowing boat or galley, an outrigger (or just rigger) is a triangular frame that holds the rowlock (into which the oar is slotted) away from the saxboard (gunwale for gig rowing) to optimize leverage. Wooden outriggers appear on the new trireme around the 7th or 6th centuries BC and later on Italian galleys around AD 1300[citation needed] while Harry Clasper (1812–1870), a British professional rower, popularised the use of the modern metal version and the top rowing events accepted the physiological and ergonomic advantages so acceded to its use in competitions. Wing-riggers are made by some manufacturers of racing shells which are reinforced arcs or form a single projection akin to aircraft wings instead of conventional thin metal triangular structures.