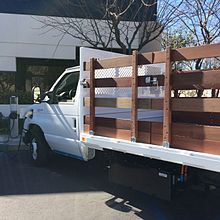 Phoenix Cars LLC., d.b.a. Phoenix Motorcars based in Ontario, California, is a leading developer of zero emission, all-electric vehicles (EV), focused on the deployment of light- and medium-duty EVs into the fleet and transit markets.[4] The company was founded in 2002 and became a wholly owned subsidiary of Al Yousuf LLC in 2009. Phoenix launched its all-electric 14-22 passenger shuttle bus with 100 mile range per charge in 2013. The bus is based on the versatile Ford E350/450 Series vehicle.[5]

Phoenix is fully California Air Resources Board (CARB) approved and is currently delivering vehicles to customers.[6][7]

On March 19, 2008, Phoenix Motorcars announced that it had completed a financing and restructuring, with Dubai, United Arab Emirates-, and Arlington, Virginia-based AES Corporation, as new investors, the departure of the Phoenix Motorcars’ original founders and the appointment of a new board of directors.[8]

In mid-2010, Al Yousuf LLC closed on a deal with AES Corporation that enabled Phoenix Motorcars to become a wholly owned subsidiary of Al Yousuf LLC.[9] This led to another restructuring of Phoenix Motorcars in less than 2 years, with the company switching its focus to its 3rd generation drive system targeted for buses and trucks on the Ford E350/E450 cutaway chassis.[9][10]

Phoenix launched its third product in 2013, which is based on the versatile Ford E350/E450 Series, an all-electric 14-22 passenger shuttle bus with 100-mile range per charge.[4] It is currently available in the United States and Canada.

This product achieved California Air Resources Board (CARB)[6][7] certification in July, 2014 in the 10,001-14,000# GVWR range. Along with its 100-mile range per charge, the ZEUS shuttle is capable of rapid charging via CHAdeMO or SAE standards. It also has optional features such as ADA capability and advanced battery diagnostic display.

Phoenix launched its electric Flatbed in 2015, which is also based on the Ford E350/450 Series, with 100 mile range per charge. It is currently available in the United States and Canada.