The Pierce Silver Arrow was a concept car designed by Phillip O. Wright, five of which were built in a record three months,[citation needed] and introduced at the 1933 New York Auto Show. 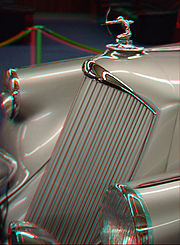 3D image of a Silver Arrow

The car caused an absolute sensation, with a futuristic design, spare wheels hidden behind the front wheels, a wide-degree angle V-12 and a top speed of 115 mph (185 km/h). Five production models were built, but they resembled a more typical Pierce-Arrow and lacked many of the unique features shown in New York.[further explanation needed] Only three Silver Arrows exist today.

The car is famous in Mafia under the fictional name "Silver Fletcher".