Chain of truck stops in the US and Canada

Pilot Corporation opened its first truck stop in 1981. On November 15, 1993, Pilot entered a joint venture with Marathon Petroleum Company, and all Pilot Truck Stops were renamed Pilot Travel Centers. At its inception, the number of stops was around 60; however, that was to be short-lived.

In the next few years, Pilot Travel Centers experienced significant growth. Marathon converted many Speedway truck stops, wholly owned by Marathon, over to the Pilot Travel Center moniker starting in mid-2002. Midway through 2003, another major expansion occurred with the purchase of the Williams Truck Stop chain. The Marathon-Pilot joint venture successfully increased the Pilot Travel Center name recognition throughout the United States, as the number of stops more than quadrupled.

In 2008, Pilot bought out Marathon's interest in the business and entered into a new partnership arrangement with CVC Capital Partners, an international private equity firm.[7] Pilot also has partnerships with Road Ranger and Town Pump, and purchased a controlling stake in Mr. Fuel in 2014.[4] In October 2014, Pilot Flying J announced they would borrow funds to provide a $750 million dividend to shareholders and facilitate a buyout of its private-equity partner CVC Capital Partner.[8] In 2015, the Haslam family completed the buyout of CVC Capital Partner's stake.[9] 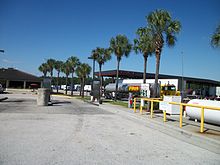 A Pilot diesel fuel truck at a Flying J in Pasco, Florida

In July 2009, Pilot agreed to purchase Flying J's travel centers, as a part of Flying J's efforts to remove itself from Chapter 11 bankruptcy.[10] The deal was finalized July 1, 2010, and the combined company took the d.b.a. name Pilot Flying J,[11] while Pilot Travel Centers LLC remained the company's legal name.[2]

As part of the deal, both the Pilot and Flying J chains will keep their identities intact, while both chains started accepting the Comdata and Flying J's in-house TCH fuel cards. In addition, Flying J received cash and equity in the new combined chain. Flying J's oil & refining operations as well as its banking & insurance division will remain separate from the new company,[12] and was subsequently renamed FJ Management Inc.[13]

Currently, Pilot Flying J is the largest purveyor of over-the-road diesel fuel in the United States. Pilot Flying J also is known as the largest Travel Center chain in the country with over 750 locations under the Pilot, Flying J, & Mr. Fuel brands. Pilot Flying J is also the third largest franchiser of quick service restaurants in the nation, offering one to three different concepts at each location, making it the largest franchisee of Subway in the world with over 200 locations. Unlike many travel centers and truck stops, the majority of locations with the Pilot Travel Centers brand do not utilize full-service dining. However, the Flying J brand does utilize full-service dining with Denny's, as do a small handful of Pilot-branded locations.

In addition to Wingfoot, Pilot Flying J also has Bosselman Boss Shop garages operated by Bosselman that provide similar services as Wingfoot. The Boss Shop partnership expanded as part of an agreement for Pilot Flying J to acquire most of Bosselman's truck stops in November 2011 in order to boost Pilot Flying J's presence in the Northern Great Plains region. Before the deal, Bosselman bought diesel fuel from Pilot and continues to do so for its remaining travel center location in Grand Island, Nebraska.[23]

In 2005, Pilot Flying J joined forces with Victory 500 marketing to publish Challenge magazine, a magazine aimed at professional truckers and sold exclusively at Pilot Flying J travel centers as well as by subscription.[24] The magazine ceased publication after 110 issues in December 2014.[25] 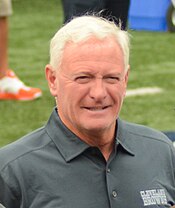 On April 15, 2013, the headquarters of Pilot Flying J, located in Knoxville, Tennessee, was raided by FBI and IRS agents as part of an "ongoing investigation". On April 16, CEO Jimmy Haslam reported the investigation involved claims of failure to pay rebates to trucking customers.[26]

On April 18, 2013, an affidavit used to secure various search warrants was made public. The documents alleged that several members of the Pilot Flying J sales force, as well as company president Mark Hazelwood, were either involved or aware of the alleged scheme.[27][28] Three sales employees' private homes were also raided as part of the investigation.[29]

On Tuesday, July 16, 2013, a federal judge in Arkansas granted preliminary approval to a proposed settlement agreement between Pilot Flying J and several trucking companies that had sued over allegations of fuel rebate fraud.[30] Pilot Flying J paid restitution to customers and agreed to pay a $92 million penalty pursuant to a Criminal Enforcement Agreement.[31]