The Porsche 550 was a racing sports car produced by Porsche from 1953 to 1956. In that time only 90 Porsche 550s were produced, but it quickly established dominance in the 1.1- and 1.5- liter classes. The Porsche 550 is a mid-engine car with an air-cooled four-cylinder engine, following the precedent of the 1948 Porsche 356/1 prototype designed by Ferry Porsche.  The mid-engine racing design was further developed with Porsche's 718 model; its advantages led to it becoming the dominant design for top-level racing cars by the mid-1960s.

The Porsche 550 has a solid racing history; the first race it entered, the Nurburgring Eifel Race in May 1953, it won. The 550 Spyder would usually finish top 3 in its class. Each Spyder was designed and customized to be raced.

The engine of the 550 is mounted in front of the rear axle making it mid-engined. This gives it a more balanced weight distribution, and allows for largely neutral handling. On the other hand, the low mass moment of inertia about the vehicle's vertical axis can lead to a sudden, difficult to control rotation of the car. Ferdinand Porsche had pioneered this design layout with the Auto Union Grand Prix car of the 1930s.

The first 550 had a fully synchronized 4-speed gearbox. Starting in 1956, a five-speed gearbox was used, but its first gear only had to start and (like the reverse gear) had to be placed over a barrier and not synchronized. Excessive slip to the drive wheels in corners was prevented by a limited slip differential.[7] 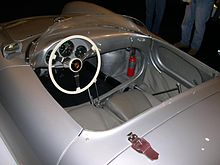 Inspired by the Porsche 356 which was created by Ferry Porsche, as well as spyder prototypes built and raced by Walter Glöckler starting in 1951, the factory decided to build a car designed for use in auto racing.[8] The Porsche 550 Spyder was introduced at the 1953 Paris Auto Show.[9] The 550 was very low to the ground, in order to be efficient for racing. In fact, former German Formula One racer Hans Herrmann drove it under closed railroad crossing gates during the 1954 Mille Miglia.

The car was also featured in the 2000 racing game, Need For Speed: Porsche Unleashed.

The first three hand built prototypes came in a coupé with a removable hardtop. The first (550-03) raced as a roadster at the Nurburgring Eifel Race in May 1953 winning its first race. Later that year the 550 took class wins in the 24 Hours of Le Mans and the Carrera Panamericana; the Carrera Panamericana win was commemorated with the Carrera branding for later Porsches with performance options. From 1953 to 1957, the Porsche works team evolved and raced the 550 with outstanding success and was recognized wherever it appeared. The silver Werke cars were painted with spears of different colors on the rear fenders to aid recognition from the pits. Hans Herrmann’s particularly famous ‘red-tail’ car No 41 went from victory to victory. For such a limited number of 90 prototype and customer builds, the 550 Spyder was always in a winning position, usually finishing in the top three results in its class. During its tenure with the works team it was challenged only twice among the smaller cars at the 24 Hours of Le Mans, with a 1.5 liter O.S.C.A. finishing ahead but disqualified in the 1954 race and a 1.1 liter Lotus Eleven trailing the 1.5 liter winning 550 by one lap in the 1957 race. The 1956 version, the 550A with a lighter and more rigid spaceframe chassis, gave Porsche its first overall win in a major sports car racing event, the 1956 Targa Florio. During this era Porsche was the first car manufacturer to get race sponsorship, which was through Fletcher Aviation, who Porsche was working with to design a light aircraft engine and later Telefunken and Castrol.

The 550 was also raced by privateers, who kept the type in competition after the works team had moved on to the 718 in 1957. The 550 was both a road and track car and it was common for privateers to drive it to the race track, race it, then drive it home.

Each Spyder was assigned a number for the race and had gumballs positioned on doors, front and rear, to be seen from any angle. On some 550s owned by privateers, a crude hand written number scrawled in house paint usually served the purpose. Cars with high numbers assigned such as 351, raced in the 1000 mile Mille Miglia, where the number represented the start time of 3.51am. On most occasions, numbers on each Spyder would change for each race entered, which today helps identify each 550 by chassis number and driver in period black and white photos.

Its successor from 1957 onwards, the Porsche 718, commonly known as the RSK was even more successful. The Spyder variations continued through the early 1960s, the RS 60 and RS 61. The Porsche Boxster S 550 Spyder is a modern mid-engined sports car that pays tribute to the 550; the Spyder name was effectively resurrected with the RS Spyder Le Mans Prototype.

As Dean was finishing up Giant’s filming in September, 1955, he suddenly traded in his 356 Porsche Super Speedster at Competition Motors, for a new 1955 Porsche 550 Spyder on September 21st, and immediately entered the upcoming Salinas Road Race event scheduled for October 1 and 2.[11]

According to Lee Raskin, Porsche historian and author of James Dean At Speed, Dean asked custom car painter and pin striper Dean Jeffries to paint "Little Bastard" on the car:

Dean Jeffries, who had a paint shop next to [George] Barris did the customizing work which consisted of: painting '130' in black non-permanent paint on the front hood, doors and rear deck lid. He also painted 'Little Bastard' in script across the rear cowling. The red leather bucket seats and red tail stripes were original. The tail stripes were painted by the Stuttgart factory, which was customary on the Spyders for long distance endurance racing identification.[12]

The 550 is among the most frequently reproduced classic automobiles. [13]

Several companies have sprung up in the last 25 years that offer kit and turnkey cars.