The Porsche 981 is the internal designation given to the third-generation of the Boxster and second generation of the Cayman models built by German automobile manufacturer Porsche. It was announced on 13 March 2012 at the Geneva Auto Show with sales starting early summer 2012.

The 981 reflects the new design language from the 911 (991) and 918, and features revised engine and transmission specifications. The chassis had been revised: it is 40 percent more torsionally rigid, the front track is 40 mm (1.6 in) wider, the rear track is 18 mm (0.7 in) wider, and the wheelbase has been extended by 60 mm (2.4 in). There is a small weight reduction of up to 35 kg (77 lb) compared to the outgoing 987.[10] The 981 was the first Boxster/Cayman to use electronically assisted steering, and the parking brake in the car uses an electronic linkage. The instrument cluster features a 4.6" TFT color screen in conjunction with various sensors that can display accurate engine temperature, oil temperature and oil pressure. The Sport Chrono Package includes dynamic gearbox mounts. Another new feature was the auto start/stop system.

The standard Boxster is fitted with a new 2.7-litre flat-6 engine, and the Boxster S is fitted with the existing 3.4-litre engine but with revised performance. The 2.7-litre engine is rated at 194 kW (260 hp) while the 3.4-litre engine is rated at 231 kW (310 hp). Both engines are equipped with a 6-speed manual gearbox and an optional 7-speed reworked PDK. Both manual and automatic models are available with several technical options including Porsche Torque Vectoring (PTV) and a Sport Chrono Package that includes active transmission mounts, and makes the PDK-equipped model even faster.[11][12] Porsche claims that the new generation Boxster provides fuel savings of 15% over the outgoing model.

The range was expanded in March 2014 with the addition of the GTS derivative, with slightly altered front and rear bumpers and an additional 11 kW (15 hp) from the 3.4-litre engine.[13]

Porsche unveiled the latest Boxster Spyder based on the 981 Boxster in April 2015 at the New York Auto Show. The styling of the car is similar to the previous generation Spyder, continuing the twin hump rear deck and manually operated canvas top. It also shares some styling with the Cayman GT4, using the same front and rear fascia. The engine is also shared with the Cayman GT4, but mildly detuned. It is a 3.8 litre flat-6, making this the largest and most powerful engine used in a Boxster at the time, rated at 287 kW (385 hp). This allowed the car to attain a top speed of 290 km/h (180 mph).

It was the lightest Porsche in the model lineup at the time, weighing 1,315 kg (2,899 lb). This was achieved through the use of aluminium doors and rear boot lid, a manually operated canvas soft top with electronic assist and unique lightweight 20 inch wheels. The manual soft top resulting in a weight saving of 10 kg (22 lb) over the Boxster. The air conditioning and audio system were also removed, although they could be added as no cost options. Total weight savings amounted to 30 kg (66 lb).[14] Braking is via larger brakes than used on the Boxster S, being 340 mm front and 330 mm rear units taken from the 911 Carrera S. A limited slip differential shared with the Cayman GT4 with Porsche Torque Vectoring was also used and the model features a 20mm lower ride height than the standard Boxster.[15]

Additionally it also borrows the steering rack from the 911 Turbo S along with the same reduced diameter GT steering wheel as used in both the GT3 and Cayman GT4. The Boxster Spyder was only available with a 6 speed manual transmission.[16] 2,400 units in total were made, with 850 destined for the US.[citation needed] 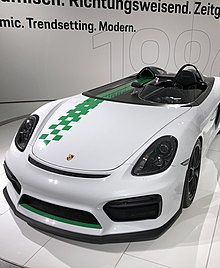 Boxster Bergspyder at the Porsche Museum

In 2019, Porsche revealed that in 2015, the Executive Board commissioned a project group from Weissach to build a sports car based on the 981, that was to be as light and minimalist as possible. 50 years ago, Porsche's engineers had built a car using similar constraints: the Porsche 909 Bergspyder. The 981 Bergspyder never entered production as it failed feasibility tests.[17]

The second generation Cayman was unveiled at the 2012 Geneva Motor Show. The production version was introduced as a 2014 model in the spring of 2013. The new car was available in both the standard trim with a 2.7-litre engine, and in the S trim with a 3.4-litre engine. Both versions were available with either a 6-speed manual or a dual-clutch 7-speed PDK transmission.

The 981 features upgrades including a new body, a longer wheelbase, a wider front track, and a redesigned interior that matches the firm's contemporary 911 models.

The new model gained acclaim in the motoring press as one of the best handling sports cars at any price, due to its-mid engine layout and driving dynamics. The Cayman S benefitted from the same engine and running gear as Porsche's latest 3.4-litre version of the 911. [22][23][24]

The Cayman GTS was introduced in 2014, and is based on the 981 platform. It featured a marginally more powerful engine, a new body kit, new 20-inch Carrera S wheels, new Bi-Xenon headlights, and a new sports exhaust system. The Cayman GTS is longer than the Cayman and the Cayman S by 30.5 mm (1.2 in) due to its bumpers. The new, optional passive sport suspension allows the Cayman GTS to have a 20 mm lower ride height compared to the Cayman equipped with standard passive suspension or 10 mm lower compared to one with the standard-equipped PASM. The engine is rated at 254 kW (341 hp), and can achieve a 0-100 km/h (62 mph) acceleration time of 4.9 seconds with the manual transmission, 4.7 seconds with PDK and 4.5 seconds with PDK and Sport Plus mode, which is activated via the now standard Sports Chrono Package. The Cayman GTS weighs 1,385 kg (3,053 lb) with the manual transmission and can attain a top speed of 285 km/h (177 mph) while the Cayman GTS with PDK can reach 282 km/h (175 mph) and weighs 1,375 kg (3,031 lb). The configuration changes made over a standard Cayman S resemble closely what Porsche did to its predecessors through Cayman S Sport and Cayman R in the 987 generation models. [25] [26]

In 2015, a high performance track oriented version of the Cayman, named the Cayman GT4 was introduced, using a revised and a slightly de-tuned version of the 3.8-litre flat-six engine from the 911 (991) Carrera S. The GT4 was available only with a 6 speed manual transmission and weighed 1,340 kg (2,954 lb). It has a vented front bumper to improve cooling for the additional radiator, with a lower lip spoiler as well as a fixed rear wing for providing downforce. Compared to the standard Cayman, it features a 30 mm lower ride height, upgraded brakes from the 991 GT3, a limited slip differential combined with Porsche Torque Vectoring, and Porsche Active Suspension Management with dampers derived from the 991 GT3. A number of reinforcements were also made throughout the chassis to keep it stiff and well balanced. A Club Sport Package is also available, featuring a rear half rollcage, preparation for a battery cut off switch, a fire extinguisher and a six-point racing harness for the driver, compatible with a neck saving HANS device. Sport Chrono Package with unique Track Precision app is also available specifically for the GT4, adding an additional ECU to the car to deliver telemetry data to the driver's smartphone. In the United Kingdom, the GT4 could be ordered before its introduction at the 2015 Geneva Motor Show in March, and the first cars would arrive in dealerships in March. The Cayman GT4 has a projected Nürburgring Nordschleife lap time of 7 minutes 40 seconds[27][28] and has a top speed of 183 mph (295 km/h).[29] The GT4 has gained rave reviews from magazines like Evo and the likes of Chris Harris. 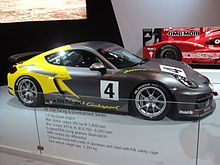 As opposed to the road going Cayman GT4, the Clubsport version is fitted with Porsche's PDK double clutch transmission (albeit with the 7th gear disabled) with shift paddles on the steering wheel, as well as mechanical rear-axle locking differential. The Cayman GT4 Clubsport weighs 1,300 kg (2,866 lb) and shares the same Performance Friction brakes and lightweight suspension strut front axle found on the Porsche 991 GT3 Cup. Its ABS is adjustable in 12 steps. A 100-litre FIA-approved "bag" fuel tank is available as an option for endurance racing. In addition to its lightweight features, it is supplied fitted with an FIA welded-in roll-cage, six-point harness and racing bucket seats.[30][31]