Prévost (/ˈpreɪvoʊ/, French pronunciation: ​[pʁevo]) is a Québec, Canada-based manufacturer of touring coaches and bus shells for high-end motorhomes and specialty conversions. The company is a subsidiary of Volvo.[1] 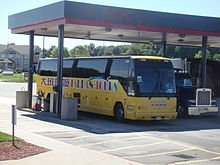 The company was founded in 1924 by Eugène Prévost (1898–1965), a cabinet maker specializing in church pews and school furniture, who in 1924 was asked to build a custom bus body for a new REO truck chassis. Les Ateliers Prévost, as the company was then called, received several repeat orders. Between 1937 and 1939, Prévost Car's first bus manufacturing plant was built. Initially the vehicles were built around a wooden frame. In 1945 this changed, and bodies were made of metal.

The company was acquired by Paul Normand in 1957. In 1969, two American businessmen formed a partnership with André Normand, then President of Prévost, to become the company's owners. These three men, in turn, sold Prévost to Volvo Bus Corporation in 1995.[2]

As of June 2019, Prevost operates 15 parts and service centers in North America, nine of them in the United States.[3]

The latest models saw the XLII thoroughly revised, with a longer wheelbase for more storage and a smoother ride. This, and other changes, marked the beginning of the new X3-45.

The flagship H3-45 received some further enhancements in 2006 with GPS and destination sign options. In addition, the new Delta sound system was developed to provide improved sound throughout the cabin.

For the new EPA 2007 Standards, Prévost now offers an innovative installation of the Diesel Particulate Filter and the Rooftop Diffuser for Increased Safety, Performance, Serviceability and Security. The standard Detroit Diesel has been uprated from 12.7 litres to 14 litres for the model year 2007.

For the 2008 model year, Prévost introduced a new Volvo D13 engine from their parent company as a replacement for the then-current Detroit Diesel Series 60 offering. The Volvo I-Shift semiautomatic transmission was introduced as an option to the Allison B500R transmission. A set of new interior colour schemes were developed for the 2008 model year to provide a modern feel. There are three "trim levels" ranging from fabric to leather and wood.

Beginning with 2011, the Prevost X3-45 is available in a transit configuration, with bi-fold doors instead of a sedan-type door. The New York City Transit Authority is the launch customer for this configuration. Previously, 20 transit-style buses in the LeMirage predecessor model had been built for GO Transit in the late 1990s.

Prévost is also the North American builder of the Volvo 9700 motorcoach.

Then President Obama boards the "Ground Force One" bus in 2011.

Ground Force One is the nickname given to two heavily modified X3-45 VIP conversion coach owned by the United States Secret Service and used by the President of the United States and other high-ranking politicians or dignitaries.[8] Prevost built the coach as a conversion shell, the Hemphill Brothers Coach Company fitted out the interiors of the coach, and it is assumed that other features, like armor plating, were added by the Secret Service.[9]