For other uses of "REO", see REO (disambiguation).

The REO Motor Car Company was a Lansing, Michigan-based company that produced automobiles and trucks from 1905 to 1975. At one point the company also manufactured buses on its truck platforms.

Ransom E. Olds was an entrepreneur who founded multiple companies in the automobile industry. In 1897 Olds founded Oldsmobile. In 1905 Olds left Oldsmobile and established a new company, REO Motor Car Company, in Lansing, Michigan. Olds had 52 percent of the stock and the titles of president and general manager. To ensure a reliable supply of parts, he organized a number of subsidiary firms like the National Coil Company, the Michigan Screw Company, and the Atlas Drop Forge Company.

Originally the company was to be called "R. E. Olds Motor Car Company," but the owner of Olds' previous company, then called Olds Motor Works, objected and threatened legal action on the grounds of likely confusion of names by consumers.[1] Olds then changed the name to his initials. Olds Motor Works soon adopted the popular name of its vehicles, Oldsmobile (which, along with Buick and Cadillac, became a founding division of General Motors Corporation).

The company's name was spelled alternately in all capitals REO or with only an initial capital as Reo, and the company's own literature was inconsistent in this regard, with early advertising using all capitals and later advertising using the "Reo" capitalization.[2] The pronunciation, however, was as a single word. Lansing is home to the R. E. Olds Transportation Museum.

By 1907, REO had gross sales of $4.5 million and the company was one of the four wealthiest automobile manufacturers in the U.S. After 1908 however, despite the introduction of improved cars designed by Olds, REO's share of the automobile market decreased due in part to competition from emerging companies like Ford and General Motors. 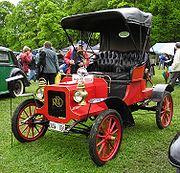 In 1915, Olds relinquished the title of general manager to his protégé , and eight years later he ended his tenure as the company's presidency as well, retaining the position of chairman of the board.

Perhaps the most famous REO episode was the 1912 Trans-Canada journey. Traveling 4,176 miles (6,720 km) from Halifax, Nova Scotia, to Vancouver, British Columbia, in a 1912 REO special touring car, mechanic/driver Fonce V. (Jack) Haney and journalist made the first trip by automobile across Canada (including one short jaunt into northeastern Washington State when the Canadian roads were virtually impassable.)

From 1915 to 1925, under Scott's direction REO remained profitable. In 1923, the company sold an early recreational vehicle, called the "Motor Pullman Car." Designed by Battle Creek, Michigan newspaper editor , the automobile included a drop-down sleeping extension, a built-in gas range, and a refrigerator.[10] During 1925, however, Scott, like many of his contemporaries/competitors, began an ambitious expansion program designed to make the company more competitive with other automobile manufacturers by offering cars in different price ranges. The failure of this program and the effects of the Great Depression caused such losses that Olds ended his retirement during 1933 and assumed control of REO again, but resigned in 1934. During 1936, REO abandoned the manufacture of automobiles to concentrate on trucks.

The Flying Cloud was the first car to use Lockheed's new hydraulic internal expanding brake system and featured styling by . While Ned Jordan is credited with changing the way advertising was written with his "Somewhere West of Laramie" ads for his Jordan Playboy, Reo's Flying Cloud——a name that provoked evocative images of speed and lightness——changed the way automobiles would be named in the future. It had a 115-inch (2,900 mm) wheelbase.[12] The final REO model of 1936 was a Flying Cloud.

The 1931 Reo Royale was a trendsetting design, introducing design elements that were a precedent for true automotive streamlining in the American market. The 8-cylinder model was sold through 1933 with minor updates. The name was used on a lower-priced 6-cylinder model through 1935. Beverly Rae Kimes, editor of the Standard Catalog of American Cars, terms the Royale "the most fabulous Reo of all". In addition to its coachwork by Murray designed by their Amos Northup, the Royale also provided buyers with a 125 hp (93 kW) straight-eight with a nine-bearing crankshaft, one-shot lubrication, and thermostatically-controlled radiator shutters. The Royale rode upon factory wheelbases of 131 inches (3,300 mm) (Model 8-31) and 135 inches (3,400 mm) (Model 8-35); a 1932 custom version rode upon a 152-inch (3,900 mm) wheelbase (Model 8-52). As many as 3 Dietrich coachbuilt bodies were built on 148-inch (3,800 mm) wheelbases in 1931. Beginning in 1933, the Royale also featured as an option REO's semi-automatic transmission, the Self-Shifter. The Model 8-31 was priced at $2,145. The model 8-35 was priced from $2,745 for the sedan to $3,000 for the convertible coupe. The coachbuilt cars were priced close to $6,000. A convertible Victoria was listed at $3,195 but only one is known to have been built. The 8-35 & 8-52 are considered full CCCA classics.

Although truck orders during World War II enabled it to revive somewhat, the company remained unstable in the postwar era, resulting in a bankruptcy reorganization. In 1954, the company was still underperforming, and sold its vehicle manufacturing operations (the primary asset of the company) to the Bohn Aluminum and Brass Corporation of Detroit. Three years later, in 1957, Reo's vehicle manufacturing operation became a subsidiary of the White Motor Company.[14] White then merged REO with Diamond T Trucks in 1967 to form Diamond Reo Trucks In 1975, this company filed for bankruptcy and most of its assets were liquidated. Volvo later took over White and thus currently owns the rights to the REO brand name.

Meanwhile, after selling Reo's vehicle manufacturing operation to Bohn in 1954, management began liquidating the remainder of the company. For tax reasons a group of shareholders successfully challenged the liquidation in a proxy fight in September 1955, and forced REO to take over a tiny nuclear services company called Nuclear Consultants, Inc. in a reverse takeover. The resulting Nuclear Corporation of America, Inc., diversified and purchased other companies to become a conglomerate, spreading into an array of fields including prefabricated housing and steel joist manufacturing in addition to nuclear services. Most of these business were failures and the company was bankrupt again by 1966. After reorganizing, only the successful steel-joist business remained; the company started producing recycled steel, and eventually renamed itself Nucor.