The Fiat Ducato is a light commercial vehicle developed by the Sevel joint venture between Fiat and PSA Peugeot Citroën, produced since 1981. It was also sold as the Citroën C25, Peugeot J5, Alfa Romeo AR6 and Talbot Express for the first generation, while the second and third generations are marketed as the Fiat Ducato, Citroën Jumper, and Peugeot Boxer. It entered the Canada and United States markets as the Ram ProMaster for the 2014 model year.

In Europe, it is produced at the Sevel Sud factory, in Atessa, Italy. It has also been produced at the Iveco factory in Sete Lagoas, Brazil, at the Karsan factory in Akçalar, Turkey, at the Fiat Chrysler Automobiles Saltillo Truck Assembly Plant in Saltillo, Mexico, and at the Fiat-Sollers factory in Elabuga, Russia. Since 1981, more than 2.6 million Fiat Ducatos have been produced.[1] The Ducato is the most common motorhome base used in Europe; with around two thirds of motorhomes using the Ducato base.[2]

In July 2019 the electric version of the Ducato developed by FCA Italy was presented and will be on sale from 2020.[3]

The Ducato was first launched in 1981, and was the result of Fiat's collaboration with PSA Peugeot Citroën, that resulted in the vehicle's development starting in 1978. The vehicles were manufactured at the Sevel Val di Sangro plant in Atessa, central Italy, and at the Sevel Campania plant in Pomigliano d'Arco, Naples[4] together with the similar Alfa Romeo AR6, Citroën C25 and Peugeot J5 versions. The Peugeot J5 was sold as the Talbot Express in the United Kingdom (1986–1994). The collaboration of Fiat and PSA had earlier produced the Fiat 242 and Citroën C35 from 1974.

For the Fiat, engines were 2.0 litre 4-cylinder petrol or 1.9 diesel. Trim levels were base, S and SX. Model variants were named according to carrying capacity: Ducato 10 (1.0 tons), Ducato 13 (1.3 tons), Ducato 14 (1.4 tons) and Ducato Maxi 18 (1.8 tons). The Ducato Mk1 was very popular as a basis for campervan conversions. A short-wheelbase version was sold as Fiat Talento.

The Citroën C25 was a 2.5 tonne capacity van (hence the name C25) produced from October 1981 until 1993. The C25 succeeded the dated corrugated Citroën Type H post war one tonne van. The C25's engines are transversely mounted; the petrol one is a Peugeot 504 unit whilst the diesel one is from the Citroën CX diesel. Both units are coupled to a Citroën gearbox.

The Peugeot J5 was a 2.5 tonne capacity van, also produced from October 1981 until 1993. Its powertrains are as per the Citroën C25. In 1991, the J5 series 2 was launched with a new front grille and headlights. It was replaced in 1994 by the Peugeot Boxer, which was based on the second generation Fiat Ducato.

It sold reasonably well in France but enjoyed little commercial success outside France, being overshadowed in much of Europe by the Fiat Ducato, which was supported by stronger commercial vehicle dealership networks in key markets.

Its Citroën/Peugeot petrol and diesel engines were transversely mounted driving the front wheels. A 4x4 option was also available, although is now very rare today.

In 1991, the series 2 Express was launched with an enlarged grille. Production was discontinued in 1994, when Peugeot finally discarded the Talbot marque.

This van was popular in the United Kingdom, for new conversions to camper vans or motorhomes by coach builders. Provided they are well-maintained and not too rusty, they can still command prices of many thousands of pounds even though they are over twenty years old. This is in marked contrast to the values of the commercial van versions. 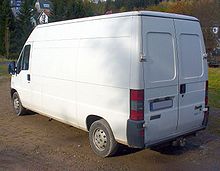 New Sevel produced version. Peugeot called it Boxer while Citroën named it Jumper (Relay in the United Kingdom). One engine option was a Fiat 2.5 L diesel, which was replaced with 2.8 L Iveco/Sofim engine in 1998.

The Ducato Goods Transport has a payload of 12 m cubed and comes with a choice of four engines: the 2.0 petrol, 2.0 JTD, 2.3 JTD 16v or 2.8 JTD. All of these conformed to the Euro 3 standards and offered programmed maintenance management. The range included two types of gearbox: a mechanical box with a five-speed manual plus reverse and an automatic transmission with four speeds plus reverse.

The Ducato Passenger Transport has a carrying capacity of six to nine people and comes with the 2.3 litre JTD 16v engine, which again is Euro 3 compliant and delivers 110 bhp.

The Ducato Combi is a mixture of the Goods Transport and the Passenger Transport. It is ideal for the transport of people and goods alike, and it can accommodate up to nine occupants. Model designations were Ducato 10 (1 ton), Ducato 14 (1.4 tons) and Ducato Maxi 18 (1.8 tons).

On 15 December 2005, the three millionth vehicle was produced, which resulted in the rate of production increasing to nine vehicles per day. This generation is also produced at the Iveco plant in Sete Lagoas (Brazil), at the Fiat Auto Poland Tychy plant in complete knock down[8] and since 2006 in Elabuga, Russia (Fiat-Sollers).

This third generation Ducato has been available in Mexico since November 2007, and over 30 different models are available. It is marketed as the Fiat Ducato, and as the Peugeot Manager. These models are similar to the European configurations with smaller engines, available diesel, and manual transmissions,[11] although the Canada & US version, with larger gasoline engines and automatic transmissions is made in Mexico.

Since October 2013 Fiat Chrysler Automobiles's Ram Trucks brand has marketed the Ducato as the Ram ProMaster in Canada and the US. Since the 2009 bankruptcy of Chrysler and subsequent acquisition by Fiat, Chrysler had not offered a large van in this market. Dodge Trucks (the brand name used by Chrysler prior to the inception of the Ram brand) had offered a version of the Mercedes-Benz Sprinter van starting in 2003, and earlier the Dodge Ram Van. The ProMaster is produced in FCA's Saltillo, Mexico plant.

Traditional commercial vans in this market are heavy body-on-frame based on pickup trucks. The ProMaster has a unibody construction and front-wheel drive. This gives it a lower floor height, which improves cargo loading. Front-wheel drive also improves handling and safety.[12]

The most significant difference between the ProMaster and the Ducato is the availability of a 3.6 L 24 valve V6 gasoline Chrysler Pentastar engine offered in conjunction with the Chrysler 62TE six speed automatic transmission as standard equipment. The Iveco 3.0 L 16-valve I4 diesel JTD engine, branded as EcoDiesel by Chrysler, mated with the M40 six speed automated manual transmission was offered in model years 2014 through 2016; however, the gasoline V6 is currently the sole engine available in the ProMaster.

For the 2019 model year, the ProMaster received a new front fascia, replacing the "Cross-Hair" grille with a new "RAM"-lettered front grille. The 3.0L EcoDiesel Inline Four-Cylinder (I4) turbodiesel engine was also discontinued, leaving the 3.6L Pentastar V6 gasoline engine with Variable Valve Timing (VVT) as the only engine choice for the ProMaster. The previously-optional five-inch Uconnect 3 touchscreen radio was made standard equipment to comply with the Federal Motor Vehicle Safety Standards (FMVSS) requiring that all vehicles with GVWR of 10,000 lb (4535 Kg) or less manufactured after April 2018 provide a rearview camera.

Window Van/Glazed Van: The ProMaster window or glazed van does not have rear seats. However, it can be converted into a passenger van before or after sale; buyers and dealers choose the configuration for the van. It can be configured for personal or bus use, or as a law enforcement transporter. The window van is available as a high-roofed model in 2500 and 3500 chassis.

Chassis Cab: The chassis-cab is used as a flatbed truck and a box van. The box van can be used as a street vending van, an ambulance, or a delivery van. It is available in all sizes.

Cut-Away: Cutaway van chassis versions are traditionally used for motor homes. Collins Group in partnership with REV Group also produces the NexBus school bus line with this type of chassis. It is available in all sizes.

Ambulance: Different companies are converting high roof Fiat Ducattos in to ambulances for frontline A&E work as well as using the passenger van and converting them to be used as patient transport vehicles. FR Conversions builds two different ambulances on the ProMaster 2500 and the 3500. These type II ambulances take advantage of the wider chassis and lower decks to offer the space of a type III ambulance in a type II.

Note: for some versions/markets the previous engines are still available.

The fourth generation Ducato/Jumper/Relay/Boxer (platform designation X290) was introduced in the summer of 2014. Although based on the third generation model, it features a heavily revised front end, with more car like headlight styling. Euro 6 engines were introduced for the 2017 model year in late 2016, and does not require Adblue (Fiat version only) unlike most of its competitors.[14] The Ram Promaster was later facelifted in 2018 for the 2019 model year with revised grille, increased payload and improved towing capacity[15]