A mechanic that rode along with a racecar during races 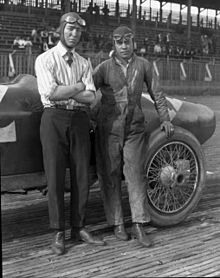 1922 Indianapolis 500 winner Jimmy Murphy is shown here with his riding "mechanician" Eddie Olson, posing next to their Duesenberg at Tacoma Speedway.

A riding mechanic was a mechanic that rode along with a race car during races, and who was tasked with maintaining, monitoring, and repairing the car during the race. The various duties included manually pumping oil and fuel, checking tire wear, observing gauges, and even massaging the driver's hands.[1] They also communicated with the pits and spotted from inside the car.[2] If the car ran out of fuel, or otherwise broke down, the riding mechanic was usually responsible for running back to the pits to fetch fuel or the necessary spare parts.

Riding mechanics were also referred to by the term mechanician. The position is largely associated with the early years of Championship car racing and the Indianapolis 500; however, they were also utilized in grand prix racing for a period of time. 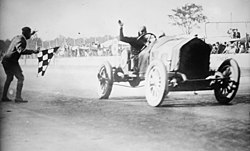 Riding mechanics were used by most cars in the Indianapolis 500 from 1911 to 1922, and again from 1930 to 1937. In the first 500, driver Ray Harroun notably drove solo, the only car in the field without a riding mechanic. He famously affixed a rear-view mirror to the car, in order to see cars behind him (a task normally assigned to the mechanic). Harroun is famously regarded as the first driver to utilize a rear view mirror on a race car, however, he said he got the idea from seeing a mirror used for the same purpose on a horse-drawn vehicle in 1904.[3]

Starting in 1912, the AAA Contest Board declared that riding mechanics were made mandatory for all races of 100 miles or longer (which included Indianapolis).[4] In 1923 riding mechanics were made optional, and only one team utilized them.[4] They were brought back from 1930 to 1937 and made mandatory once again. From 1938 on, they were again declared optional, but no teams in the starting field used one ever again. In the years immediately following WWII, nearly all two-man cars had been parked, or converted to single-seaters. Riding mechanics were not formally written out of the rule book until 1964.[4]

The mechanics sat in a passenger seat, typically to the outside of the driver, a precarious position close to the retaining wall.[5] Some cars, however, did have the positions reversed, with the riding mechanic on the inside. Due to the close quarters, many were of short stature and small build. 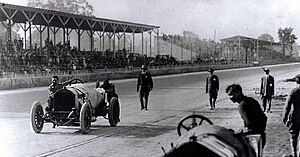 Driver Ralph DePalma and riding mechanic , pushing the Mercedes down the main straightaway at the conclusion of the 1912 500-Mile Race