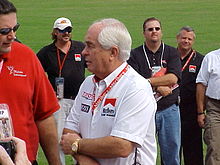 Sports Illustrated named him Sports Car Club of America Driver of the Year in 1961.[1] After retiring from driving a few years later, he created one of the most successful teams in IndyCar Series and NASCAR racing. He is the most successful owner in the Indianapolis 500 with 18 victories. He is known by his nickname of "The Captain".[2] In addition, Penske serves as a race strategist for his IndyCar team, currently for driver Will Power.[3]

Penske is a corporate director at General Electric and was chairman of Super Bowl XL in Detroit, Michigan. He was previously on the board of The Home Depot and Delphi Automotive before resigning to chair the Detroit Super Bowl Committee. He has an estimated net worth of $1.83 billion as of 2018.[4]

Penske was awarded the Presidential Medal of Freedom in 2019.

Penske was born in Shaker Heights, Ohio in 1937.[5] His father, Jay, was a successful corporate executive for a metal fabrication company and encouraged his son to become an entrepreneur.[6] As a teenager he bought older cars, repaired them and sold them at a profit from his family's home in Cleveland, Ohio.[7] He graduated from Shaker Heights High in 1955, and is a 1959 graduate of Lehigh University, where he was a member of Phi Gamma Delta.[8]

Penske's first racing venture was in hillclimbing, but then ran road course racing in Porsches.[9] Penske made his first professional racing start at the now-abandoned Marlboro Motor Raceway in Upper Marlboro, Maryland.

By 1960, he was a well-known race car driver (Sports Illustrated SCCA Driver of the Year). He competed in two Formula One Grands Prix, and won a NASCAR Pacific Coast Late Model race at Riverside in 1963. He never ran the Indianapolis 500: he was offered a rookie test at Indianapolis, but turned it down for business reasons; rookie Mario Andretti stepped in for Penske to take that test.

Penske continued racing until 1965, when he retired as a driver, to concentrate on his first Chevrolet dealership in Philadelphia, Pennsylvania.[10] 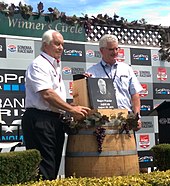 Penske Racing debuted in 1966 at the 24 Hours of Daytona,[11] after Penske had retired from race driving. His team first competed in the Indianapolis 500 in 1969, winning that event in 1972 with driver Mark Donohue, and their first NASCAR win was in 1973. His teams have won many races in the subsequent years. He closed his European-based Formula One business in 1977.

Penske Racing now operates an IndyCar Series team composed of Josef Newgarden, Simon Pagenaud and Will Power, as well as Hélio Castroneves on an Indy only basis, and a NASCAR team with drivers Brad Keselowski, Joey Logano, and Ryan Blaney. Previously, Penske Racing ran cars in the CART series that included some of the best drivers of the time, including Gary Bettenhausen, Tom Sneva, Mario Andretti, Bobby Unser, Al Unser, Al Unser, Jr., Emerson Fittipaldi, Rick Mears, Danny Sullivan, Paul Tracy and Gil de Ferran. After many years of trying, his team won the Daytona 500 in 2008 with Ryan Newman driving. Penske, would later win another Daytona 500 in 2015 with Logano behind the wheel.

In 2005, Porsche set the stage to make a comeback in sports car racing in the United States and chose Penske Racing to run in the LMP2 class of the American Le Mans Series (ALMS). The Penske Porsches took center stage in 2006, winning immediately, including victories at Mid-Ohio finishing 1-2 ahead of Audi (competing in a higher classification) and the annual Petit Le Mans, a 10-hour showcase event held at Road Atlanta. His team scored an overall victory in the 12 Hours of Sebring in 2008.

In 2009, Penske suspended his participation in the ALMS, switching to ALMS's rival Grand-Am Rolex Sports Car Series for the full season. They used a Porsche-powered Riley with Timo Bernhard and Romain Dumas driving.

Penske purchased the old Matsushita air conditioning plant in Mooresville, NC and reconditioned it to consolidate his racing business. All of Penske's racing operations are under one roof, with his IndyCar, NASCAR, and American Le Mans Series (through 2009) teams sharing over 424,000 square feet (39,400 m2) of space encompassing 105 acres (42 ha).

In late 2014, it was announced Penske would take a 51% stake in Australian V8 Supercars team Dick Johnson Racing, forming DJR Team Penske. The team entered one car in 2015, initially for Marcos Ambrose before he stepped aside to make way for Scott Pye. The team expanded to a second car for New Zealander Fabian Coulthard in 2016, before Pye was replaced with another Kiwi in Scott McLaughlin in 2017. Coulthard won the combined team's first championship race at the 2017 Tyrepower Tasmania SuperSprint. In 2019 the team won the biggest race of the year, the Bathurst 1000.

On September 16, 2018, driver Brad Keselowski won the South Point 400 at Las Vegas Motor Speedway, giving Roger Penske his 500th race victory as an owner across all racing series. Later the same season, Joey Logano would clinch the championship at Homestead-Miami Speedway, winning Penske his 2nd Championship in the Cup series.[13]

An avid car collector, he owns many rare American and European automobiles, including a Ferrari FXX, of which only 30 were made.

Penske Racing donated $500,000 to Restore Our Future, Mitt Romney's Super PAC.[14] Penske was discussed as a potential candidate for Mayor of Detroit, but he declined to run.[15]

Penske is chairman of Penske Corporation, based in Bloomfield Hills, Michigan. Some of the company's holdings include Penske Automotive Group, an international company that operates automobile dealerships in the United States, Canada and parts of Europe; Penske Truck Leasing, a truck sales, leasing, and fleet maintenance company; Penske Motor Group which has dealerships in California and Texas. On November 4, 2019 Penske purchased the Indianapolis Motor Speedway, a 2.5-mile course in Speedway, Indiana, the Indianapolis 500-mile race and IndyCar from the Hulman Family for an undisclosed amount.[16]