The Rollin Motors company was an American automobile manufacturer from 1923 until 1925 and founded by Rollin Henry White.[1] The company was based in Cleveland, Ohio.[2]

The Rollin automobile[3] had advanced technology, brakes on all four wheels (mechanical internal expanding type), pistons and connecting rods of special aluminum, lubrication oil through a pump and a four-bearing crankshaft.[4] There were four models: Touring ($ 995.00) , Brougham, Sedan and 3 passenger Coupe. Cars were sold in USA, Australia and a very few to Europe. Designed and built by Rollin H. White, formerly chief engineer of the White Motor Company. The car was planned as an economical automobile to capture a share of the low price market. Its engine was similar to that of the Cletrac tractor, a White subsidiary. The chairman was Rollin Henry White. His father, Thomas White, was owner of The White Sewing Machine Company , White Steamer and the White Motor Company. The Rollin was too high-priced for the market for which it had been intended. In its most successful year, 1924, approximately 6,500 units were produced. By the end of 1925 the factory was closed due to bankruptcy.[5] As of 2018, there are several Rollin automobiles in the USA and in Australia, as well as a few in Europe, at least one in the Netherlands and two in Sweden. In December 1924 the car carrier “Lakeland” transported on Lake Michigan several new automobiles. The “Lakeland” sank with at least twenty-two model-year vehicles aboard from Nah, Kissel, and Rollin motor companies. Recreational divers recovered one Rollin automobile in 1979[6].

Emblem of a Rollin - oldtimer

serial plate of a Rollin 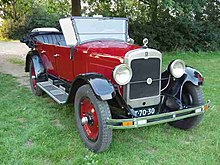