This article is about the General Motors subsidiary. For other uses, see Saturn (disambiguation).
US car manufacturer from 1985 to 2010

The Saturn Corporation, also known as Saturn LLC, was an American automobile manufacturer, a registered trademark established on January 7, 1985, as a subsidiary of General Motors.[1] The company marketed itself as a "different kind of car company" and operated somewhat independently from its parent company for a time with its own assembly plant in Spring Hill, Tennessee, unique models, and a separate retailer network,[2] and was GM's attempt to compete with Japanese imports and transplants in the US compact car market.

Following the withdrawal of a bid by Penske Automotive to acquire Saturn in September 2009, General Motors discontinued the Saturn brand and ended its outstanding franchises on October 31, 2010.[3][4] All new production had already been halted on October 7, 2009.[5]

In the mid-1980s, GM released the Saturn Concept Car. The car, which resembled the first Saturn SL, was not originally meant to start up a brand; however, GM planned to release the Saturn car under one of its brands, which, at the time, were Chevrolet, Pontiac, Oldsmobile, Buick, Cadillac and GMC. In 1985, GM changed their plan and founded Saturn as its own brand, with its first cars being the Saturn SC and Saturn SL. Production of both Saturn vehicles started in 1990 as early 1991 model year vehicles. The Saturn SW was later added for 1993. GM had plans for a sedan, a coupe, a convertible, a wagon, and even a sport utility vehicle; however, Saturn's first sport utility vehicle, the Vue did not appear until the 2002 model year. and Saturn's first convertible the Sky did not appear until the 2006 model year.

On July 30, 1990, the first Saturn was built, a red 1991 model-year Saturn SL2. The first Saturn dealership opened in Memphis, Tennessee. Saturn Corporation was launched as a "different kind of car company", and Saturn even had its own unique car models (although later models shared platforms with other GM vehicles to be more cost effective in the market), and their own dealership network that was separate from the rest of GM.

Results at Saturn, however, were more doubtful than positive. According to The Wall Street Journal, the project was too ambitious, as "everything at Saturn is new: the car, the plant, the workforce, the dealer network and the manufacturing process. Not even Toyota, a highly successful and experienced automaker, tackles more than two new items on any single project." While Saturn cars proved very popular with buyers,[citation needed] actual sales never met the optimistic projected targets, in part because of the early 1990s recession. It also proved cannibalistic as 41% of Saturn buyers already owned a GM car. Its separation from the rest of its GM parent, plus the fact that it drained $5 billion from other car projects, stirred discontent within GM's other divisions. Also, Saturn opened at considerably higher cost than the Japanese transplants (factories that Japanese automakers established in the United States). [7][8]

Nonetheless, the brand was immediately known for its "no haggle" prices. The first Saturn model, the S-Series, was significantly successful.[citation needed] A year later, Saturn hit the Canadian market. In 1993, Saturn's 500,000th car, "Carla", was built. In May 1995, Saturn's 1 millionth car entered the market. In 1996, Saturn dealerships distributed the electric GM EV1, the first electric car released under the GM marque. In 1997, Saturn became the first General Motors North American vehicle to be fully built with right-hand-drive on the same assembly line as the left-hand-drive vehicles (the previous right-hand-drive GM North American vehicle were built in countries with left-hand road rule using knock-down kit and customized dashboard and steering components) as it entered the Japanese market.[citation needed] In January 1999, Saturn rolled out its two millionth car.

By the time the Saturn brand was launched in Japan, however, the Japanese economy was already in a sharp decline following the 1990 collapse of the Japanese asset price bubble.

Saturn's first compact crossover SUV was introduced in 2001 for the 2002 model year as the VUE based on a globally used GM design. In 2002 for the 2003 model year, Saturn introduced the ION as a replacement for the S-Series. In 2004 for the 2005 model year Saturn began selling the RELAY a minivan and the first Saturn based on similar models from other GM brands. That same year, the L-Series was discontinued. The Sky roadster was introduced in 2006 as a 2007 model. In 2006 for the 2007 model year, the AURA midsize sedan made its way to dealerships, alongside the Outlook, a larger CUV than the Vue, and 2006 was the last year that the Ion was produced. The Ion was replaced by the European-built Astra in 2008. During the 2008 North American International Auto Show (NAIAS), Saturn revealed its Flextreme concept vehicle, which was a rebadged Opel Flextreme.[6]

Saturn was believed to have had a disagreement with GM and were not very accepting of the company closing. In 2004, GM and the United Auto Workers dissolved their unique labor contract for the Spring Hill manufacturing plant, allowing Saturn operations to be integrated with the rest of GM.[9]

In US Congressional hearings on December 2, 2008, General Motors announced its intentions to focus on their four core brands (Chevrolet, Buick, Cadillac and GMC), with the sale, consolidation, or closure of Saturn and the remaining brands (Pontiac, Hummer, and Saab, with Oldsmobile having already discontinued production in 2004).[10] General Motors chairman and former CEO Rick Wagoner announced during a news conference on February 17, 2009, that Saturn would remain in operation through the end of the planned life cycle for all Saturn products (2010–2011).

In February 2009, GM declared its intent to part with this brand by closing or selling the division, either to investors or to dealers, as part of restructuring plans dependent upon the receipt of a second round of government loans ("bailout" funding).[11] It was the third such action for GM in the 21st century, following those of Oldsmobile, which ceased production in 2004, and Pontiac, which ended production for the 2010 model year by the end of 2009.[12]

General Motors announced in June 2009 that it was selling the Saturn brand to Penske Automotive Group.[13] The arrangement was similar to the deal under which Penske distributes Daimler AG's Smart Car in the United States.[14] Penske was not planning to buy the factories so it would eventually have had to contract other car companies to build cars sold as Saturns. GM would have built the Aura, Vue, and Outlook for Penske for the first two years. To replace GM as the brand's manufacturer, Penske was in discussions with several global automakers, including Renault Samsung Motors of Korea, and the Renault-Nissan Alliance.

On September 30, 2009, Penske ended its deal with General Motors because of Penske not finding another manufacturer to manufacture the Saturn cars. At one point Penske was in talks with some car manufacturers including Renault Samsung Motors and the Renault-Nissan Alliance, however talks with the Renault-Nissan Alliance had ended mainly because of objections from the Nissan part of the alliance. Another part of the deal between Penske and GM was for GM to continue making the Aura, the Outlook, and the Vue until 2011, and then another manufacturer would take over, but since Penske didn't find another car manufacturer that was willing to continue production of Saturn vehicles, the deal between Penske and GM ended. As a result of this, General Motors announced that the Saturn brand would be discontinued in 2010, and that all Saturn dealerships would be closed by October 31, 2010, or until all of their inventory had been sold.

In February 2010, as a means of customer retention, GM announced that it was offering existing Saturn owners up to US$2,000 in incentives to purchase a new Chevrolet, Buick, Cadillac or GMC vehicle until March 31. Customers were required to have owned their Saturns for at least six months and were not required to trade them in to be eligible for the incentives.[16]

Originally, the company's products used a dedicated platform called the Z-body and a dedicated engine, the 1.9 L Saturn I4 engine, and a dedicated plant in Spring Hill, Tennessee. All of the original Saturns featured dent-resistant plastic body panels which were also touted as allowing the company to change the look of the vehicles readily. However, in practice, the company did not often take advantage of this capability.

The Saturn S-Series family of cars were produced from 1991–2002. S-Series cars had three generations: First generation cars were produced from 1991–1995. For the 1995 model year Saturn used a "first generation" exterior and "second generation" interior. The exterior of the 1995 model looked the same as the first generation cars, but it had larger gauge faces on the instrument cluster and a redesigned center console. First generation engines were rated at 85 horsepower (63 kW) for the single overhead cam engines, while the dual overhead cam engines were rated at 124 horsepower (92 kW) for the entire run of S-Series cars (1991–2002). In 1996, the second generation S-Series sedan was introduced. Changes that carried through until 1999 included a redesigned body and single overhead cam power being increased to 100 horsepower (75 kW). The third generation sedan received only minor design changes for the 2000-2002 production run. Most notably, the exterior body panels were updated once again, and new paint colors were offered. The sedan retained many of the same mechanical components with an updated interior design. In 1997, the second generation of the sport coupe model was introduced with a more scooped headlight front. The 1999 Coupe models received a suicide door behind the driver side door. The S-Series was produced in three variations: Coupe (SC), Sedan (SL), and Wagon (SW). The wagon was introduced for the 1993 Model year and it was produced until 2001.

The first significant change came with the 2000 Saturn L-Series mid-size car. It shared the GM2900 platform with the Opel Vectra, along with its engine. It was built at a GM factory in Wilmington, Delaware. The 2000 model year cars were designated LS-1 (4 cylinder) and LS-2 (6 cylinder.) However, as Lincoln-Mercury owned the LS designator, and to prevent a lawsuit, Saturn changed the designators to L200 & L300 for the model years 2001-2005. The Saturn L200 was discontinued after the 2003 model year. In 2003, the Saturn ION replaced the S-Series compact.

The production of the Saturn Ion was temporarily stopped for three weeks in 2003 due to Saturn dealerships having an overstock of Ion vehicles.

The Saturn L-Series was discontinued after the 2005 model year due to poor sales.

The 2009 Saturn models were the Sky roadster, the AURA sedan, the Astra hatchback, the VUE small crossover SUV and the Outlook full-size crossover SUV built off the GM Lambda platform.[17] 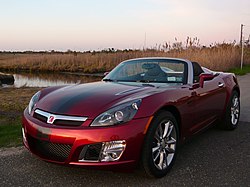