Scripps-Booth was a United States automobile company based in Detroit, Michigan, which produced motor vehicles from 1913 through 1923. 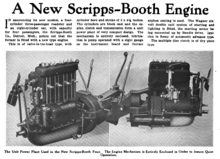 A new Scripps-Booth engine described in the journal Horseless Age, 1916.

The company was founded by artist and engineer James Scripps Booth (of the Scripps publishing family), who also built the Bi-Autogo.[1] Scripps-Booth company produced vehicles intended for the luxury market. In 1916 they consolidated with the Sterling Motor Company to become the Scripps-Booth Corporation.[2] By this time Scripps-Booth had been purchased by Chevrolet whose founder William C. Durant was also the founding president of Sterling Motor Company.[3] General Motors discontinued the brand name in 1923.

Before marrying the main character in John O'Hara's 1934 novel Appointment in Samarra, a youthful Caroline Walker drives a Scripps-Booth Model C Roadster. The car's unusual seating arrangement, in which "the driver sat a foot or so forward of the other seat, which made kissing an awkward act," is especially noted.[12]