Spec Miata was first approved as a regional class in the Southwest Division of SCCA in 1999 and the first race as an official class was at the Fiesta Carrera Regional, Texas World Speedway 2.90 road course on July 24, 1999, at 1:05 pm and included a starting field of four drivers: Tim Evans, Shannon McMasters, Bob Reinhardt and David Obeney finishing in that order.

The first Spec Miata race for the National Auto Sport Association[1] was held in February 2000 by the NorCal Region. At the national level, the "UPR Racing Supply First Ever Spec Miata National" was held in Avondale, Arizona, at Phoenix International Raceway's infield road course on January 13, 2006 with Brad Rampelberg as the "First Ever" national race winner.

Mike Helpin, a local highly respected racer was awarded the 1st place trophy because Brad Rampelberg was disqualified for an undisclosed reason. Brad's disqualification was later overturned by a SCCA board. Brad Rampelberg was named winner in later posted results. As its name shows, Spec Miata is a "specified" class. This means that the rules for allowable modifications to the car are very strict. The class intends to put drivers on a very even footing by making their cars as identical as possible. The rules are far more conservative than the Improved Touring category, but provide equivalent safety measures.

Because of the support of Mazda through Mazdaspeed, the wide availability of the car on the used market, plentiful and inexpensive parts, and the simplicity of maintenance on the cars, Spec Miata has become a very popular class. Also adding to the appeal is the fact that a Spec Miata can be raced in both SM and ITA/ITS in SCCA regional competition. A typical race-ready Spec Miata can be purchased on the market for $8000–$35,000 depending on race win history and specific modifications. A new MX-5 Cup (professional class) based on the ND series MX-5 costs $58,900 new, and champions of the national series can win over $200,000 to advance up the motorsport ladder.

In August 2019, Mazda Motorsports and Winding Road Racing announced Spec MX-5, a racing class structure based around the MX-5 NC that is designed to be an affordable, tech-able, reliable and fun-to-drive option for club racers. Race cars in the division will feature Roush Performance cylinder heads, Penske Racing shocks, Eibach springs and sway bars, Pagid brake pads, Toyo tires, and more, and will have a curb weight of 2,500 lb (1,100 kg). Spec MX-5 will have select events starting in 2020.[2]

This section is not an exhaustive set of rules; it is intended to give an idea of the preparation level of the cars in this class. 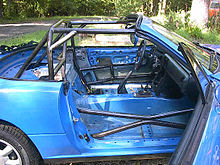 Spec Miatas used a specific Bilstein shock with an adjustable coil-over suspension with Eibach springs and adjustable front and rear sway bars. Beginning in 2019 the Bilstein shock is being phased out in favor of a Penske shock. Top mounts are different but otherwise the new setup retains the coilover sleeve and spring from the previous Bilstein setup.

Depending on the club, Toyo or Hoosier tires are specified. For SCCA SM, the Hoosier SM7 is the dry tire and H2O is the wet tire. For NASA, the Toyo RR is the dry tire and RA-1 is the wet tire. (205/50R15) is the spec tire size. Hoosier Tires[3] will provide the spec tire for all National SCCA Events. The wheel size is fixed at 15 × 7, with the wheels weighing no less than 13 pounds.

The 1.8 liter displacement cars may not run an aftermarket air intake and NB models must run a throttle restrictor, while the 1.6 liter displacement cars do not require a restrictor, they may run a modified air box, and may remove the driver corner light. The class calls for "stock" engines with some modifications allowed in the name of balancing factory tolerances. Engine builders have been taking advantage of this for years, and "Top Prep" engines make 10-20 horsepower more than a healthy stock engine and cost several thousand dollars. The full rules for the class may be found in the current Spec Miata Category Specifications of the SCCA rule book, called the GCR (General Competition Rules & Specifications).[4]