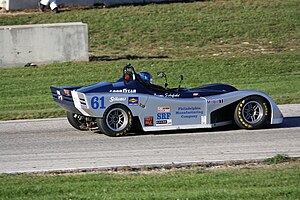 Spec Racer Ford is a class of racing car used in Sports Car Club of America (SCCA) and other series road racing events. The Spec Racer Ford, manufactured and marketed by SCCA Enterprises (a subsidiary of SCCA, Inc.), is a high performance, closed wheel, open cockpit, purpose-built race car intended for paved road courses, such as WeatherTech Raceway Laguna Seca, Buttonwillow Raceway Park, Road America, Watkins Glen, and many other tracks throughout North America. With more than 1,000 cars manufactured, it is the most successful purpose built road racing car in the United States.

Spec Racer was first conceived as low-cost sports racing class by a director of the Sports Car Club of America (SCCA), Ted Cronin, in the early 1980s. The car was developed and originally manufactured by Renault/Jeep Sport USA in Livonia, Michigan under direction of Vic Elford. The car, designed by Roy Lunn, was introduced into SCCA Club Racing in 1984 as "Sports Renault." After Renault bowed out of the program in 1989, the car was renamed "Spec Racer (SR)." The original Sports Renault/Spec Racer is now an SCCA Regional-only class and a few Renault powered cars still compete in National Auto Sport Association (NASA), Midwestern Council of Sports Cars Club (MCSCC) and (IMG) events. By 1994, the supply of rebuildable 1.7-liter Renault engines was drying up in the United States. The SCCA made the decision to replace the original Renault drivetrain with a 1.9-liter engine and five-speed transmission manufactured by the Ford Motor Company. This change gave the SRF an additional 10 horsepower (7.5 kW) to 105 - enough to push the cars along at speeds up to 135 mph (217 km/h). Ford Motor Company started to provide a new drivetrain in 1994 and the cars with the Ford powertrain renamed "Spec Racer Ford (SRF)." For a period of time, both Spec Racers (Renault powered) and Spec Racer Ford (Ford powered) both raced in the SCCA. Other more recent changes to what is now called "Spec Racer Ford" include the now-standard "tallman kit", which is an extension of the original rear roll hoop (which was designed too low), Penske shock absorbers in addition to the original Konis, Butler Built driver seat, alloy wheels, rear wheel well cutouts, engine coolant recovery system, adjustable fuel pressure regulator, a safety modification to the brakes and an optional, smaller alternator. During the life of the car, there have been some incremental changes in various parts to increase durability. Tires are Hoosier Racing Tire radials in both dry and rain tire versions, specifically manufactured for the SRF. The SRF still uses the original Renault brake calipers (with the option to change to an updated Wilwood caliper), outer CV joints, and suspension knuckles.

In early 2013, SCCA Enterprises announced a third generation (GEN3) Spec Racer Ford powered by a 1.6-liter 4-cylinder, 135 HP Ford engine fitted to the existing engine mounts and transmission. On-track testing by a fleet of test cars was conducted during 2013 and 2014 for a roll-out into SCCA competition in 2015. As of 2015, the new SRF3, GEN3 class was created and is now racing alongside the previous GEN2 (1.9-liter) cars. The existing Ford 1.9-liter Spec Racer (SRF) will continue to be eligible for SCCA Club Racing a separate National class until the end of 2017 after which it will remain competing in SCCA Club Racing as a Regional-only class.

A new alternate "SRF4" iteration is under development as a future additional class. This class will feature a six-speed sequential gearbox manufactured by SADEV, as well as a revised throttle body and updated electronics. Currently, only SRF3 cars race in SCCA Major, Divisional, Regional and some SCCA Pro Racing events. In the future, SRF3 and SRF4 will race in SCCA.

The SRF rules dictate that no performance enhancing modifications other than suspension adjustments within described parameters can be made to the car. This effectively eliminates the never-ending need for design enhancements and associated large cash outlays necessary in other classes of racecars to remain competitive and puts the focus on driver skill, rather than financial and technical investment. Every Spec Racer Ford weighs the same using ballast that can accommodate drivers who weigh up to roughly 260 pounds, uses the same engine, the same transmission, the same fiberglass body, the same chassis, even the same tires. The idea is that all of the cars are meant to have identical performance, so the only way to go faster is to be a better driver. The SRF's engine, transmission, and shock absorbers are sealed with tamper-proof devices that make it impossible to modify these components undetected. In addition, many parts of the car, including suspension arms, fiberglass, and sheet metal are marked for compliance checking with special holographic tamper-evident stickers bearing the Spec Racer Ford logo. SCCA Enterprises periodically deploys compliance officials to conduct surprise inspections of Spec Racer Fords at SCCA Major, SCCA Regional and SCCA Pro Racing events across the US.