Sterling Trucks Corporation (commonly designated Sterling) was an American truck manufacturer. Founded in 1998, Sterling was created following the 1997 acquisition of the heavy-truck product lines of Ford Motor Company by Daimler AG (the parent company of Freightliner).[1] Taking its nameplate from a long-defunct truck manufacturer, Sterling was slotted between Freightliner and Western Star within the Daimler product range (later Daimler Trucks North America).

Introduced as a rebadged version of Ford Louisville/Aeromax product line, the Sterling product range was expanded in the 2000s with medium-duty (Class 5-7) trucks. After years of struggling to meet sales expectations, Daimler discontinued the Sterling Trucks line for 2009.[1]

A street-cleaning truck in Seattle by the original Sterling company

The company was founded in 1907 by William Sternberg as the Sternberg Motor Truck Company of Milwaukee, Wisconsin. Early models offered were of cab-over design, in 1-, 1.5- 3.5- and 5-ton capacities. Sternberg changed the company name to Sterling at the onset of World War I. Sterling built many different heavy-duty trucks for commercial, construction and military customers in the ensuing years.

The company was bought by White Motor Company on June 1, 1951. About two years later, the Sterling nameplate was retired.

As the Sterling trademark had become dormant for so long, when Freightliner (whose own trucks were distributed by White Motor Company from the 1950s to 1975) sought to use the name in 1997, there were no grounds for objection from Volvo.

Sterling built class 8 tractors, as well as a range of medium- and heavy-duty cab/chassis vehicles. With bodies added by third-party upfitters/body builders, these cab/chassis vehicles were used for freight distribution as well as heavy vocational uses, such as construction, snow plowing and refuse collection.

In the last few years of operation, the company also marketed light medium-duty cab/chassis vehicles manufactured by Mitsubishi Fuso (Sterling 360 models) and Dodge (Sterling Bullet models). These were typically outfitted with bodies suitable for use as lighter — those designed to perform jobs other than straight freight hauling — including fire trucks, garbage trucks, dump trucks, concrete mixers, tanker trucks, and snowplows. 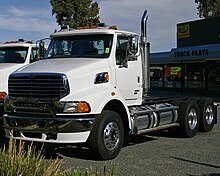 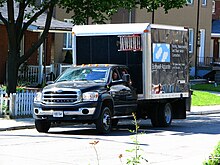 On October 14, 2008, Daimler Trucks North America announced a plan to discontinue the Sterling product line in an effort to consolidate its North American truck manufacturing operations under the Freightliner and Western Star brands. The company stopped taking orders for new trucks in January 2009, the St. Thomas manufacturing plant closed in March 2009, and the Portland, Oregon, plant was closed in June 2010.[5]