Steve Nichols (born 20 February 1947 in Salt Lake City, Utah) is an American engineer who is best known as a car designer for many Formula One teams from the mid-1980s until 2001. 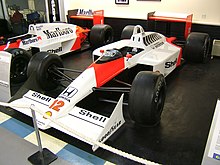 Nichols graduated from the University of Utah in 1972. He began his career as a development engineer at Hercules Aerospace in 1973. In mid-1980 he moved to motorsport and joined McLaren in Formula One. In 1987 he became head car designer in McLaren following the departure of John Barnard to Ferrari.

His first car, the McLaren MP4/3 powered by the turbocharged TAG-Porsche V6 engine, carried Alain Prost to three victories in 1987, the last of which being the 1987 Portuguese Grand Prix where Prost scored his 28th win, passing Jackie Stewart's record of 27 that had stood since 1973. McLaren's second team driver Stefan Johansson, scored five podium finishes during the season. At the end of the season, the MP4/3 had given McLaren second place behind Williams in the Constructors' Championship.

Nichols' second car was the highly successful McLaren MP4/4, powered by a turbocharged Honda V6. The MP4/4, driven by Ayrton Senna and Alain Prost, almost completely dominated the 1988 season with 15 race victories from 16 races, as well as 15 pole positions. The only race the MP4/4 didn't win was the Italian Grand Prix which was won by Gerhard Berger's Ferrari. Berger also claimed the only non-McLaren pole of the year at the British Grand Prix. McLaren won the 1988 Constructors' Championship by a record 134 points from Ferrari, having wrapped up the title in Round 11 in Belgium. Senna and Prost also finished the Drivers' Championship in first and second place, giving the talented Brazilian his first World Championship.

While there have been claims that the design of the MP4/4 was based on the Brabham BT55 designed by Gordon Murray in 1986, and indeed a number of articles give Murray the credit for designing the MP4/4, many at McLaren, including team manager Jo Ramírez, have pointed out that the MP4/4 was actually a development of the MP4/3 and that Murray, who became McLaren's Technical Director in 1987, had very little to do with the design of either of Nichols' cars.

At the end of 1989, Nichols decided to follow Alain Prost and moved to Ferrari. Prost won five races and was a serious contender for the world title until a controversial collision triggered by Ayrton Senna put both drivers out of the race at the Japanese Grand Prix. Nichols stayed at Ferrari until December 1991, and later joined Sauber to help Peter Sauber move into Formula One. In 1993 he moved to Jordan as chief designer; later in 1995 he was back at McLaren as a technical consultant. He assisted McLaren back to the front of the grid and winning the world title in 1998 and 1999.

In 2001 he joined Jaguar Racing as technical director.[1] Although his success gave the first podium for Jaguar in Monaco, Nichols left at the end of the 2001 season.