Skip to content
Former Single-Seater Racing Championship
Not to be confused with Super Formula.

In 2009, the second season was won by English club Liverpool F.C., driven by Spanish racer Adrián Vallés. The season consisted of six double-headers, featuring 19 clubs, and brought first victories for Tottenham Hotspur, FC Basel 1893, Rangers F.C., Olympiacos CFP, Sporting CP, R.S.C. Anderlecht and Galatasaray S.K.. This was the first season to feature the Super Final format, adding a six car shootout to four of the six rounds. The races were broadcast in 62 countries to a reach of 100 million people.[7] 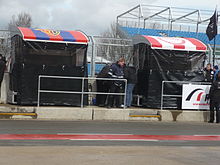 Superleague Formula's race format incorporated a Saturday qualification and races on Sunday, one with a reverse grid. For each round, the competing teams competed for prize money, plus points in a yearly championship. 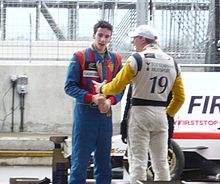 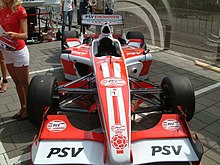 The cars were built by Panoz Auto Development under the Élan Motorsport Technologies banner and officially named the Panoz DP09. They are powered by 750 bhp, 4.2 litre, V12 engines designed by US-owned . The cars complied with the same safety standards as 2008 Formula One cars.[19] Élan previously manufactured the Panoz DP01 for the Champ Car series, as well as cars for other championships.

On 14 January 2010, Menard Competition Technologies received a Motorsport Industry Association's award for Technology and Innovation for its "outstanding design and engineering work undertaken on the Superleague V12 racing engine".[23]

A video game for Superleague Formula was made by and Image Space Incorporated and released for PC on 31 October 2009, although it was originally announced to be released in September.[24] The game, released for download by the series' official website, featured 18 clubs and 6 circuits from in the 2009 season. During the 2009 Donington round some star drivers tested out the new game and gave it positive feedback.[25]