The Targa Florio was an open road endurance automobile race held in the mountains of Sicily near the island's capital of Palermo. Founded in 1906, it was the oldest sports car racing event, part of the World Sportscar Championship between 1955 and 1973. While the first races consisted of a whole tour of the island, the track length in the race's last decades was limited to the 72 kilometres (45 mi) of the Circuito Piccolo delle Madonie, which was lapped 11 times.

After 1973, it was a national sports car event until it was discontinued in 1977 due to safety concerns. It has since been run as a rallying event, and is part of the Italian Rally Championship.

The race was created in 1906 by the wealthy pioneer race driver and automobile enthusiast, Vincenzo Florio, who had started the Coppa Florio race in Brescia, Lombardy in 1900. The Targa also claimed to be a worldly event not to be missed. Renowned artists, such as Alexandre Charpentier and Leonardo Bistolfi, were commissioned to design medals. A magazine was initiated, Rapiditas, which aimed to enhance, with graphic and photographic reproductions of the race, the myth of the car and the typical character of modern life, speed.[1]

By the mid-1920s, the Targa Florio had become one of Europe's most important races, as neither the 24 Hours of Le Mans nor the Mille Miglia had been established yet. Grand Prix races were still isolated events, not a series like today's F1.

The wins of Mercedes (not yet merged with Benz) in the 1920s made a big impression in Germany, especially that of German Christian Werner in 1924, as he was the first non-Italian winner since 1920. Rudolf Caracciola repeated a similar upset win at the Mille Miglia a couple of years later. In 1926, Eliska Junkova, one of the great female drivers in Grand Prix motor racing history, became the first woman to ever compete in the race.

In 1953, the FIA World Sportscar Championship was introduced. The Targa became part of it in 1955, when Mercedes had to win 1-2 with the Mercedes-Benz 300 SLR in order to beat Ferrari for the title. They had missed the first two of the 6 events, Buenos Aires and the 12 Hours of Sebring, where Ferrari, Jaguar, Maserati and Porsche scored. Mercedes appeared at and won in the Mille Miglia, then pulled out of Le Mans as a sign of respect for the victims of the 1955 Le Mans disaster, but won the Tourist Trophy at Dundrod. Stirling Moss/Peter Collins and Juan Manuel Fangio/Karl Kling finished minutes ahead of the best Ferrari and secured the title.

The start and finish took place at Cerda. The counter-clockwise lap lead from Caltavuturo and Collesano from an altitude over 600 metres (1,970 ft) down to sea level, where the cars raced from Campofelice di Roccella on the straight along the coast, a straight over 6 km (3.7 mi) longer than the Mulsanne Straight at the Circuit de la Sarthe in Le Mans. The longest version of the circuit went south through Caltavuturo (whereas the shortest version of the open-road circuit went east just before entry into Caltavuturo, through a mountainous section directly to Collesano) through an extended route through elevation changes, and swept through the nearby towns of Castellana and Sottana, twisting around mountains up to the town of Castelbuono and rejoined the most recent version of the track at Collesano. The second version of the track also went south through Caltavuturo and took a shortcut starting right before Castellana to Collesano via the town of Polizzi Generosa. There was a closed circuit called Favorita Park in the Sicilian capital of Palermo used from 1937-1940.

The challenge of the Targa was unprecedented in its difficulty and the driving experience of any of the course variants was unlike any other circuit in the world other than perhaps that of the Nurburgring in Germany. The original Grande 146 km (91 mi) circuit had in the realm of 2,000 corners per lap, the 108 km (67 mi) Medio had about 1,300-1,400 corners per lap and the final iteration of the course, the 72 km (45 mi) Piccolo circuit had about 800-900 corners per lap. To put that in perspective, most purpose built circuits have between 12 and 18 corners, and the longest purpose built circuit in the world, the 13-mile Nurburgring, has about 180 corners. So learning any of the Targa Florio courses was extremely difficult and required, like most long circuits, at least 60 laps to learn the course- and unlike the purpose-built Nurburgring, the course had to be learned properly in public traffic, and one lap of even the Piccolo course would take about an hour to do in a road car- if there was little to no traffic.

Like a rally event (and the Isle of Man TT), the race cars were started one by one every 15 seconds for a time trial, as a start from a full grid was not possible on the tight and twisty roads.

Although the public road circuit used for the Targa was extremely challenging- it was a very different kind of circuit and race from any other race on the sportscar calendar. All of the circuit variations of the Targa were made up of mountain roads, so they were all very slow and twisty, and each had so many corners that lap speeds at the Targa never went higher than 80 mph (128 km/h). Helmut Marko set the lap record in 1972 in an Alfa Romeo 33TT3 at 33 min 41 s at an average of 128.253 km/h (79.693 mph) during an epic charge where he made up 2 minutes on Arturo Merzario and his Ferrari 312PB.[2] The fastest ever was Leo Kinnunen in 1970, lapping in the Porsche 908/3 at 128.571 km/h (79.890 mph) or 33 min 36 seconds flat.[3]

In the late 1960s and early 1970s, race cars with up to 600 hp (450 kW) such as Nino Vaccarella's Ferrari 512S raced through small mountain villages while spectators sat or stood right next to, or even on, the road. Porsche, on the other hand, did not race its big Porsche 917, but rather the nimble Porsche 908/03 Spyders.

Due to safety concerns, especially by Helmut Marko, who called the race "totally insane", the last Targa Florio as a World Sportscar Championship race was run in 1973; when it had become impossible to retain its international status after a number of horrendous and two fatal accidents; one which privateer Charles Blyth crashed his Lancia Fulvia HF into a trailer at the end of the Buonfornello straight and was killed; and another where an Italian driver crashed his Alpine-Renault into a group of spectators, killing one. There were several other accidents during practice for the 1973 event in which a total of seven spectators sustained injuries. The event was won by a Porsche 911 Carrera RSR as the prototypes such as Jacky Ickx's Ferrari suffered crashes or other troubles. The Targa's international demise was compounded because of widespread concern about the organizers' ability to properly maintain the race on such a massive circuit, and there were not enough marshals - most spectators sat too close the roads; and also the international automotive governing body, the FIA, mandated safety walls on all circuits that were going to hold FIA-mandated events from 1974 onwards, and the 44-mile (71 km) length of combined public roads made this simply impossible and totally impractical, especially from a financial standpoint. The Targa was continued as a national event for some years, before a crash in 1977 which killed 2 spectators and seriously injured 5 others (including the driver) sealed its fate. The 1977 race was forcibly taken over by local police and was stopped on the 4th lap, and it also saw 2 other drivers having serious accidents; one of them was critically injured, but survived.

Although the Targa Florio was a rally-type race that took place on closed-off Sicilian public mountain roads with (aside from straw bales and weak guardrails at some of the turns, the latter were installed by the island's government) practically no safety features, only 9 people – including spectators –died at the event over the 71 year and 61 race history using a total of 6 circuit configurations. This amount is relatively small compared to other open road races, like the Mille Miglia, where over a period of 30 years and 24 races, 56 people lost their lives and the Carrera Panamericana, where over a period of 5 years and 5 races, 25 people were killed. This is probably due to the fact that the mountain roads used were extremely slow and twisty, and average lap speeds never reached even 80 mph (130 km/h) even up to the final years of the race's history, even with the very long straight at the northernmost of the track, whereas most road circuits had average speeds anywhere between 110 mph (180 km/h) and even 160 mph (260 km/h).

After winning the race several times, Porsche named the hardtop convertible version of the 911 after the Targa. The name targa means plaque or plate, see targa top.

The Australian-made Leyland P76 had a special version named Targa Florio to commemorate victory by journalist-rallyist Evan Green on a Special Stage of the 1974 London-Sahara-Munich World Cup Rally which was held on the Targa Florio course.[8]

Since 1992 the event has lent its name to a modern recreation, staged half-a-world away in the form of the famous road rally Targa Tasmania held on the island state of Tasmania, off the Southern coast of Australia. There are also the Targa New Zealand since 1995, the Targa Newfoundland since 2002 and Targa Great Barrier Reef since 2018 where it is held in the Far North section of Queensland.

2017 will celebrate the 101st Anniversary of the Targa Florio and the first time the event has left Italy. This is an amazing attraction for Victoria, Australia and all car enthusiasts. The event, tours Victoria’s coast and countryside from November 29 to December 3 and features over 150 of the world’s most admirable cars and is expected to attract fans, celebrities and media from across the globe.

The Targa Florio Australian Tribute (TFAT - https://www.targaflorioaustralia.com/) is a regularity event for classic cars produced in the years between 1906 and 1976. Cars competed over 4 days on Victoria’s open roads at regulated speed. As part of the event there were 56 trials across the 4 days. The inaugural event was a huge success and was repeated in 2018. The 3rd Targa Florio Australian Tribute 2019 will be held in Melbourne, Victoria, Australia, from 27 November to 1 December 2019.

Races between 1955 and 1973 were part of the World Championship, with the 1957 race not a race but a regularity test, following the Mille Miglia accident. 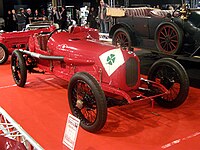 The list below includes all car manufacturers who have attained a podium. The table does not include the results of the 1957 edition, which was held as a regularity race.