The Tesla Factory is an automobile manufacturing plant in Fremont, California, operated by Tesla, Inc. The facility opened as the General Motors Fremont Assembly in 1962, and was later operated by NUMMI, a former GM–Toyota joint venture.[1] Tesla took ownership in 2010.[2] The plant currently manufactures the Model S, Model X, and Model 3, employing 10,000 people as of June 2018.[3]

Tesla had planned for an assembly factory in Albuquerque, New Mexico, as a central location for shipping.[4][5] Construction was supposed to begin in April 2007, but was canceled.[6] A separate greenfield factory to be built in San Jose, California was also announced.[7] However, the cost was prohibitive, and the company looked for alternatives. Tesla initially also dismissed NUMMI for being too big and costly.[8]

Some of the current facilities were operated as the GM Fremont Assembly from 1962 to 1982, and between 1984 and 2009 was used by New United Motor Manufacturing, Inc. (NUMMI),[9] a joint venture between General Motors and Toyota,[1][10]. NUMMI yearly production peaked at 428,633 vehicles in 2006.[11] Proposals to continue the site after 2010 included Aurica EVs, state incentives to Toyota, and a stadium, but none of them succeeded. In 2010 the mayor of Fremont viewed the site as dead.[12]

The plant is located in the South Fremont District next to the Mud Slough between the Warm Springs BART station[13] and the California State Route 262 connecting I880 and I680. Union Pacific Railroad has tracks at the plant[14][15] which carry finished cars.[16] Rail freight transport is also used to receive batteries and Model 3 drivetrains from Tesla's Gigafactory 1.[17]

On May 20, 2010, Tesla Inc. and Toyota announced a partnership to work on electric vehicle development and collaborate on the "development of electric vehicles, parts, and production system and engineering support". This included Tesla's partial purchase of the former NUMMI site, mainly consisting of the factory building,[18][19] for $42 million.[20][21]

Tesla officially took possession of the site on October 19, 2010,[12] and opened it on October 27.[2] The state of California has supported the renewal, expecting tax income from sustained jobs.[22][23][24] The first retail delivery of the Tesla Model S took place during a special event at the Tesla Factory on June 22, 2012.[25]

NUMMI auctioned off[26] the press lines, robots and other equipment to Toyota's other US factories,[27][28] and Tesla purchased over $17 million of manufacturing equipment and spare parts in 2011, at significant discounts compared to new equipment.[29] Additionally, Tesla bought a Schuler SMG hydraulic stamping press, worth $50 million, for $6 million, including shipping costs from Detroit.[30]

Various parts of the NUMMI plant were planned to be modified to support Tesla vehicle production. For example, the passenger vehicle paint equipment was to be extensively modified through late 2011;[12][needs update] converted from solvents to BASF water-based paint.[30] Two paint lines (one car body, one component) were constructed from 2015.[33][34][35] By 2014, half of the factory area was in use.[32]

The floors, walls and ceiling are painted white with skylights and high-efficiency lighting to create an environment similar to a laboratory,[36][37] and the production environment is cleaner and quieter than at NUMMI.[9]

In July 2013, Tesla acquired an adjacent 35-acre property from Union Pacific Railroad for a test track.[38][39]

In addition to Tesla employees, the company uses contractors for various functions. In May 2018, Elon Musk, in an apparent goal of reducing dead weight and raising efficiency and quality within its operation, decided to cut contractors and sub-contractors, ordering staff to justify and personally vouch for contractors worth keeping.[59][60] 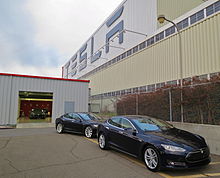 New Tesla Model S cars at the Tesla Factory in 2012

Deliveries reached 6,892 units in the last three months of 2013.[70] In December 2013, California announced it would give Tesla a US$34.7 million tax break to expand production by an estimated 35,000 vehicles annually from its Fremont, California plant.[71]

Production of the Model X joined the Model S during 2015,[77] following a short reconfiguration of the production line in July 2014.[78] The first Model X that didn't need corrections was made in April 2016.[79] Tesla moved some of the equipment to their Tilburg final assembly plant in the Netherlands in 2015.[80]

In May 2016 Tesla raised $1.46 billion in stock, of which $1.26 billion is to prepare production of the Model 3 scheduled for late 2017.[82][83] Changing from serially producing the Model S and X to the mass production of Model 3 is viewed by experts as a significant step.[84] Tesla stated in May 2016 that it does not have that capability and needs to acquire it,[85] which it partly did with the acquisition of Grohmann Automation in 2016[86] and purchase of mass production equipment. Whereas the Roadster was delayed by 9 months, the Model S more than six months, and the Model X more than 18 months,[87] analysts estimated in December 2016 that the Model 3 production preparation was on schedule for the second half of 2017.[88]

Tesla makes many parts itself, which is unusual in the auto business. Tesla also works with 300 suppliers around the world, of which 50 are in Northern California, and 10 in the San Francisco Bay Area.[91] Tesla's dashboard supplier SAS rents a 142,188-square-foot building near the factory, beginning in January 2017 with 200 employees.[92] Other suppliers to have opened facilities in the area to be close to Tesla include Eclipse Automation and Futuris Automotive Group.[93] Tesla produces many of its seats at its own seat factory a few miles south of the main factory.[94]

In 2020, Tesla implemented virus mitigation efforts in its Shanghai and Fremont factories. Shanghai resumed production on February 10th, while the Fremont and New York factories were to reduce activity by March 24.[95][96][97]

The manufacturing process uses more than 160 specialist robots, including 10 of the largest robots in the world,[98] which are named after X-Men characters.[99][100][101] Many of the Model S's unique components, including the battery pack, battery module, and drive units are manufactured in-house. The plant has a high level of integration compared with other modern car assembly plants, with most processes taking place within the Tesla Factory. This includes most of the stamping and machining, painting, and some coding. The hydraulic press lines used to stamp 5,000 body panels per day with a force of 10,000 tonnes,[102] are the largest in North America and the 6th largest in the world.[30] Around 60% of the car parts are sourced from North America,[103] while Japan is the second-biggest source of components as of March 2015.[104] Design engineers also work at the factory itself, rather than a separate facility.[10][105]

Each vehicle is made to order with a two to three-month wait time for delivery,[106] although individual vehicles only take between three and five days to complete the assembly process.[98] The assembly line moves at a speed of 5 cm/s.[107] Tesla prefers delivery by train rather than by truck, as costs and damages are less.[16] 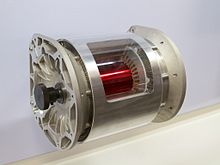 A complete Tesla Model S alternating current electric motor that has had a section removed from the stator to show the rotor inside.

The alternating current Induction motor is constructed in-house. The main components of the motor are the stator and rotor.[108]

The motor construction begins when a robot unspools and winds over 1⁄2 mile (0.80 km) of copper wire per motor. It then pulls the copper wire into a stack. The motor has three phases and so requires three coils of copper.[108] A worker then lengthens and straightens each bundle of wire and inserts a hydraulic lift to transfer the motor to the next station.

A worker insulates each bundle of copper wire in a plastic sleeve to prevent the bundles from touching one another. The ends of the bundles are then snipped to the correct length. Lugs are added and crimped to form attachment points for the motor's three phases.[108] A specialized automatic sewing machine then binds the coils together to keep them in place, the increased tightness of the binding provided by a robotic sewing machine increases the efficiency of the motor. The stator is then encased in a two part epoxy resin to help in evenly distributing the motor's heat. The stator is now complete and is inserted into a heated metal case, locking the stator inside as the case cools.[108]

A worker uses a hoisting system to insert the rotor inside the stator completing the construction of the motor.

A worker then installs the differential and other sections of the gearbox, attaching it together using bolts. An air leak test is then conducted. The three phase tripole power inverter is then installed onto the top of the motor to convert direct current from the battery into alternating current for the motor to use. The motor then undergoes a series of automated tests taking 4 minutes to ensure correct function, and then is moved to the general assembly area to be installed into the car.[108] 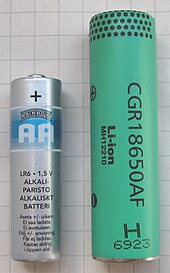 The use of commodity cells, similar to those found in laptops and mobile phones, is in contrast to every other electric vehicle manufacturer who use specialized large format Li-Ion cells.[119] The liquid-cooled battery pack uses an intumescent gel to aid in fireproofing and even heat distribution.[citation needed]

98% of the Tesla Model S body is constructed from aluminium[108] and is produced from between 50 and 60 separate coils of aluminium each for various components. The coils are unwound, flattened and cut in a blanking machine; additional cutting is also done using laser cutter. The total weight of the aluminium used in the Model S is around 410 pounds (190 kg).[98]

Stacked side panels that have been formed on the tandem press line.

A robot then transfers the aluminium blanks into the tandem press lines where the sheets are stamped into the various panels of the cars. The Schuler SMG hydraulic stamping press line is the largest in North America and the 6th largest in the world.[30] The presses use up to 11,000 ton-force to form the body panels; the upper section applies 1400 tonnes of downward force and the lower section 130 tonnes.[108] The blank aluminium sheet is stretched over the lower draw die and openings are cut with robots transferring the panels between processes. The workers then inspect each panel to ensure correct pressing. The parts are then stacked in frames and stored. The machines press one part every 6 seconds and create 5,000 parts per day.[98]

The car is raised and the drive unit is installed into the rear axle assembly. The drive unit provides power directly to the wheels without a drive shaft.[108]

The battery pack weighs almost 1,200 pounds (540 kg) and is delivered to the installation area and is raised into the car using a lift. Placing the battery pack under the cabin floor adds strength and rigidity to the car and lowers the vehicle's center of gravity[108] to 18 inches (46 cm).[120][121] A titanium plate is installed over the battery pack which protects it in the event of a high-speed collision and to protect from road debris.[122][123]

On April 1, 2019, Tesla reached a settlement with the United States Environmental Protection Agency (EPA) over its mishandling of hazardous waste in 2017. Tesla allowed hazardous waste to accumulate on site without a permit beyond the allowed 90 days; the EPA found Tesla failed to "promptly clean up flammable paint and or solvent mixtures", left two 55-US-gallon (210 L) containers of hazardous waste open with "no gasket or locking mechanism", and violated air emission standards for three leaky transmission lines that the waste moved through.[124]

In November 2013 there was an accident when the low-pressure aluminum casting press failed, spilling molten metal on three workers and causing their clothing to catch fire. Tesla was fined US$89,000 by the California Division of Occupational Safety and Health for seven safety violations, six considered serious.[125]