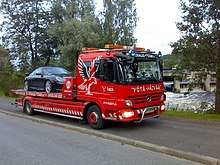 A tow truck (also called a wrecker, a breakdown truck, recovery vehicle or a breakdown lorry) is a truck used to move disabled, improperly parked, impounded, or otherwise indisposed motor vehicles. This may involve recovering a vehicle damaged in an accident, returning one to a drivable surface in a mishap or inclement weather, or towing or transporting one via flatbed to a repair shop or other location.

A tow truck is distinct from a car carrier trailer, which is used to move multiple new or used vehicles simultaneously in routine transport operations. 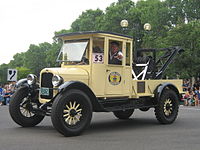 Ferdinand Porsche of Austro-Daimler developed an artillery tractor for the Austro-Hungarian army in 1908, the M 08. One of the batch was constructed as a recovery vehicle for the others, with a large winch on the rear platform.[1]

The wrecker (with lifting jib) was invented in 1916 by Ernest Holmes Sr. of Chattanooga, Tennessee, a garage worker who was inspired after he needed blocks, ropes, and six men to pull a car out of a creek. After improving his design he began manufacturing them commercially.[2] The International Towing and Recovery Hall of Fame and Museum in his home town displays restored antique wreckers, tools, equipment, and pictorial histories of motor-vehicle towing, a type of work that Holmes originated.

Five general types of tow truck are in common usage, usually based on the type or size of vehicle to be towed: 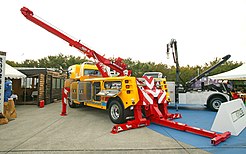 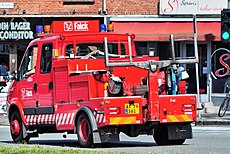 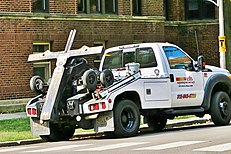 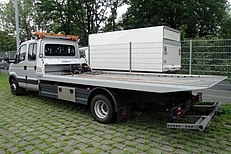 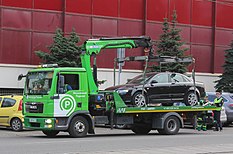 There are also several sizes and weight categories of tow truck. The lightest models are usually based on light truck and van chassis offering boom and tow weights of around 5 to 10 short tons (4.5–9.1 metric tons), making them ideal for car towing. Medium-duty tow trucks have a boom capacity of 15 to 20 short tons (14–18 metric tons). Heavy-duty tow trucks, based on chassis used by semi-trucks, with multiple axles and the ability to tow fully-loaded semi-truck and trailer combinations, have a boom capacity from 25 to 50 short tons (23–45 metric tons). Rotators are the heaviest type of tow truck, ranging from 40 to 75 short tons (36–68 metric tons) (though lighter models do exist) and often come with many other features per customer specification.[12][further explanation needed]

Most flatbed-type vehicles are based on medium-duty and heavy-duty trucks to provide the chassis strength necessary to carry entire vehicles. 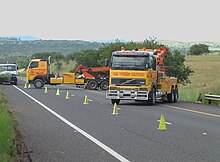 Heavy trucks working on a recovery 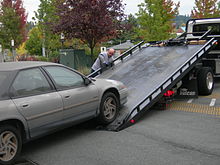 An improperly-parked car being recovered.

Tow trucks are usually operated by private businesses, except for major highways and toll roads, where the road authority may operate the tow trucks for that stretch of road. Some police departments own tow trucks; in the US, however, it is common to contract police tows to private companies. Businesses who operate a large fleet of vehicles, such as school bus companies or package delivery services, often own one or several tow trucks for the purposes of towing their own vehicles. Government departments with large fleets (such as the police departments, fire departments, transportation authorities and departments of public works of major cities) may similarly own one or more tow trucks. Police department tow trucks may also be used to impound other vehicles. Heavy tow trucks are often called to clear semi-truck accidents and straighten out jackknifed trucks. In rural or unorganized areas, companies which operate tow trucks can sometimes also offer additional services appropriate to highway clearance where government-provided ones are unavailable, such as fire suppression.

The military also deploys tow trucks for recovery of stranded vehicles. In the US Army, a variant of the HEMTT truck is used for this purpose, the M984 wrecker.[13] For recovery in combat situations while under fire, many armies with large vehicle fleets also deploy armoured recovery vehicles. These vehicles fulfill a similar role, but are resistant to heavy fire and capable of traversing rough terrain with their tracks, as well as towing vehicles beyond the weight limits of wheeled wreckers, such as tanks (many are based on tank designs for this reason).[14]

Each state and territory of Australia has its own regulations and acts for the operation of tow trucks. Tow trucks are generally divided into two categories, either by standard, trade and private towing or accident towing. Accident towing tow trucks are clearly identifiable by number plates ending in either "ATT" or "TT". Tow trucks that are not endorsed for accident towing may use general number plates of any combination pursuant to each state's own registering system. An example of a statute regulating the operation of tow trucks and towing companies in Victoria is the Victorian Accident Towing Services Act.[15]