There are four types of marketable treasury securities: Treasury bills, Treasury notes, Treasury bonds, and Treasury Inflation Protected Securities (TIPS). The government sells these securities in auctions conducted by the Federal Reserve Bank of New York, after which they can be traded in secondary markets. Non-marketable securities include savings bonds, issued to the public and transferable only as gifts; the State and Local Government Series (SLGS), purchaseable only with the proceeds of state and municipal bond sales; and the Government Account Series, purchased by units of the federal government.

Treasury securities are backed by the full faith and credit of the United States, meaning that the government promises to raise money by any legally available means to repay them. Although the United States is a sovereign power and may default without recourse, its strong record of repayment has given Treasury securities a reputation as one of the world's lowest-risk investments.

To finance the costs of World War I, the U.S. Government increased income taxes (see the War Revenue Act of 1917) and issued government debt, called war bonds. Traditionally, the government borrowed from other countries, but there were no other countries from which to borrow in 1917.[1]

The Treasury raised funding throughout the war by selling $21.5 billion in 'Liberty bonds.' These bonds were sold at subscription where officials created coupon price and then sold it at par value. At this price, subscriptions could be filled in as little as one day, but usually remained open for several weeks, depending on demand for the bond.[1]

After the war, the Liberty bonds were reaching maturity, but the Treasury was unable to pay each down fully with only limited budget surpluses. To solve this problem, the Treasury refinanced the debt with variable short and medium-term maturities. Again the Treasury issued debt through fixed-price subscription, where both the coupon and the price of the debt were dictated by the Treasury.[1]

The problems with debt issuance became apparent in the late 1920s. The system suffered from chronic over-subscription, where interest rates were so attractive that there were more purchasers of debt than required by the government. This indicated that the government was paying too much for debt. As government debt was undervalued, debt purchasers could buy from the government and immediately sell to another market participant at a higher price.[1]

In 1929, the US Treasury shifted from the fixed-price subscription system to a system of auctioning where 'Treasury Bills' would be sold to the highest bidder. Securities were then issued on a pro rata system where securities would be allocated to the highest bidder until their demand was full. If more treasuries were supplied by the government, they would then be allocated to the next highest bidder. This system allowed the market, rather than the government, to set the price. On December 10, 1929, the Treasury issued its first auction. The result was the issuing of $224 million three-month bills. The highest bid was at 99.310 with the lowest bid accepted at 99.152.[1]

The types and procedures for marketable security issues are described in the Treasury's Uniform Offering Circular (31 CFR 356). 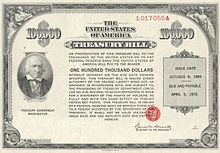 1969 $100,000 Treasury Bill
Note that the Bank of England issues securities by this name in the United Kingdom.

Treasury bills (T-bills) are zero-coupon bonds that mature in one year or less. They are bought at a discount of the par value and, instead of paying a coupon interest, are eventually redeemed at that par value to create a positive yield to maturity.[2]

During periods when Treasury cash balances are particularly low, the Treasury may sell cash management bills (CMBs). These are sold through a discount auction process like regular bills, but are irregular in the amount offered, the timing, and the maturity term. CMBs are referred to as "on-cycle" when they mature on the same day as a regular bill issue, and "off-cycle" otherwise.[3] Before the introduction of the four-week bill in 2001, the Treasury sold CMBs routinely to ensure short-term cash availability.[4] CMB offerings then all but disappeared aside from occasional auction system tests[5] until the COVID-19 pandemic, when the Treasury used them extensively to reinforce its cash position amid fiscal uncertainty.[6]

Treasury bills are quoted for purchase and sale in the secondary market on an annualized discount percentage, or basis. General calculation for the discount yield for Treasury bills is:[7]

This is the modern usage of Treasury note in the U.S.; for the earlier meanings, see Treasury Note (disambiguation). 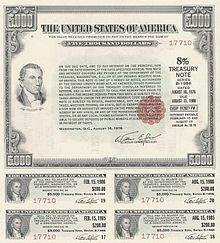 Treasury notes (T-notes) have maturities of 2, 3, 5, 7, or 10 years, have a coupon payment every six months, and are sold in increments of $100. T-note prices are quoted on the secondary market as a percentage of the par value in thirty-seconds of a dollar. Ordinary Treasury notes pay a fixed interest rate that is set at auction. Another type of note, known as the floating rate note, pays interest at a rate that adjusts quarterly based on bill rates.

The 10-year Treasury note has become the security most frequently quoted when discussing the performance of the U.S. government bond market and is used to convey the market's take on longer-term macroeconomic expectations. 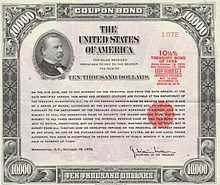 Treasury bonds (T-bonds, also called a long bond) have the longest maturity at thirty years. They have a coupon payment every six months like T-notes.[8]

The U.S. Federal government suspended issuing 30-year Treasury bonds for four years from February 18, 2002 to February 9, 2006.[9] As the U.S. government used budget surpluses to pay down Federal debt in the late 1990s,[10] the 10-year Treasury note began to replace the 30-year Treasury bond as the general, most-followed metric of the U.S. bond market. However, because of demand from pension funds and large, long-term institutional investors, along with a need to diversify the Treasury's liabilities—and also because the flatter yield curve meant that the opportunity cost of selling long-dated debt had dropped—the 30-year Treasury bond was re-introduced in February 2006 and is now issued quarterly.[11] In 2019, Treasury Secretary Steven Mnuchin said that the Trump administration was considering issuance of 50-year and even 100-year Treasury bonds.[12]

The secondary market for securities included T-notes, T-bonds, and TIPS whose interest and principal portions of the security have been separated, or "stripped", in order to sell them separately. The practice derives from the days before computerization, when treasury securities were issued as paper bearer bonds; traders would literally separate the interest coupons from paper securities for separate resale, while the principal would be resold as a zero-coupon bond.

The modern versions are known as Separate Trading of Registered Interest and Principal Securities (STRIPS). The Treasury does not directly issue STRIPS – they are products of investment banks or brokerage firms – but it does register STRIPS in its book-entry system. STRIPS must be purchased through a broker, and cannot be purchased from TreasuryDirect.

Savings bonds were created in 1935, and, in the form of Series E bonds, also known as war bonds, were widely sold to finance World War II. Unlike Treasury Bonds, they are not marketable, being redeemable only by the original purchaser (or beneficiary in case of death). They remained popular after the end of WWII, often used for personal savings and given as gifts. In 2002, the Treasury Department started changing the savings bond program by lowering interest rates and closing its marketing offices.[16] As of January 1, 2012, financial institutions no longer sell paper savings bonds.[17]

Savings bonds are currently offered in two forms, Series EE and Series I bonds. Series EE bonds pay a fixed rate but are guaranteed to pay at least double the purchase price when they reach initial maturity at 20 years; if the compounded interest has not resulted in a doubling of the initial purchase amount, the Treasury makes a one-time adjustment at 20 years to make up the difference. They continue to pay interest until 30 years.[18][19]

Series I bonds have a variable interest rate that consists of two components. The first is a fixed rate which will remain constant over the life of the bond; the second component is a variable rate reset every six months from the time the bond is purchased based on the current inflation rate as measured by the Consumer Price Index for urban consumers (CPI-U) from a six-month period ending one month prior to the reset time.[18] New rates are published on May 1 and November 1 of every year.[20] During times of deflation the negative inflation rate can wipe out the return of the fixed portion, but the combined rate cannot go below 0% and the bond will not lose value.[20] Series I bonds are the only ones offered as paper bonds since 2011, and those may only be purchased by using a portion of a federal income tax refund.[21]

The "Certificate of Indebtedness" (C of I) is issued only through the TreasuryDirect system. It is an automatically renewed security with one-day maturity that can be purchased in any amount up to $1000, and does not earn interest. An investor can use Certificates of Indebtedness to save funds in a TreasuryDirect account for the purchase of an interest-bearing security.[22]

The Government Account Series is the principal form of intragovernmental debt holdings.[23] The government issues GAS securities to federal departments and federally-established entities like the Federal Deposit Insurance Corporation that have excess cash.

The State and Local Government Series (SLGS) is issued to government entities below the federal level which have excess cash that was obtained through the sale of tax-exempt bonds. The federal tax code generally forbids investment of this cash in securities that offer a higher yield than the original bond, but SLGS securities are exempt from this restriction. The Treasury issues SLGS securities at its discretion and has suspended sales on several occasions to adhere to the federal debt ceiling.

In September 2019 approximately $5.9 trillion of outstanding Treasury securities, representing 26% of the public debt, were held by agencies of the federal government itself. These intragovernmental securities function as time deposits of the agencies' excess and reserve funds to the Treasury. The Federal Reserve Bank of New York was also a significant holder as the market agent of the Federal Reserve system, with $2.7 trillion or roughly 11%. Other domestic holders included mutual funds ($2.2 trillion), state and local governments ($1.1 trillion), banks ($910 billion), private pension funds ($728 billion), insurers ($208 billion) and assorted private entities and individuals ($2.8 trillion, including $152 billion in Savings Bonds).[24]