Trelleborg AB is a global engineering group focused on polymer technology, with headquarters in Trelleborg, Sweden, with approximately 24,000 employees (2018), and with yearly revenue of 34 billion SEK. Its stock has been publicly listed on stock exchanges since 1964, and currently (2019) is listed on the Nasdaq Stockholm, large cap. It has operations in about 50 countries and describes its mission as the development of "engineered polymer solutions that seal, damp and protect critical applications in demanding environments".[4]

The company was founded in 1905 as "Trelleborgs Gummifabriks AB" (the Rubber Factory Corporation of Trelleborg) by Henry Dunker and Johan Kock, who were both already active in the rubber industry. Initially, the company had 150 employees and produced bicycle tires and rubber for industrial applications. During World War I, the Swedish Armed Forces placed substantial orders.

By the mid 1930s, the number of employees had reached 1,000. Beginning in the 1950s, the share of revenue from sales outside of Sweden increased; in 1950, it was 4%, and in 1970, it was 40%. In 1964, Trelleborgs Gummifabriks AB was floated at the Stockholm Stock Exchange. The current name was adopted in 1977. Between 1983 and 1991, the strategy was to act as a wide-ranging industrial conglomerate, with a particular focus on mining and metals. Later, the company's focus returned to rubber products. In 1999, the scope was further narrowed by specializing in industrial applications. In 2003, polymer-based precision seals were added to the product offerings. In 2009 the European Commission fined several marine hose producers, among them Trelleborg AB, "...for participating in a cartel for marine hoses between 1986 and 2007 in violation of the ban on cartels and restrictive business practices in the EC Treaty (Article 81) and the EEA Agreement (Article 53)." [2] In mid 2012, Trelleborg and Freudenberg formed a 50/50 joint venture in antivibration solutions for light and heavy vehicles, TrelleborgVibracoustic. In summer 2016, Trelleborg divested all of its shares to Freudenberg and that concluded the Automotive antivibration journey.[3] 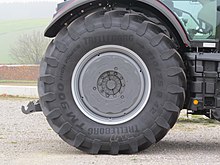 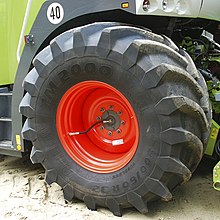 Trelleborg tire TM 2000 on a forage harvester (fitted with CTIS)

Trelleborg AB is divided into the following business areas:[4]

Trelleborg AB was in 2011, according to , the third largest player in the world market for non-tire rubber products.[5]

The net sales for 2018 had the following geographical distribution:[6]

Since April 26, 2018, Hans Biörck has been Chairman of Trelleborg AB. The following table lists the chairmen in chronological order since the company was founded.

Since October 1, 2005, Peter Nilsson has been president and CEO of Trelleborg AB. The following table lists the presidents and CEOs in chronological order since the company was founded.