Not to be confused with the "Twentieth Century Motor Company", a fictional corporation in "Atlas Shrugged". 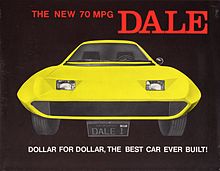 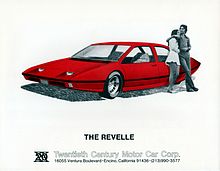 1975 advertisement for the Revelle concept model

The Twentieth Century Motor Car Corporation was an automobile company started by con artist Geraldine Elizabeth "Liz" Carmichael,[1] in 1974, incorporated in Nevada.[2][3] The company's flagship vehicle was the Dale, a prototype three-wheeled two-seater automobile designed and built by Dale Clifft. It was touted as being powered by an 850 cc air-cooled engine and featuring 70 mpg‑US (3.4 L/100 km; 84 mpg‑imp) fuel economy and a $2,000 (in 1974 US dollars) price, which were popular specifications during the mid 1970s US fuel crisis.[4]

Liz Carmichael, a trans woman, appeared to be of an imposing size—estimated to be at least 6 ft (1.8 m)[2] tall and 175 to 225 lb (79 to 102 kg).[5] She claimed to be the widow of a NASA structural engineer; a farmer's daughter from Indiana; and a mother of five.[6] In reality, she had been wanted by the police since 1961 for alleged involvement in a counterfeiting operation. She had changed her name and identity from Jerry Dean Michael (born c. 1917).[3][7] She often introduced Vivian Barrett Michael—the mother of their five children—as her secretary.[8] The company would ultimately prove to be fraudulent when Carmichael went into hiding with investors' money.[9]

Before meeting Carmichael, Clifft hand-built a car made of electrical conduit and covered in naugahyde.[10] The Dale prototype was designed and built by Clifft, and the project was subsequently marketed by Carmichael. Much of the interest in the Dale was a result of the 1973 oil crisis: higher economy automobiles like the Dale were viewed as a solution to the oil crunch.[6] Speaking to the Chicago Sun-Times in November 1974, Carmichael said she was on the way to taking on General Motors or any other car manufacturer for that matter.[6] She said she had millions of dollars in backing "from private parties" and also talked of a 150,000 sq ft (14,000 m2) assembly plant in Burbank, California and over 100 employees on the rolls.[6]

The Dale was also marketed as being high-tech, lightweight, yet safer than any existing car at the time.[4] "By eliminating a wheel in the rear, we saved 300 pounds and knocked more than $300 from the car's price. The Dale is 190 inches long, 51 inches high and weighs less than 1,000 pounds," said Carmichael. She maintained that the car's lightness did not affect its stability or safety. The low center of gravity always remained inside the triangle of the three wheels, making it nearly impossible for it to tip over.[6] She also went on record to say that she drove it into a wall at 30 mph (48 km/h) and there was no structural damage to the car (or her). She said the Dale was powered by a thoroughly revamped BMW two-cylinder motorcycle engine, which generated 40 hp (30 kW) and would allow the car to reach 85 mph (137 km/h). She expected sales of 88,000 cars in the first year and 250,000 in the second year.[6] The vehicle's wheelbase was 114 in (2.90 m).[3]

A non-running model of the Dale was displayed at the 1975 Los Angeles Auto Show.[7] The car was also shown on the television game show The Price Is Right.[7]

Two additional vehicles were proposed by Carmichael to complement the Dale: the Revelle and the Vanagen, a station wagon.[3] Both of these featured a three-wheeled design and used the same 2-cylinder engine. None of the vehicles were produced, and only three prototype vehicles of the Dale were made. Only one prototype was able to move under its own power.

The company had already encountered legal troubles when California's Corporations Department ordered it to stop offering stock for public sale because it had no permit.[2]

Rumors of fraud began to emerge, followed by investigations by a TV reporter and some newspapers[3] as well as the began an investigation.[11] Although Clifft said he still believed in the project and said that he was promised $3 million in royalties once the Dale went into production, he only received $1,001, plus a $2,000 check, which bounced.[3] Carmichael went into hiding and was featured in an episode of Unsolved Mysteries, which detailed the fraud behind the Dale as well as the fact Carmichael was wanted.[5] She was eventually found working in Dale, Texas, under the alias Katherine Elizabeth Johnson,[7] at a flower shop. She was arrested, extradited to California,[3] tried and sent to prison for ten years.[7][12]

Carmichael eventually died of cancer in 2004.[12] Clifft, never shown to have been involved in the fraud, later formed The Dale Development Co., and developed and received several patents;[10] he died in 1981.