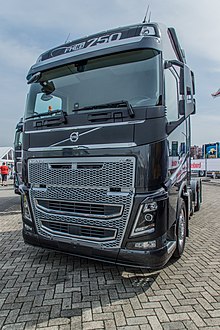 A 2013 model Volvo FH16. The Volvo FH series was introduced in 1993 and is Volvo Trucks' most commercially successful truck.

Volvo Trucks Corporation (Swedish: Volvo Lastvagnar), stylized as VOLVO, is a global truck manufacturer based in Gothenburg, Sweden, owned by AB Volvo. In 2016, it was the world’s second largest manufacturer of heavy-duty trucks.[1]

Volvo Group was reorganised on 1 January 2012[2] and as a part of the process, Volvo Trucks ceased to be a separate company and was instead incorporated into Volvo Group Trucks, with Volvo’s other truck brands, Renault Trucks, Mack Trucks and UD Trucks.

The first Volvo truck rolled off the production lines in 1928, and in 2016 Volvo Trucks employed more than 52,000 people around the world. With global headquarters in Gothenburg, Sweden, Volvo manufactures and assembles its trucks in eight wholly owned assembly plants and nine factories owned by local interests.[3] Volvo Trucks produces and sells over 190,000 units annually.[1] 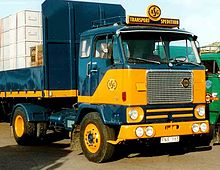 When Volvo manufactured its first automobiles in 1927, the first truck was already on the drawing table. In early 1928, the LV series 1 was presented to the public. Though by modern standards it was merely a truck, it was an immediate success and 500 units were sold before the summer. It had a 2.0 L 4-cylinder engine rated at 28 hp (21 kW).[5]

Volvo cabs are manufactured in the north of Sweden in Umeå and in Ghent, Belgium, while the engines are made in the central town of Skövde. Among some smaller facilities, Volvo has assembly plants in Sweden (Gothenburg - also the Head Office), Belgium, USA, Brazil, South Africa, Australia, China, India and Russia. Some of the smaller factories are jointly owned. Its main parts distribution centre is located in Ghent, Belgium. The sales side, with their corresponding offices and dealers, is split into seven sales areas – Latin America, North America, Europe North, Europe South, Africa/Middle East, and Asia/Oceania.[6]

Plants where Volvo trucks are manufactured:[7]

1995 Volvo WG, the first year that this old White GMC truck was marketed as a Volvo

In 1981, AB Volvo acquired the assets of White Trucks, forming Volvo White Truck Corporation in Greensboro, North Carolina.[8] As part of the acquisition, Volvo acquired the White, Autocar, and the dormant Sterling brands; the Canadian Western Star truck brand was spun off into an independent company. Alongside the truck assets of White, Volvo acquired a nationwide distribution network (as White had served as the distributor of Freightliner until 1977). Prior to the acquisition, White's products included the White Road Boss conventional, the White Road Commander 2 (COE), the Road Xpeditor 2 (low-COE), the Autocar A-series (tractors with extensive use of aluminium), Autocar DC-series (heavy-duty/severe service), the Autocar Construcktor 2 (heavy-duty/severe-service with a White cab), and Western Star conventional/COE trucks. White also operated plants in Utah, Ohio, and Virginia.

Following the 1981 acquisition, Volvo upgraded the designs of White and Autocar product lines. In 1982, the White Integral Sleeper was introduced, joining the sleeper and passenger cab seamlessly. In 1983, the Road Boss was replaced by the White Conventional; while retaining the same cab, the hoodline was lowered with a redesigned grille. In 1985, the Integral Tall Sleeper was developed (the "Globetrotter" sleeper of America) as a raised-roof variant of the Integral Sleeper. In 1987, the White 'Aero' truck was introduced, adopting a lowered hoodline, composite headlamps (shared with the Volvo 240), and a flush-mounted grille. In 1988, the WG was introduced, marking the return of a short-hood conventional. The Autocar DK severe-duty line was launched in 1983 and supplemented by the widely admired Autocar AT64F long-haul tractor. In 1988, the DK was replaced by the Autocar ACL and ACM models. While the AC-series trucks were tough and reliable, they incorporated a number of Volvo components and, for some Autocar loyalists, marked a dilution of the Autocar brand.

In 1986, Volvo commenced sales of trucks under its own brand in North America, introducing the FE-series low-cab COEs. While Western Star was spun off in 1981, its cabover model line continued to be produced by White and rebadged as a Western Star.[9]

On August 16, 1986, General Motors announced the formation of a joint venture with AB Volvo, with the latter holding an 85% stake.[10] Named Volvo GM Heavy Truck Corporation, Volvo would take responsibility for development, design, and production of heavy trucks of the joint venture, named WhiteGMC.[10] All General Motors heavy product lines were discontinued (with the exception of the GMC Brigadier, ending production as a WhiteGMC in 1988); the joint venture rebadged the White product line as WhiteGMCs while Autocars remained in production. In 1995, Volvo GM ended the use of the WhiteGMC name, with all non-Autocar models adopting the Volvo name. In 1997, Volvo AB purchased the rest of its stake in Volvo GM, renaming it Volvo Trucks North America.[8]

In 1996, Volvo released the Volvo VN-series, the first Volvo truck developed outside of White or General Motors. Designed specifically for North America, the VN was more aerodynamic than its WIA predecessor. The previous-generation WG remained in production, with Autocar dropped as a separate brand name, becoming a sub-model of Volvo severe-service trucks.

On April 25, 2000, AB Volvo acquired Renault Véhicules Industriels through a merger, making it the owner of Mack Trucks.[11] Following the merger, Volvo became the largest European truck manufacturer and the second-largest truck manufacturer in the world. To secure approval of the merger (by avoiding potential antitrust issues), Volvo agreed to divest its low-cabover range (known as the Xpeditor[12]); alongside the Mack MR/LE, the two vehicles held a predominant share of the refuse market. In 2007, Volvo re-entered the segment through its purchase of UD Nissan Diesel.[13][14] Alongside the Xpeditor product range, the Autocar trademark was sold in 2001 to Grand Vehicle Works LLC,[15] a Chicago-based private holding company that owned body manufacturer (founded in 1898) and .[16] Shortly before Autocar was acquired by GVW Group, Autocar conventionals were retired.

In 2000, Volvo introduced the VHD severe-service conventional, largely as a replacement for Autocar conventional vehicles. While using the cab of the VN, the VHD used a heavier-duty chassis and suspension, along with sealed-beam headlamps. In 2002, the second-generation VN, the VNL, was introduced.

In 2009, Volvo began to relocate the operations of its Mack Trucks subsidiary to Greensboro, where the North American operations of Volvo Trucks have been headquartered.[17] Today, Volvo produces Class 8 Volvo trucks at its Dublin, Virginia plant and Class 8 Mack truck models in Macungie, Pennsylvania. Affiliate Volvo Powertrain produces engines and transmissions at its Hagerstown, Maryland, facility, for use exclusively in the North American market.

Volvo Trucks are exported to and sold by more than 1800 dealers in more than 75 countries.[1]

Volvo tried to settle in Argentina on two different occasions: the first, in 1959 [18] would be carried out in partnership with the local company Conarg. The truck production was a failure, but some models of motor graders with Volvo engine was made by Conarg (under licence of Bolinder Munktell).[19] The second, in 1972, Volvo Sudamericana SACI has elevated to the consideration of the highest authority of the Ministry of Industry and Mining its project of installation of an industrial complex, consisting of an automotive terminal plant for chassis of heavy trucks with cab and chassis for long distance buses; a plant for trailers and a third plant for coaches.[20] In conclusion, Volvo loses the tender, which was in the hands of Scania.

Volvo is currently focusing on such alternative fuels such as HVO, (Bio-)DME, LNG and methane.[21]

As a part of adapting to the new European Union Euro 6 engine environment requirements, Volvo Trucks renewed their truck range in 2012 and 2013. The biggest launch was the new Volvo FH in September 2012[22] The rest of the range were renewed in the spring of 2013. 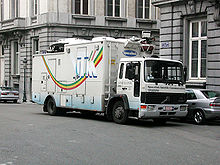