Wilkinson Sword is a brand for razors and other personal care products sold in Europe, owned by Edgewell Personal Care. The company was founded as a manufacturer of guns made in Shotley Bridge in County Durham, by Henry Nock in London in 1772.

Besides guns, the company has also produced swords, bayonets and products such as typewriters, garden shears, scissors and motorcycles.[1] Gardening equipment is still made under the Wilkinson Sword name by E.P. Barrus under a licensing arrangement.[2] Wilkinson Sword has manufactured its products in three UK locations over the years: in London (Chelsea and Acton), Cramlington in Northumberland, and Bridgend in Wales, where it made gardening tools. In 2000, the company closed its razor plant in the UK and consolidated production in Germany. In 2014, the company further moved most of its production to Czech Republic. 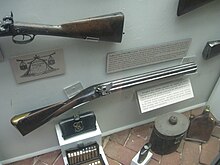 Henry Nock began trading as a gunlock smith out of Mount Pleasant in London in 1772. In 1775, he formed Nock, Jover & Co. with William Jover and John Green.[3] The American Revolutionary War led to strong sales for the new company. In 1776, the Board of Ordnance granted Nock, Jover & Co. an advance of £200 to start producing bayonets and in 1779 the company won a contract to produce 500 seven-barreled volley guns for the Royal Navy.[3] Although designed by James Wilson, these would become known as Nock volley guns or Nock guns.[3] 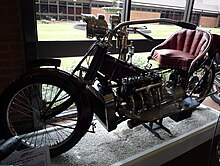 Wilkinson Sword produced some of the earliest motorcycles in 1903. These were two-cylinder machines with Belgian engines made by Antoine, which were marketed by a garage in Chelsea, London – one of the first motorcycle dealerships in the UK. The venture was not a success however.[4] In 1911, Wilkinson developed and manufactured the Wilkinson TMC, a luxury touring motorcycle between 1911 and 1916, when production was stopped by World War I.[5] The first 'Wilkinsons' were designed for military reconnaissance by P G Tacchi, who was granted a patent for the design in 1908.[citation needed] Demonstrated to the British military in the summer of 1908, the Wilkinson motorcycle failed to impress the authorities, despite optional accessories including a sidecar complete with Maxim machine gun – and a steering wheel instead of handlebars.[6] Undaunted, the company continued development and exhibited a new version a year later at the Stanley Clyde Motorcycle Show at the Agricultural Hall, Islington, London in 1909.[7] Only about 250 Wilkinsons were produced before World War I. Restrictions brought the line to its end in spring 1916, and Wilkinson had to produce thousands of bayonets for the war effort. After the war, they decided to continue to develop the in-line four engine – but in a new car called the Deemster, and they never resumed motorcycle production.[5]

In 1962, Wilkinson Sword introduced stainless steel razor blades and soon the company's blades made rapid gains in shares of the market, because one blade, though somewhat more expensive, could be used for a week. The earlier carbon steel razor blades rusted quickly enough that many people used a new blade each day. So, although Wilkinson gained a larger percentage of the market, the demand for razor blades declined to approximately 14 percent of its previous level. This introduction gave Wilkinson a substantive market share and previous market leaders quickly responded by introducing their own stainless blades. The technology had been available for some time, but the market leaders such as Gillette, which held a patent on stainless blades, presumably knew that any gain for them in market share would be overwhelmed by the dramatic reduction in the size of the market.[9]

In 1973, Wilkinson Sword merged with the British Match Corporation to form Wilkinson Match.[1] This was intended to create a stronger company, with a larger advertising budget that would enable the company to fight its American rival in the consumer shaving market, the Gillette Company, and its British subsidiary, also called Gillette. In this advertising war, Wilkinson Sword loudly touted its long and proud tradition of bladesmithing in its print and electronic media advertisements. That same year Wilkinson purchased the American pen and lighter company Scripto, Inc. in an attempt to diversify its holdings.[1]

Allegheny Ludlum Industries of Pittsburgh purchased Wilkinson Match in 1978. After becoming Allegheny International, Inc., the company filed for bankruptcy reorganization in 1987. Allegheny sold Wilkinson Match in 1986 to Swedish Match, which merged with Stora Group two years later.[1] In 1989, Gillette helped finance a buyout of the Swedish Match consumer products division, which included Wilkinson Sword, by the Netherlands-based Eemland Holdings, giving Gillette a 22% stake in Eemland.[10] After Gillette was ordered by the European Community Commission in 1992 to sell its interest in Eemland, Eemland sold Wilkinson Sword to Warner-Lambert, owner of Schick razor brand forming Schick-Wilkinson Sword. The Schick name was used on its products in North America and Japan, and the Wilkinson Sword name in Europe.[1] In 2000, Pfizer acquired Warner-Lambert and three-years later, divested the Wilkinson component.

Most of the former Bryant and May operations of Wilkinson Match were closed or sold in the late 1970s and early 1980s, including the Bryant and May factories in Bow and Melbourne. The home and gardening tools division was sold to Fiskars in 1988.

Throughout the 20th century, Wilkinson Sword produced ceremonial swords for the Household Cavalry of the British Army, and crafted the ceremonial sword for the Golden Jubilee of Elizabeth II in 2002. The sword factory combined state of the art manufacturing technology with traditional skills and 19th century machinery to produce original fighting quality swords.

The production of swords came to an end when the company's sword factory at Acton closed in September 2005.[11] Wilkinson Sword then held an auction of the tools, equipment, sword drawings, and forging and milling machinery. Robert Pooley, who had commissioned the company to produce swords, bought many of these items and formed Pooley Sword to supply the Army in place of Wilkinson Sword.[12] Other sword manufacturers, and in particular WKC in Germany, also bought items, including the roll forge. Many of the tools and machines are still in use today and classic knives such as the Fairbairn-Sykes are produced by the company.

Wilkinson Sword-branded three-, four-, and five-bladed razors for men and women have been produced in Germany since 1998, when production moved from the UK.[14]