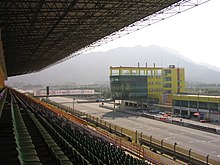 The circuit from the main grandstand. 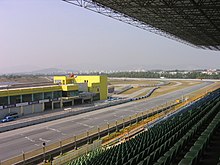 The final corner and the pit lane entrance.

Motorsport started in Zhuhai when it hosted a race on its street circuit in 1993. Racing continued there until 1996 when the motor racing circuit was constructed and became China's first permanent motor race track[1] with Formula One in mind.

The circuit was designed by Australian company Kinhill Engineers Pty Ltd, the same group which created the Formula One circuit in Adelaide. The project manager for the project was Michael McDonough.[2]

The first international race held at the circuit was the BPR Global GT Series. The circuit soon became the hotbed of local motorsports with teams from Hong Kong and Macau setting up their bases inside the circuit garages.

The original circuit contained 16 corners. But corners 7, 8 and 9 were eliminated and made into one corner, after a track change request from FIM.

The circuit is 4.3 kilometres (2.67 mi) long and has 14 turns. 9 of them are right turns and 5 are left turns and the circuit runs clockwise only. The shorter straight is 500 metres (0.31 mi) long. The longest straight is the start/finish straight which is 900 metres (0.56 mi) long and 14 metres wide at its widest.[1] Alexandre Imperatori, A1 Team Switzerland's rookie driver, suggested that there are many overtaking places in the circuit because of the combination of straights, hard braking areas for hairpins, tight corners, followed by and accelerating for long straights.[3] The most successful driver on the circuit is the best one who can manage their brake wear.[4] Zhuhai International Circuit is an FIA Grade II certified circuit.

The fastest qualifying lap ever at the circuit was set by a Lola-Zytek A1 Grand Prix car on the fourth round on December 16, 2007 during the 2007-08 A1 Grand Prix season. It was driven by Michael Ammermüller and managed a lap of 1:23.203. However, this is not considered the lap record since lap records are taken from racing laps and not qualifying. 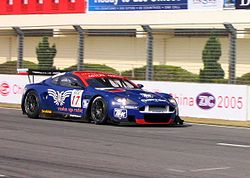 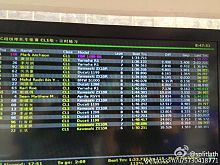 The fastest lap ever on a Motorcycle was set at a Pan Delta 1000cc Superbike race, taken by splitlath team. Winning all 6 races, Splitlath rider Mark Aitchison smashed the ZIC Superbike lap record 1:33.725 on an EBR RS 1190

The official race lap records at the Zhuhai International Circuit are listed as:

Zhuhai International Circuit Co Ltd is also a prominent motorsport event organizer and promoter in China. It has organized and promoted the FIA GT Championship in China and in 2007, it has also signed a contract with China Motorcycle Sports Association to promote the inaugural China Superbike Championship.

Zhuhai International Circuit is the promoter of the China Superbike Championship, established in 2007 and sanctioned by the China Motorcycle Sports Association, CMSA.

ZIC also organizes the Circuit Hero and Circuit Hero GT race series, which allows citizens of the People's Republic of China to participate. 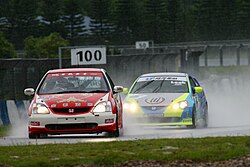 AFOS has been held at the circuit many times since its inception in 1994.

The Asian Formula Three Championship is also hosted by the circuit annually.

In addition, the race at ZIC in December is annual.

ZIC was included in the provisional 1999 F1 calendar, but the circuit subsequently lost its place in the calendar after failing to meet the international standards set by the FIA.[12][13] F1 subsequently raced in Shanghai International Circuit. 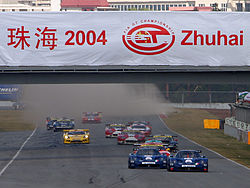 Maseratis leading the FIA GT Championship race at Zhuhai in 2004.

The FIA GT Championship race has been postponed to 25 March 2007 from October 2006, in order to keep clear of the Shanghai F1 Grand Prix in early October and the Macau Grand Prix in the middle of November. The race was won by All-Inkl.com racing's Lamborghini Murciélago R-GT, driven by Christophe Bouchut and Stefan Mucke. GT2 class was won by AF Corse's Ferrari F430 GT2, with Dirk Müller and Toni Vilander at the wheel. 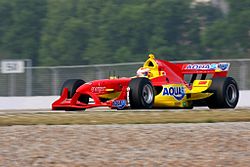 A1 Team China racing at Zhuhai International Circuit in the 2007 A1GP race at ZIC.

Zhuhai International Circuit staged the fourth round of the 2007-08 A1 Grand Prix season on December 16, 2007. The Sprint race was won by Michael Ammermüller of Team Germany and the Feature race was won by Narain Karthikeyan of Team India. On October 13, 2009, Executive Deputy General Manager of Zhuhai International Circuit, Stewart Tan, said he welcomed A1 Grand Prix's return to the circuit for November 15, 2009.[16] However, the series had more races cancelled, with an announcement made on 5 November 2009 stating that races in China and Malaysia were not taking part.[17] 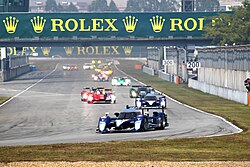 On 10 June 2010, the ACO announced that the Chinese round of the 2010 Le Mans Intercontinental Cup - The 1000 km of Zhuhai, will be held at Zhuhai International Circuit on 7 November.[18]

On 13 November 2011, the ACO organized the 2011 6 Hours of Zhuhai at Zhuhai International Circuit as the finale of the 2011 Intercontinental Le Mans Cup season.

In 2004, the GT Association, the organizer of Super GT, announced on 23 May that an All-Star race in China, scheduled for 4 to 6 October at ZIC.[19] But on 5 August 2004, JGTC announced that the race was cancelled, for reasons related to the Chinese organizer.[20]

A multi year deal was announced in 2006 that brought one of the American racing series to China. On 30 November 2006, Roberto Moreno made history as he took the 2007 DP01 Champ Car on track at the Zhuhai Circuit, marking the first time a Champ Car had run in China.[21]

Then the series had problems with its promoter, which settled in a court in the US, and was replaced. The new promoter did not have enough time to organize the race on the original May date and so the race was provisionally moved to October 2007. When the series failed to get F.I.A. approval for the October date the 2007 race was cancelled. The series was looking to race in Zhuhai for the 2008 season until the unification with Indy Racing League but most of the speculation had died down.

On 2 October 2003, Dragon Hill Corporation Ltd, part of , exercised its option to buy Lamdeal Investment Ltd, which is involved in managing Zhuhai International Circuit Ltd (ZICL), for US$1. LBS managing director, Datuk Lim Hock San said LBS believed in the potential of the ZIC circuit land, adding the acquisition "has come at an appropriate time. Upon completion of the exercise of the option, Dragon Hill will hold 100% of the entire issued and paid-up share capital of Lamdeal and Lamdeal will own 60% of ZICL," he said. [22]

Since 2005, the circuit has become a hive of track activities, with a large number of auto-related launches and events held at the circuit, as the battle for car sales in China heats up. Auto dealers and manufacturers try to lure more customers by allowing them to drive freely on the track and pampering them off it. 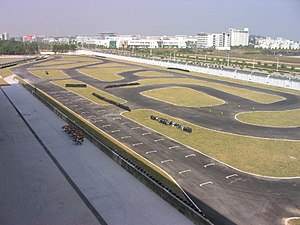 A kart circuit was added to the ZIC facility in 2004.

In 2011, Sunny Racing Club[23] was established. The club uses a one make Sunnny Kart chassis and 2-stroke 100cc Yamaha engine.

GTR2 has the circuit simulated based on the 2004 FIA GT Championship season. The circuit has also been simulated on the racing simulator Project CARS. In March 2018, the track was released for . 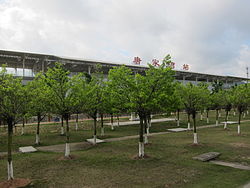 When Tangjiawan Station of the Guangzhu MRT opens in 2012, visitors will have direct rail access to the ZIC.

It is also served by the Guangzhou–Zhuhai Intercity Mass Rapid Transit, as Tangjiawan Station is within walking distance of the circuit's west grandstand.