This article is about electrical engineering. For other uses, see Admittance (disambiguation).

In electrical engineering, admittance is a measure of how easily a circuit or device will allow a current to flow. It is defined as the reciprocal of impedance. The SI unit of admittance is the siemens (symbol S); the older, synonymous unit is mho, and its symbol is ℧ (an upside-down uppercase omega Ω). Oliver Heaviside coined the term admittance in December 1887.[1]

Admittance is defined as

The dynamic effects of the material's susceptance relate to the universal dielectric response, the power law scaling of a system's admittance with frequency under alternating current conditions.

Conversion from impedance to admittance

The impedance, Z, is composed of real and imaginary parts,

Admittance, just like impedance, is a complex number, made up of a real part (the conductance, G), and an imaginary part (the susceptance, B), thus:

where G (conductance) and B (susceptance) are given by:

The magnitude and phase of the admittance are given by:

Transmission lines can span hundreds of kilometers, over which the line's capacitance can affect voltage levels. For short length transmission line analysis, which applies to lines shorter than 80 kilometers, this capacitance can be ignored and shunt components are not necessary in the model. Lines between 80 and about 250 kilometers, generally considered to be in the medium-line category, contain a shunt admittance governed by 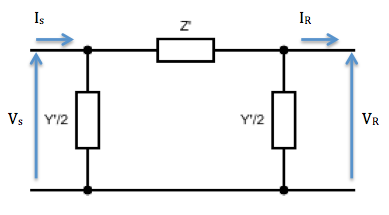