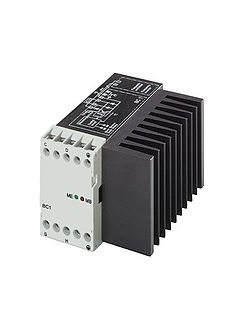 Braking choppers are inappropriate when:

Braking choppers are appropriate when:

Flux braking is another method, based on motor losses, for handling an overrunning load. When braking in the drive system is needed, the motor flux and thus also the magnetizing current component used in the motor are increased. The control of flux can be easily achieved through the direct torque control principle. With DTC the inverter is directly controlled to achieve the desired torque and flux for the motor. During flux braking the motor is under DTC control which guarantees that braking can be made according to the specified speed ramp. This is very different from the DC injection braking typically used in drives. In the DC injection method DC current is injected to the motor so that control of the motor flux is lost during braking. The flux braking method based on DTC enables the motor to shift quickly from braking to motoring power when requested.