In electricity (electromagnetism), the electric susceptibility (

; Latin: susceptibilis "receptive") is a dimensionless proportionality constant that indicates the degree of polarization of a dielectric material in response to an applied electric field. The greater the electric susceptibility, the greater the ability of a material to polarize in response to the field, and thereby reduce the total electric field inside the material (and store energy). It is in this way that the electric susceptibility influences the electric permittivity of the material and thus influences many other phenomena in that medium, from the capacitance of capacitors to the speed of light.[1][2]

Electric susceptibility is defined as the constant of proportionality (which may be a matrix) relating an electric field E to the induced dielectric polarization density P such that:

The susceptibility is related to its relative permittivity (dielectric constant)

So in the case of a vacuum:

At the same time, the electric displacement D is related to the polarization density P by:

This introduces a complication however, as locally the field can differ significantly from the overall applied field. We have:

Thus only if the local field equals the ambient field can we write:

Otherwise, one should find a relation between the local and the macroscopic field. In some materials, the Clausius–Mossotti relation holds and reads

Ambiguity in the definition

The definition of the molecular polarizability depends on the author. In the above definition,

are in SI units and the molecular polarizability

has the dimension of a volume (m3). Another definition[3] would be to keep SI units and to integrate

In this second definition, the polarizability would have the SI unit of C.m2/V. Yet another definition exists[4] where

are expressed in the cgs system and

is still defined as

the dimension of a volume, as in the first definition, but with a value that is

In many materials the polarizability starts to saturate at high values of electric field. This saturation can be modelled by a nonlinear susceptibility. These susceptibilities are important in nonlinear optics and lead to effects such as second-harmonic generation (such as used to convert infrared light into visible light, in green laser pointers).

The standard definition of nonlinear susceptibilities in SI units is via a Taylor expansion of the polarization's reaction to electric field:[5]

(Except in ferroelectric materials, the built-in polarization is zero, 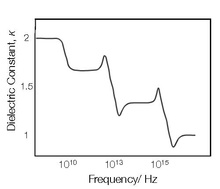 Schematic plot of the dielectric constant as a function of light frequency showing several resonances and plateaus indicating the activation of certain processes which can respond to the perturbation on the timescales of the frequency of the light. This demonstrates that thinking of the susceptibility in terms of its Fourier transform is useful, as light is a constant-frequency perturbation to a material

In general, a material cannot polarize instantaneously in response to an applied field, and so the more general formulation as a function of time is

That is, the polarization is a convolution of the electric field at previous times with time-dependent susceptibility given by

. The upper limit of this integral can be extended to infinity as well if one defines

It is more convenient in a linear system to take the Fourier transform and write this relationship as a function of frequency. Due to the convolution theorem, the integral becomes a product,

Moreover, the fact that the polarization can only depend on the electric field at previous times (i.e.

), a consequence of causality, imposes Kramers–Kronig constraints on the susceptibility