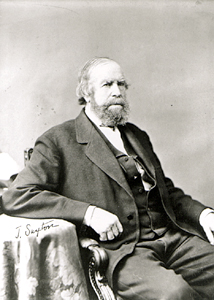 Joseph Saxton (March 22, 1799 – October 26, 1873) was an American inventor, watchmaker, machinist, and photographer from Pennsylvania. A daguerrotype taken by Saxton in 1839 is the oldest known photograph taken in the United States.[1]

Joseph Saxton was born in Huntingdon, Pennsylvania and first entered as an apprentice to a watchmaker when he was twelve years old.[2] Saxon was the son of a Mr. Saxton, a mechanic, and Elizabeth Ashbaugh, daughter of John Ashbaugh Sr.[3]

In 1817, aged 18, Joseph Saxton moved to Philadelphia where he found employment as a watchmaker, engraver, and apprentice in the machine shop of Isaiah Lukens.[4] During this time, he made his first inventions: a machine for cutting the teeth of marine chronometer wheels and an escapement and compensating pendulum for clocks. He also helped Lukens with the construction of a clock for the newly-rebuilt steeple of the Independence Hall.[5]

In 1884, an anecdote about Saxton's apprenticeship was published by George Escol Sellers, who worked with him in Lukens' shop:

"From the time of Saxton's coming to Philadelphia we were intimate and warm friends until his death. The first summer vacation of Lukens' after Saxton commenced to work with him, his shop was not closed as usual, but Saxton was left in charge, "to tinker," as Lukens said, with anything he liked. He planned, and was making for himself a cane gun. My elder brother and myself each concluded to make one ... I was in his shop beside Saxton doing that little job, when Lukens, who had unexpectedly returned from his summer trip, came in. He looked at, and asked what I was doing. On examining the plan, he suggested some slight alterations. Saxton showed his gun that was completed. He had worked out the plan himself and Lukens was greatly pleased with its simplicity."[4]

Looking to further his education, Joseph Saxton traveled to London, England in 1828 and resided there nine years. For most of his stay he was employed by the Adelaide Gallery of Practical Science, a museum for the public that demonstrated new inventions and scientific principles.[6] While working for the gallery, Saxton invented the magneto-electric machine, an apparatus for measuring the velocity of vessels, a device for measuring the height of water in a steam boiler, the riflescope, and the fountain pen prototype.[7]

Return to the US 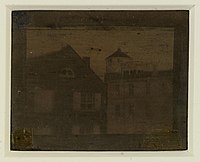 An 1839 daguerreotype of Central High School in Philadelphia, Pennsylvania taken by Joseph Saxton is alleged to be the oldest photograph taken in the U.S.

After almost a decade abroad, Saxton returned to Philadelphia in 1837 and accepted a position at the Philadelphia Mint, first as superintended the making of machinery and then as curator of weights and measures, accurate sets of which were furnished to national and State governments. Among his inventions of this time may be mentioned a mirror comparator for comparing standards of length and a new form of dividing engine; a self-registering tide gauge, and an immersed hydrometer.

In the fall of 1839, Saxton used a daguerreotype to take what is generally considered to be the first known photograph taken in the U.S. The image was taken from the window of his office at the Philadelphia Mint and captured the cupola of Central High School and a portion of the State Armory building.[8] It was taken on a sheet of polished metal. A seidlitz powder box with a few flakes of iodine answered for a coating box, while a cigar box and burning glass were improvised for a camera. An iron spoon served to heat the mercury to develop the plate. The picture which was produced is owned by the Historical Society of Pennsylvania.[9]

The first reference to the photograph appeared on 24 October 1839 in the United States Gazette.[8] An 1897 publication about public schools of Philadelphia indicates it was taken on October 16, 1839, the day after the definite account of Daguerre's process was published in Philadelphia.[9]

From 1843 until his death, three decades later, he was superintendent of weights and measures for the United States Coast Survey.[2] He died in Washington, D.C. on 26 October 1873.[8]