Skip to content
Electric motor that produces a linear force 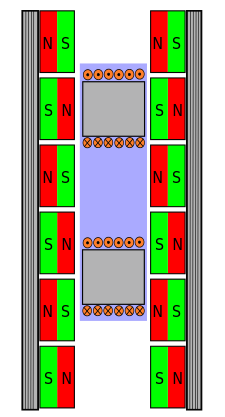 Free-body diagram of a U-channel synchronous linear motor. The view is perpendicular to the channel axis. The two coils at centre are mechanically connected, and are energized in "quadrature" (meaning a phase difference of 90° (π/2 radians) between the flux of the magnets and the flux of the coils). The bottom and upper coils in this particular case have a phase difference of 90°, making this a two phase motor. (Not to scale) 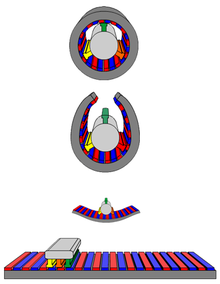 A linear motor is an electric motor that has had its stator and rotor "unrolled", thus, instead of producing a torque (rotation), it produces a linear force along its length. However, linear motors are not necessarily straight. Characteristically, a linear motor's active section has ends, whereas more conventional motors are arranged as a continuous loop.

A typical mode of operation is as a Lorentz-type actuator, in which the applied force is linearly proportional to the current and the magnetic field

Linear motors are by far most commonly found in high accuracy engineering[1] applications. It is a thriving field of applied research with dedicated scientific conferences[2] and engineering text books.[3]

High-acceleration linear motors are typically used in studies of hypervelocity collisions, as weapons, or as mass drivers for spacecraft propulsion.[citation needed] They are usually of the AC linear induction motor (LIM) design with an active three-phase winding on one side of the air-gap and a passive conductor plate on the other side. However, the direct current homopolar linear motor railgun is another high acceleration linear motor design. The low-acceleration, high speed and high power motors are usually of the linear synchronous motor (LSM) design, with an active winding on one side of the air-gap and an array of alternate-pole magnets on the other side. These magnets can be permanent magnets or electromagnets. The motor for the Shanghai maglev train, for instance, is an LSM.

Brush (electric) linear motors were used in industrial automation applications prior to the invention of Brushless linear motors. Compared with three phase Brushless motors, which are typically being used today, brush motors operates with a single phase.[5] Brush linear motors have lower cost since they do not need moving cables and three phase servo drives. However, they require higher maintenance since their brushes wear out.

In this design the rate of movement of the magnetic field is controlled, usually electronically, to track the motion of the rotor. For cost reasons synchronous linear motors rarely use commutators, so the rotor often contains permanent magnets, or soft iron. Examples include coilguns and the motors used on some maglev systems, as well as many other linear motors. In high precision industrial automation linear motors are typically configured with a magnet stator and a moving coil. Hall effect sensor is attached to the rotor to track the magnetic flux of the stator. The electrical current is typically provided from a stationary servo drive to the moving coil by a moving cable inside a cable carrier.

In this design, the force is produced by a moving linear magnetic field acting on conductors in the field. Any conductor, be it a loop, a coil or simply a piece of plate metal, that is placed in this field will have eddy currents induced in it thus creating an opposing magnetic field, in accordance with Lenz's law.[6] The two opposing fields will repel each other, thus creating motion as the magnetic field sweeps through the metal.

In this design a large current is passed through a metal sabot across sliding contacts that are fed from two rails. The magnetic field this generates causes the metal to be projected along the rails.

Efficient and compact design applicable to replacement of pneumatic cylinders.

The history of linear electric motors can be traced back at least as far as the 1840s, to the work of Charles Wheatstone at King's College London,[7] but Wheatstone's model was too inefficient to be practical. A feasible linear induction motor is described in the U.S. Patent 782,312 (1905 - inventor Alfred Zehden of Frankfurt-am-Main), for driving trains or lifts. The German engineer Hermann Kemper built a working model in 1935.[8] In the late 1940s, Dr. Eric Laithwaite of Manchester University, later Professor of Heavy Electrical Engineering at Imperial College in London developed the first full-size working model. In a single sided version the magnetic repulsion forces the conductor away from the stator, levitating it, and carrying it along in the direction of the moving magnetic field. He called the later versions of it magnetic river. 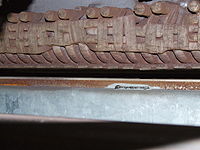 Because of these properties, linear motors are often used in maglev propulsion, as in the Japanese Linimo magnetic levitation train line near Nagoya. However, linear motors have been used independently of magnetic levitation, as in the Bombardier Innovia Metro systems worldwide and a number of modern Japanese subways, including Tokyo's Toei Ōedo Line.

Similar technology is also used in some roller coasters with modifications but, at present, is still impractical on street running trams, although this, in theory, could be done by burying it in a slotted conduit.

Outside of public transportation, vertical linear motors have been proposed as lifting mechanisms in deep mines, and the use of linear motors is growing in motion control applications. They are also often used on sliding doors, such as those of low floor trams such as the Alstom Citadis and the Socimi Eurotram. Dual axis linear motors also exist. These specialized devices have been used to provide direct X-Y motion for precision laser cutting of cloth and sheet metal, automated drafting, and cable forming. Most linear motors in use are LIM (linear induction motor), or LSM (linear synchronous motor). Linear DC motors are not used due to higher cost and linear SRM suffers from poor thrust. So for long run in traction LIM is mostly preferred and for short run LSM is mostly preferred. 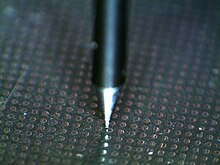 High-acceleration linear motors have been suggested for a number of uses. They have been considered for use as weapons, since current armour-piercing ammunition tends to consist of small rounds with very high kinetic energy, for which just such motors are suitable. Many amusement park launched roller coasters now use linear induction motors to propel the train at a high speed, as an alternative to using a lift hill. The United States Navy is also using linear induction motors in the Electromagnetic Aircraft Launch System that will replace traditional steam catapults on future aircraft carriers. They have also been suggested for use in spacecraft propulsion. In this context they are usually called mass drivers. The simplest way to use mass drivers for spacecraft propulsion would be to build a large mass driver that can accelerate cargo up to escape velocity, though RLV launch assist like StarTram to low Earth orbit has also been investigated.

High-acceleration linear motors are difficult to design for a number of reasons. They require large amounts of energy in very short periods of time. One rocket launcher design[9] calls for 300 GJ for each launch in the space of less than a second. Normal electrical generators are not designed for this kind of load, but short-term electrical energy storage methods can be used. Capacitors are bulky and expensive but can supply large amounts of energy quickly. Homopolar generators can be used to convert the kinetic energy of a flywheel into electric energy very rapidly. High-acceleration linear motors also require very strong magnetic fields; in fact, the magnetic fields are often too strong to permit the use of superconductors. However, with careful design, this need not be a major problem.[10]

Linear motors are commonly used for actuating high performance industrial automation equipment. Their advantage, unlike any other commonly used actuator, such as ball screw, timing belt, or rack and pinion, is that they provide any combination of high precision, high velocity, high force and long travel.

Linear motors are widely used. One of the major uses of linear motors is for propelling the shuttle in looms.

Linear motors are sometimes used to create rotary motion, for example, they have been used at observatories to deal with the large radius of curvature.

Linear motors may also be used as an alternative to conventional chain-run lift hills for roller coasters. The coaster Maverick at Cedar Point uses one such linear motor in place of a chain lift.

A linear motor has been used for accelerating cars for crash tests.[11]

All of the following applications are in rapid transit and have the active part of the motor in the cars.[13][14]

Originally developed in the late 1970s by UTDC in Canada as the Intermediate Capacity Transit System (ICTS). A test track was constructed in Millhaven, Ontario, for extensive testing of prototype cars, after which three lines were constructed:

ICTS was sold to Bombardier Transportation in 1991 and later known as Advanced Rapid Transit (ART) before adopting its current branding in 2011. Since then, several more installations have been made:

One of the biggest challenges faced by Japanese railway engineers in the 1970s to the 1980s was the ever increasing construction costs of subways. In response, the Japan Subway Association began studying on the feasibility of the "mini-metro" for meeting urban traffic demand in 1979. In 1981, the Japan Railway Engineering Association studied on the use of linear induction motors for such small-profile subways and by 1984 was investigating on the practical applications of linear motors for urban rail with the Japanese Ministry of Land, Infrastructure, Transport and Tourism. In 1988, a successful demonstration was made with the Limtrain at Saitama and influenced the eventual adoption of the linear motor for the Nagahori Tsurumi-ryokuchi Line in Osaka and Toei Line 12 (present-day Toei Oedo Line) in Tokyo.[16]

To date, the following subway lines in Japan use linear motors and use overhead lines for power collection:

There are many roller coasters throughout the world that use LIMs to accelerate the ride vehicles. The first being Flight of Fear at Kings Island and Kings Dominion, both opening in 1996. Battlestar Galctica: Human VS Cylon & Revenge of the Mummy at Universal Studios Singapore opened in 2010. They both use LIMs to accelerate from certain point in the rides. Revenge of the Mummy also is located at Universal Studios Hollywood and Universal Studios Florida.The Incredible Hulk Coaster and VelociCoaster at Universal's Islands of Adventure also uses linear motors. Rock 'n' Roller Coaster Starring Aerosmith was opened in 1999 in Disney's Hollywood Studios that uses an LSM to launch the vehicles into the indoor, blacklight ride enclosure.