The Mendocino motor is a solar-powered magnetically levitated electric motor. With a very low power output, they are generally used as technical demonstrations only, but are a popular construction project with electronic enthusiasts. 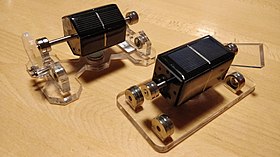 Mendocino motors, showing their rotors magnetically levitated over their bases. They have different solar panel configurations, but both have internal coils. 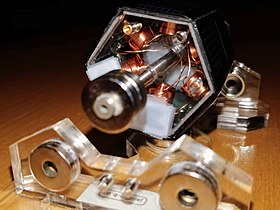 Detail of Mendocino motor showing internal coils and giving an idea about electrical connection. Also visible is some tape used to balance the rotor.

The motor consists of a rotor shaft with an array of (typically four to eight) solar panels and electromagnetic coils arranged in a barrel shape around the centre of the shaft; this rotor is horizontally mounted in a frictionless radial bearings over a central magnet on the base plate of the motor. The final 6th degree of freedom, the axial or thrust direction, is not levitated, but rather supported by a steel ball point of contact (low friction).

In a modification new constructors used one coil each supported by one opposite solar panel. Its easier to produce but this way of construction isn't that favorable as the light commutated version. Many of these motors need an initial impulse to move.

The idea of a light-commutated motor, where solar cells power the individual coils of a motor, was first described by Daryl Chapin in an experiment kit from 1962 about solar energy.[1] The kit was distributed by Bell Labs, where Chapin together with his colleagues Calvin Fuller and Gerald Pearson had invented the modern solar cell eight years earlier, in 1954.[2] Chapin's version of the motor uses a vertical glass cylinder on a needle point as a low-friction bearing.

A magnetic suspension of the rotor was added in 1994 by eccentric inventor Larry Spring to create "Larry Spring's Magnetic Levitation Mendocino Brushless Solar Motor"[3] - more commonly called "Mendocino Motor" with a horizontal rotor. The name comes from the location of his workshop on the Mendocino coast of California.[3]