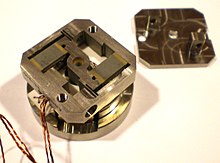 The growth and forming of piezoelectric crystals is a well-developed industry, yielding very uniform and consistent distortion for a given applied potential difference. This, combined with the minute scale of the distortions, gives the piezoelectric motor the ability to make very fine steps. Manufacturers claim precision to the nanometer scale. High response rate and fast distortion of the crystals also let the steps happen at very high frequencies—upwards of 5 MHz. This provides a maximum linear speed of approximately 800 mm per second, or nearly 2.9 km/h.

A unique capability of piezoelectric motors is their ability to operate in strong magnetic fields. This extends their usefulness to applications that cannot use traditional electromagnetic motors—such as inside nuclear magnetic resonance antennas. The maximum operating temperature is limited by the Curie temperature of the used piezoelectric ceramic and can exceed +250C.

The main benefits of piezoelectric motors are the high positioning precision, stability of position while unpowered, and the ability to be fabricated at very small sizes or in unusual shapes such as thin rings. Common applications of piezoelectric motors include focusing systems in camera lenses as well as precision motion control in specialised applications such as microscopy.

Two different ways are generally available to control the friction along the stator-rotor contact interface, traveling-wave vibration and standing-wave vibration.[3] Some of the earliest versions of practical motors in the 1970s, by Sashida, for example, used standing-wave vibration in combination with fins placed at an angle to the contact surface to form a motor, albeit one that rotated in a single direction. Later designs by Sashida and researchers at Matsushita, ALPS, and Canon made use of traveling-wave vibration to obtain bi-directional motion, and found that this arrangement offered better efficiency and less contact interface wear. An exceptionally high-torque 'hybrid transducer' ultrasonic motor uses circumferentially-poled and axially-poled piezoelectric elements together to combine axial and torsional vibration along the contact interface, representing a driving technique that lies somewhere between the standing and traveling-wave driving methods.

The inchworm motor uses piezoelectric ceramics to push a stator using a walking-type motion. These piezoelectric motors use three groups of crystals—two locking, and one motive that permanently connects to either the motor's casing or stator (not both). The motive group, sandwiched between the other two, provides the motion.

The non-powered behaviour of this piezoelectric motor is one of two options: normally locked or normally free. A normally free type allows free movement when unpowered but can still be locked by applying a voltage.

Inchworm motors can achieve nanometre-scale positioning by varying the voltage applied to the motive crystal while one set of locking crystals is engaged.

The actuation process of the inchworm motor is a multistep cyclical process:[2]

Not to be confused with the similarly named electromagnetic stepper motor, these motors are similar to the inchworm motor, however, the piezoelectric elements can be bimorph actuators which bend to feed the slider rather than using a separate expanding and contracting element.[4]

The direct drive piezoelectric motor creates movement through continuous ultrasonic vibration. Its control circuit applies a two-channel sinusoidal or square wave to the piezoelectric elements that matches the of the threaded tube—typically an ultrasonic frequency of 40 kHz to 200 kHz. This creates orbital motion that drives the screw. 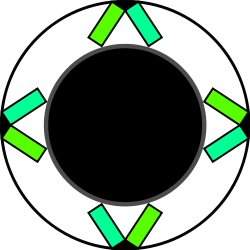 Very simple single-action stepping motors can be made with piezoelectric crystals. For example, with a hard and rigid rotor-spindle coated with a thin layer of a softer material (like a polyurethane rubber), a series of angled piezoelectric transducers can be arranged. (see Fig. 2). When the control circuit triggers one group of transducers, they push the rotor one step. This design cannot make steps as small or precise as more complex designs, but can reach higher speeds and is cheaper to manufacture.

The first U.S. patent to disclose a vibrationally-driven motor may be "Method and Apparatus for Delivering Vibratory Energy" (U.S. Pat. No. 3,184,842, Maropis, 1965). The Maropis patent describes a "vibratory apparatus wherein longitudinal vibrations in a resonant coupling element are converted to torsional vibrations in a toroid type resonant terminal element." The first practical piezomotors were designed and produced by V. Lavrinenko in Piezoelectronic Laboratory, starting 1964, Kiev Polytechnic Institute, USSR. Other important patents in the early development of this technology include: