British naval gun
This article is about the anti-aircraft autocannon. For the World War II anti-tank gun, see Ordnance QF 2 pounder.
Not to be confused with the QF 1-pounder also known as the pom-pom.
Type of Autocannon

The 2-pounder gun,[note 1] officially designated the QF 2-pounder (QF denoting "quick firing") and universally known as the pom-pom, was a 40-millimetre (1.6 in) British autocannon, used as an anti-aircraft gun by the Royal Navy. The name came from the sound that the original models make when firing. This QF 2-pounder was not the same gun as the Ordnance QF 2 pounder, used by the British Army as an anti-tank gun and a tank gun, although they both fired 2-pound (0.91 kg), 40-millimetre (1.6 in) projectiles. 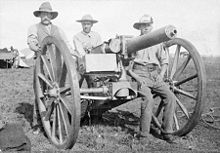 The first gun to be called a pom-pom was the 37 mm Nordenfelt-Maxim or "QF 1-pounder" introduced during the Second Boer War, the smallest artillery piece of that war. It fired a shell one pound in weight accurately over a distance of 3,000 yd (2,700 m). The barrel was water-cooled, and the shells were belt-fed from a 25-round fabric belt. This "auto cannon" fired explosive rounds (smokeless ammunition) at 450 rounds per minute. The Boers used them against the British, who, seeing their utility, bought guns from Vickers, who had acquired Maxim-Nordenfelt in 1897.[3][4]

During the First World War, it was used in the trenches of the Western Front against aircraft.

The first naval pom-pom was the QF 1.5-pdr Mark I, a piece with a calibre of 37 mm (1.46 in) and a barrel 43 calibres long. This was trialed in the Arethusa-class light cruisers HMS Arethusa and Undaunted, but did not enter full service, being replaced instead by a larger weapon, the QF 2-pdr Mark II (see below). 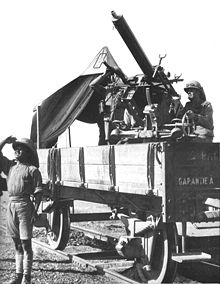 The QF 2-pounder Mark II was essentially a scaled-up version of the QF 1 pounder Maxim gun produced by Vickers. It was a 40 mm calibre gun with a water-cooled barrel and a Vickers-Maxim mechanism. It was ordered in 1915 by the Royal Navy as an anti-aircraft weapon for ships of cruiser size and below. The original models fired from hand-loaded fabric belts, although these were later replaced by steel-link belts. This "scaling-up" process was not entirely successful, as it left the mechanism rather light and prone to faults such as rounds falling out of the belts. In 1915, sixteen 2-pounders were mounted in armoured lorries as the Pierce-Arrow armoured AA lorry. In 1918, one example of this weapon was experimentally mounted on the upper envelope of His Majesty's Airship 23r.[5]

Surviving weapons were brought out of storage to see service in World War II, mainly on board ships such as naval trawlers, Motor Boats and "armed yachts". It was used almost exclusively in the single-barrel, unpowered pedestal mountings P Mark II (Royal Navy nomenclature gave mountings and guns their own distinct Mark numbers) except for a small number of weapons on the mounting Mark XV, which was a twin-barreled, powered mount. These were too heavy to be of any use at sea, and were therefore mounted ashore. All were scrapped by 1944.

Some 7,000 guns were made. The gun was also used by the Japanese as the 40 mm/62 "HI" Shiki. The Regia Marina also used it from the Great War throughout World War II, although it was superseded in the 1930s as a primary AA weapon on Italian warships by more modern guns such as the Cannone-Mitragliera da 37/54 (Breda).[7] 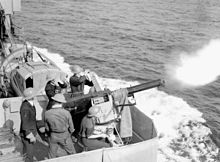 Gunners on HMCS Assiniboine fire their 2 pdr while escorting a troop convoy from Halifax to Britain, 10 July 1940. 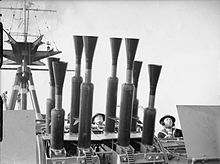 8-barrelled "Chicago piano" on HMS Rodney, viewed from below 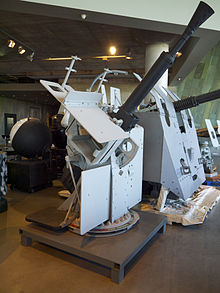 The Royal Navy had identified the need for a rapid-firing, multi-barrelled close-range anti-aircraft weapon at an early stage. Design work for such a weapon began in 1923 based on the earlier Mark II, undoubtedly to utilise the enormous stocks of 2-pounder ammunition left over from the First World War. Lack of funding led to a convoluted and drawn-out design and trials history, and it was not until 1930 that these weapons began to enter service. Known as the QF 2-pounder Mark VIII, it is usually referred to as the "multiple pom-pom".

The initial mounting was the 11.8 to 17.35 ton,[8][9] eight-barrelled mounting Mark V (later Mark VI), suitable for ships of cruiser and aircraft carrier size upward. From 1935, the quadruple mounting Mark VII, essentially half a Mark V or VI, entered service for ships of destroyer and cruiser size. These multiple gun mounts required four different guns and were nicknamed the "Chicago Piano".[6] The mount had two rows each of two or four guns. Guns were produced in both right- and left-hand and "inner" and "outer" so that the feed and ejector mechanisms matched.

Single-barrelled mounts, the Mark VIII (manual) and Mark XVI (power operated), were also widely used, mainly in small escorts (such as the Flower-class corvettes) and coastal craft (especially early Fairmile D motor torpedo boats). The Mark XVI mounting was related to the twin mounting Mark V for the Oerlikon 20 mm cannon and the "Boffin" mounting for the Bofors 40 mm gun. Magazines ranged from 140 rounds per gun for the eight-barrelled mount to 56 rounds for the single mounts.[10] This large ammunition capacity gave the eight-barrelled mount the ability to fire continuously for 73 seconds without reloading. A high velocity (HV), 1.8 lb (820 g), round was developed for the pom-pom, just prior to World War II, which raised the new gun muzzle velocity from 2,040 ft/s (622 m/s) to 2400 ft/s (732 m/s).

The United States Navy also considered adopting the pom-pom gun prior to its entry into the Second World War, and conducted a series of trials between their own 1.1" gun, the U.S. Army 37 mm Gun, the Vickers 40 mm pom-pom, and the Bofors 40 mm:

Among the machine guns under consideration were the Army's 37-mm and the British Navy's 2-pounder, more commonly known as the "pompom." The decision soon narrowed to a choice between the Bofors and the British gun. The British were anxious to have their gun adopted, and the fact that British aid would be readily available in initiating manufacture was put forward as an argument in favor of its selection. The 2-pounder, moreover was giving a good account of itself on British ships. On the other hand, there was the distinct disadvantage that the gun was designed for cordite powder, and no manufacturing facilities for the production of this ammunition were available in the United States. Thorough study revealed that the gun could not be converted to take American powder. Another consideration was muzzle velocity: The pompom had a relatively low velocity, 2350 feet per second as compared with 2830 for the Bofors. The success of the pompom in action was more than offset by the proved qualities of the Bofors in the hands of a number of powers who were using it, and the Bureau decided to join that group. Shortly after the Bureau's selection of the Bofors, British naval officials also decided to adopt the gun.[11]

An advanced weapon when introduced, by the outbreak of World War II advances in aircraft would have made it obsolete but for the introduction of the high-velocity round and new director designs. It was intended that the curtain of fire it threw up would be sufficient to deter attacking aircraft, which it did, but was hampered by the ineffective Mk III director.[12] The MK IV Director with a Gyro Rate Unit and Type 282 radar[13] was a great advance and was introduced on the King George V-class battleships. In January 1941, HMS Illustrious′s Mk VIII (HV) mountings performed flawlessly firing 30,000 rounds with very few stoppages.[12] When HMS Prince of Wales was attacked and sunk by Japanese aircraft near Singapore, the subsequent report judged that a single 40 mm Bofors gun firing tracer was a more effective anti-aircraft weapon[14][15] than a multiple pom-pom in director control, as the pom-poms did not have tracer ammunition and the pom-pom ammunition had deteriorated badly in its ready use lockers, while the Type 282 radar units also failed in the equatorial heat.[16][17] In the same action, the Commissioned Gunner of HMS Repulse spent the whole action running from one pom-pom mount to another trying to keep them operational due to the faulty ammunition. The pom-poms on Repulse shot down two of the four confirmed kills made by Force Z,[18] while Prince of Wales' pom-poms did record hits on enemy aircraft.[19]

The Royal Navy judged the pom-pom's effectiveness to range from about half that of the Bofors, per gun, against torpedo planes to about equal against Kamikaze attackers.[20] It was a ubiquitous weapon that outnumbered the Bofors gun in Commonwealth naval service[21] up to the end of World War II and it shot down many Axis aircraft. Later innovations such as Remote Power Control (RPC) coupled to a radar-equipped tachymetric (speed predicting) director increased the accuracy enormously and problems with the fuses and reliability were also remedied. The single mountings received a reprieve toward the end of the war as the 20 mm Oerlikon guns had insufficient stopping power to counter Japanese kamikaze aircraft and there were insufficient numbers of Bofors guns to meet demand.

The QF 2-pounder Mark XIV, or Rolls 2 pounder, was developed by Rolls-Royce as a competitor to the 40 mm "Vickers S" gun as an aircraft weapon. The latter was the more successful design, and found some use as an anti-tank weapon. A reworked version was adopted by the Royal Navy as a weapon for Motor Gun Boats, being adopted in the Fairmile C type. It had a semi-automatic horizontally sliding breech block, and was shipped on a manually trained pedestal mount. The weapon was not a success, and of the 1,200 ordered only some 600 were delivered. It was replaced by the Molins 6-pounder gun, the British Army's Ordnance QF 6 pounder gun (57 mm) with an auto-loader.