listen)) is a commune in the northern suburbs of Paris, France. It is located 9.4 km (5.8 mi) from the centre of Paris. Saint-Denis is a subprefecture (French: sous-préfecture) of the department of Seine-Saint-Denis, being the seat of the arrondissement of Saint-Denis.

Saint-Denis is home to the royal necropolis of the Basilica of Saint-Denis and was also the location of the associated abbey. It is also home to France's national football and rugby stadium, the Stade de France, built for the 1998 FIFA World Cup.

Saint-Denis is a formerly industrial suburb currently changing its economic base.

Inhabitants of Saint-Denis are called Dionysiens.[3]

Location of Saint-Denis in Metropolitan Paris.

Until the 3rd century, Saint-Denis was a small settlement called Catolacus or Catulliacum, probably meaning "estate of Catullius", a Gallo-Roman landowner. About 250 AD, the first bishop of Paris, Saint Denis, was martyred on Montmartre hill and buried in Catolacus. Shortly after 250 AD, his grave became a shrine and a pilgrimage centre, with the building of the Abbey of Saint Denis, and the settlement was renamed Saint-Denis.

In 1793, during the French Revolution, Saint-Denis was renamed Franciade in a gesture of rejection of religion. In 1803, however, under the Consulate of Napoléon Bonaparte, the city reverted to its former name of Saint-Denis.

During its history, Saint-Denis has been closely associated with the French royal house. Starting from Dagobert I (c. 603–639), almost every French king was buried in the Basilica.

However, Saint-Denis is older than that. In the 2nd century, there was a Gallo-Roman village named Catolacus on the location that Saint-Denis occupies today. Saint Denis, the first bishop of Paris and patron saint of France, was martyred in about 250 AD and buried in the cemetery of Catolacus. Denis' tomb quickly became a place of worship. Around 475 AD, Sainte Geneviève had a small chapel erected on Denis' tomb, which by then had become a popular destination for pilgrims. It was this chapel that Dagobert I had rebuilt and turned into a royal monastery. Dagobert granted many privileges to the monastery: independence from the bishop of Paris, the right to hold a market, and, most importantly, he was buried in Saint-Denis; a tradition which was followed by almost all his successors. During the Middle Ages, because of the privileges granted by Dagobert, Saint-Denis grew to become very important. Merchants from all over Europe (and indeed from the Byzantine Empire) came to visit its market.

In 1140, Abbot Suger, counselor to the King, granted further privileges to the citizens of Saint-Denis. He also started the work of enlarging the Basilica of Saint Denis that still exists today, often cited as the first example of high early Gothic Architecture.[4][5] The new church was consecrated in 1144.

Saint-Denis was depopulated in the Hundred Years' War; of its 10,000 citizens, only 3,000 remained after the war. 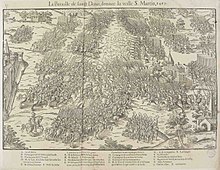 During the French Wars of Religion, the Battle of Saint-Denis was fought between Catholics and Protestants on 10 November 1567. The Protestants were defeated, but the Catholic commander Anne de Montmorency was killed. In 1590, the city surrendered to Henry IV, who converted to Catholicism in 1593 in the abbey of Saint-Denis.

King Louis XIV (1638–1715) started several industries in Saint-Denis: weaving and spinning mills and dyehouses. His successor, Louis XV (1710–1774), whose daughter was a nun in the Carmelite convent, took a lively interest in the city: he added a chapel to the convent and also renovated the buildings of the royal abbey. 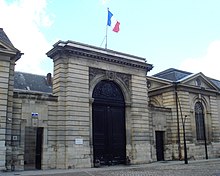 During the French Revolution, not only was the city renamed "Franciade" from 1793 to 1803, but the royal necropolis was looted and destroyed. The remains were removed from the tombs and thrown together; during the French Restoration, since they could not be sorted out anymore, they were reburied in a common ossuary.

The last king to be interred in Saint-Denis was Louis XVIII (1755 – 1824). After France became a republic and an empire, Saint-Denis lost its association with royalty.

During the 19th century, Saint-Denis became increasingly industrialised. Transport was much improved: in 1824 the Canal Saint-Denis was constructed, linking the Canal de l'Ourcq in the northeast of Paris to the River Seine at the level of L'Île-Saint-Denis, and in 1843 the first railway reached Saint-Denis. By the end of the century, there were 80 factories in Saint-Denis.

The presence of so many industries also gave rise to an important socialist movement. In 1892, Saint-Denis elected its first socialist administration, and by the 1920s, the city had acquired the nickname of la ville rouge, the red city. Until Jacques Doriot in 1934, all mayors of Saint-Denis were members of the Communist Party.

During the Second World War, after the defeat of France, Saint-Denis was occupied by the Germans on 13 June 1940. There were several acts of sabotage and strikes, most notably on 14 April 1942 at the Hotchkiss factory. After an insurgency which started on 18 August 1944, Saint-Denis was liberated by the 2nd Armored Division (France) on 27 August 1944.

After the war, the economic crisis of the 1970s and 1980s hit the city, which was strongly dependent on its heavy industry.

During the 1990s, however, the city started to grow again. The 1998 FIFA World Cup provided an enormous impulse; the main stadium for the tournament, the Stade de France, was built in Saint-Denis, along with many infrastructural improvements, such as the extension of the metro to Saint-Denis-Université. The stadium is used by the national football and rugby teams for friendly matches. The Coupe de France, Coupe de la Ligue and Top 14 final matches are held there, as well as the Meeting Areva international athletics event.

Rue Gabriel Péri, a pedestrian zone in Saint-Denis, in 2012.

In 2003, together with Paris, Saint-Denis hosted the second European Social Forum.

On 13–14 November 2015, Saint-Denis was the main location of a series of mass shootings and hostage-takings just outside the Stade de France. On 18 November, a major follow-up raid occurred. Several suspects were killed, including alleged mastermind Abdelhamid Abaaoud.[6]

In 2016, Saint-Denis was one of the host cities of the UEFA European Football Championships, including the opening game.[7]

As of 2008 18.1% of the population of Saint-Denis was Maghrebian.[8] Melissa K. Brynes, author of French Like Us? Municipal Policies and North African Migrants in the Parisian Banlieues, 1945–1975, wrote that in the middle of the 20th century, "few of [the Paris-area communes with North African populations] were as engaged with their migrant communities as the Dionysiens."[9] 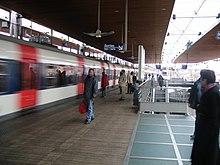 Saint-Denis is served by Metro, RER, tram, and Transilien connections. The Saint-Denis rail station, built in 1846, was formerly the only one in Saint-Denis, but today serves as an interchange station for the Transilien Paris – Nord (Line H) suburban rail line and RER line D.[10] 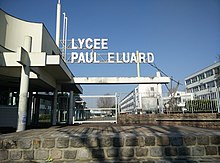 Saint-Denis is twinned with:

The DLC campaign Dead Kings of the 2014 video game Assassin's Creed Unity is set in a simulated 1794's Franciade.