Autocar (originally The Autocar) is a weekly British automobile magazine published by the Haymarket Media Group. It was first published in 1895[2] and refers to itself as "the world's oldest car magazine".[3] There are now several international editions including China, India, New Zealand and South Africa. 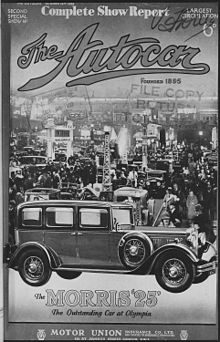 The publication was launched as The Autocar by Iliffe and Son Ltd.[4] "in the interests of the mechanically propelled road carriage" on 2 November 1895 when, it is believed, there were only six or seven cars in the United Kingdom. L. J. K. Setright[5] suggests that the magazine was set up by Henry Sturmey as an organ of propaganda for Harry J. Lawson, founder of the Daimler Company and a journalist on the magazine in its early days. Henry Sturmey stood down as editor of The Autocar magazine and left the company in 1901.[6]

Autocar claims to have invented the road test in 1928 when it analysed the Austin 7 Gordon England Sunshine Saloon. Autocar has been published weekly throughout its life with only strikes in the 1970s interrupting its frequency.

The magazine's name was changed from The Autocar to Autocar at the start of 1962.

In 1988 Autocar absorbed the rival magazine Motor, with which it had done battle on the newsstands since 1903. From the September 7 1988 issue the magazine became Autocar & Motor. It reverted to Autocar for the September 21 1994 issue.

The magazine has scored many firsts in its history including the first full road tests and independent performance tests of the Jaguar XJ220, McLaren F1, and the Porsche 911 GT1.

It was also the first magazine to produce independently recorded performance figures for the Bugatti Veyron, which were published in the 31 May 2006 issue.

The current editor is Mark Tisshaw, a former deputy editor, news editor and reporter for the magazine.[9]

Autocar has been licensed to publishers around the world, and is now published in sixteen countries outside the United Kingdom, including China, India, Indonesia, Japan, Malaysia, and Vietnam.[10]

In June of 2019, Autocar launched a tyre buying website under the name of Autocar Tyres in collaboration with Summit.[11] [12]