A sports sedan — also known as "sports saloon" — is a subjective term for a sedan/saloon car which is designed to have sporting performance or handling characteristics. 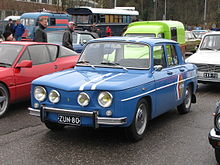 From the 1960s, the term sports sedan was increasingly applied by manufacturers to special versions of their vehicles that allowed them to enter production cars in motor races. These cars contained modifications not normally permitted by the regulations which therefore required cars to be homologated typically by selling them in minimum numbers to the public. Some of the earlier examples were the Alfa Romeo 1900, Renault R8 Gordini (1964), Triumph Dolomite and Lotus Cortina.

In the twentieth century, sports sedans used a manual transmission and rear-wheel drive. However as other transmission types and drivetrain layouts have become more widespread for sedans in general, these have also been used by sports sedans.

The term "sport sedan" was initially used in North America for luxury import sedans (i.e. BMW, Audi, and Mercedes-Benz). These cars gave higher priority to handling than the domestic luxury sedans (i.e. Cadillac and Lincoln), which were more focused on comfort. However, since the 2000s, the domestic brands have begun producing sports sedan models such as the Cadillac CTS and Lincoln LS.[5][6][7]

Another term sometimes used is to describe sports sedans in the US is muscle car, but that normally relates to V8-powered two-door coupe American cars.[8]