The product is sold specifically as CAID rather than CAD, and its tools and abilities are oriented more towards the "styling" aspect of design - that is to say, the product's housing and outer appearance. It does not go into mechanical detail like other CAD programs such as Siemens NX, Inventor, CATIA, Pro/ENGINEER and SolidWorks, but has a much more powerful set of tools for the creation of precisely sculpted curves and surfaces and all 'touch and feel' surfaces of any part that demands aesthetic finish.[promotional language]

In 1983, Alias Research was founded at Toronto, Ontario, Canada. Alias unveiled its first product Alias/1 in 1985 at SIGGRAPH '85 in San Francisco.

Initial versions ran only on Silicon Graphics computers and the Irix operating system, until late in the 1990s when the software was ported to Microsoft Windows. In 2011 Mac versions were launched. The company was a leader in high-end 3D graphics software.

In 1995, Alias Research was purchased by Silicon Graphics and merged Wavefront Technologies, another 3D software graphics company founded in 1984 at Santa Barbara, California, to form Alias/Wavefront which was later renamed as Alias Systems Corporation.

On October 4, 2005 Alias was acquired by Autodesk, StudioTools changed its name to Autodesk AliasStudio. It became part of Autodesk in 2006.

The product suite starts with Alias Design as the entry-level conceptual design system, progressing to Alias Surface, and then to Alias Automotive as the top-of-the-line product with all of the options.

Tools for sketching, modeling and visualization are combined in one software package. It meets the specialized needs of designers:[according to whom?] sketching, freedom to experiment with shape and form, creating organic shapes, visualization for design review, and data exchange with CAD packages.

As of version 2019, Autodesk Alias was split into separate standalone products: 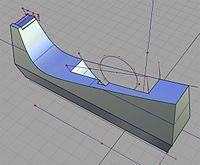 The program has two types of modelers within it: NURBS and polygons.