Bronica also Zenza Bronica (in Japanese: ゼンザブロニカ) was a Japanese manufacturer of classic medium-format roll film cameras and photographic equipment based in Tokyo, Japan. Their single-lens reflex (SLR) system-cameras competed with Pentax, Hasselblad, Mamiya and others in the medium-format camera market.

Before introduction of the first of what would become a dynasty of Zenza Bronica cameras in 1959, the Latinized Zenza Bronica name was already a popular Japanese luxury goods brand of the Shinkodo Works (in Japanese: 新光堂製作所) since 1947,[1] specialized in the production of intricate crafted and decorated personal accessories, such as metal cigarette lighters[2] and cases, cosmetic compacts, and watches,[3] of diverse styles and designs.[1]

The company's founder Zenzaburō Yoshino (in Japanese: 吉野善三郎, b. 25 January 1911 — d. 23 November 1988), wherefrom the Latinized Zenza Bronica brand name is derived, was the third son born into a Japanese rice merchant family.[1] At an early age Yoshino showed deep reverence for the technical innovation and mechanics of world-renowned cameras produced by the likes of Leica, Contax and Rollei.[1] Both fascinated and yet increasingly frustrated by the limitations of the cameras produced at that time period, where each camera's merits and demerits were not solved by just one camera, Yoshino visioned creating a high-precision interchangeable single-lens reflex camera modular system of his own design.[1]

Yoshino's ambition, however, would require substantial investment, which he gradually self-funded from his family business in transportation and his passion for cameras by the establishment of a small camera store in Tokyo's Kanda district.[1] Yoshino's camera store and his immense familiarity with deluxe foreign cameras became a huge success with photography enthusiasts in Japan, buying and selling luxury Leica and Contax cameras, which also gained popularity with US Army soldiers stationed in Japan after World War II.[1] This formed the funding basis for his founding in 1947 of the Shinkodo Works with a vision of camera production,[4] which at first produced Bronica brand luxury art deco accessories such as cigarette lighters and cases including watches, and positioned Bronica as a luxury brand in Japanese department stores, with popularity thriving among US Army soldiers in Japan.[1]

The Shinkodo Works was Yoshino's precursor production base and funding source for what would later serve his Bronica camera and photographic equipment manufacturing; later consolidated under the Zenza Bronica Kogyo Kabushiki Kaisha (Zenza Bronica Industries, Inc) company.[1][5] On 17 January 1952, the Shinkodo Works was directed by Yoshino to begin research and development of the Bronica prototype camera.[1]

The prototype was a modular camera named the "Yoshino Flex". In June 1956 the Shinkodo Works created its first handmade example camera, and on reaching perfection in October 1958 with Yoshino's eighth prototype camera,[1] the development costs had reached a sum of 200 million Yen, a huge sum at that time. The final prototype bore the Latinized nameplate "ZENZA BRONICA"—the Bronica Z (Zen-za) rollfilm camera—and first appeared at the Philadelphia Camera Show in March 1959, where it received ecstatic industry press coverage and left a deep lasting impression of being the world's dream camera.[1] The Bronica Z modular camera system, shortly later with slight modifications renamed the Zenza Bronica D (Deluxe)[6][7] and successor Bronicas, using large-coverage film format, high-quality Nikkor lenses supplied by the then Japan Optical Industries Co., Ltd.,[4] (Nikon Corporation) became instant successes in the deluxe camera market worldwide. The Bronica D was the Japanese answer and first serious challenger to the Swedish Hasselblad cameras, and in several technical ways outclassed the Swedish offerings.[8] Such was the design success of Bronica, that in the United States it attracted influential figures from the photographic industry such as Burt Keppler who met with Yoshino. Bronica later introduced optics and lens units of its own manufacture incorporating Seiko shutters with its later camera designs and held a portfolio of international patents.

Bronica was eventually acquired by the lens manufacturer Tamron Co., Ltd., in 1998 with emphasis on Bronica's optical lens manufacturing. In May 2000, Tamron introduced under the Bronica brand the RF645 rangefinder camera.[6] Tamron discontinued the brand's single-lens reflex camera models (ETRSi, SQ-Ai, SQ-B and GS-1) between June 2002 and December 2004,[9] sales having suffered from the lack of consideration to a digital camera back and loss of market share to digital photography and digital single-lens reflex (DSLR) cameras, particularly for the wedding and portrait photography business which had previously been a heavy user of medium-format photographic film but switched quickly to digital photography for its commercial workflow benefits.[7][10] Bronica's last model, the RF645 rangefinder camera, was discontinued in September 2005, and marked the termination of the Bronica camera brand business.[7]

The Japan Camera and Optical Instruments Inspection and Testing Institute (JCII) at its camera museum located in Ichibanchō district, central Tokyo, has a selection of Bronica camera models preserved among its museum display collections; as part of the museum's designation "preserving cameras considered of historical significance".[11]

Bronica SLR system-cameras employed a modular design: The major components of the camera—lens, body, film-back and viewfinder were separate and interchangeable, providing options to match the specific photography or workflow needs of the photographer. 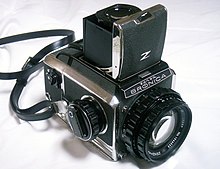 From its start, Bronica introduced a number of 6x6 cm medium-format SLR cameras with focal plane shutter, which used Nikkor lenses from Nikon,[4] until this line was discontinued with the introduction of the successor Bronica SQ-series. These models included:

The range of Nikkor lenses for these remarkable cameras reached from 30mm (fisheye) to 1200mm and comprised about 30 lenses. Lens optics supplied by Carl Zeiss in Jena, Tokyo Optical Co., Ltd., Norita optics, Komura-Komuranon (Sankyo Kohki), Schneider Kreuznach, as well as lens optics later manufactured by Bronica itself based on designs by Zeiss and Japanese lens manufacturers were available, as well as a wide range of accessories, including different film magazines, bellows, and viewfinders. 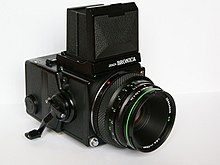 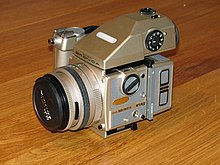 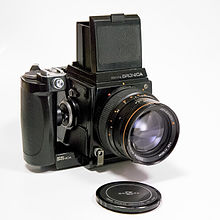