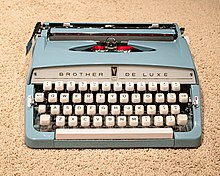 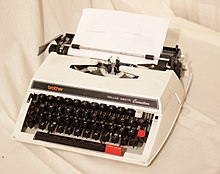 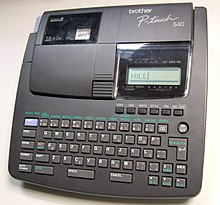 Brother's history began in 1908 when it was originally called Yasui Sewing Machine Co in Nagoya, Japan.[3] In 1955, Brother International Corporation (US) was established as their first overseas sales affiliate. In 1958 a European regional sales company was established in Dublin. The corporate name was changed to Brother Industries, Ltd. in 1962. Brother entered the printer market during its long association with Centronics.[4]

In December 2011, Brother diversified its offerings by acquiring Nefsis, an innovator in web-based remote collaboration and conferencing software.[5]

In November 2012, Brother announced that it had built the last UK-made typewriter at its north Wales factory. It had made 5.9 million typewriters in its Wrexham factory since it opened in 1985. Brother donated the last machine to London's Science Museum.[6]

As of March 2019, Brother's annual revenue was ¥683 billion.[citation needed]

In 2010, the sewing divisions of Brother Industries around Europe were consolidated into one larger company called "Brother Sewing Machines Europe GmbH". With a turnover in excess of €80 million, it is the 4th largest company under the Brother Industries Ltd umbrella of organisations.

In May 2017, Brother Industries manufactured their 60 millionth home sewing machine.

In 1928, the company's first product was a chain stitch sewing machine capable of producing straw hats. The machine was popular for its durability compared to German machines at the time.

They introduced and began mass production of home sewing machines in 1932, when Jitsuichi Yasui, Masayoshi's younger brother and co-founder of their company, succeeded in developing shuttle hooks.

In 1934, they were renamed Nippon Sewing Machine Manufacturing Co. which they subsequently manufacture industrial sewing machines in 1936.

Their 200 HA-1 domestic straight stitching sewing machines were exported to Shanghai, being requested by the Japanese government.

In 1979, they introduced and manufactured their first computerized sewing machined called ZZ3-B820 "Opus 8".[11]

They started making commercial/multi needle sewing machines in 2003 with the introduction of the PR-600. 2010 marked their introduction of a PC design and editing software on their sewing/embroidery machines (Innov-is I) called PE-Design.

In 2013, they introduce a home cutting machine named the CM550DX.

For the Japanese market, Brother introduced a sewing and embroidery combination machine called Parie in 2017.[12]

On August 7, 2018, Brother officially revealed their new 2019 sewing machine product lineup[13]at their Back To Business Dealer Conference held annually in Orlando, Florida to commemorate Brother's 100th anniversary since its inception in 1908. The newest top-of-the-line Brother Sewing/Embroidery/Quilting machine is the Luminaire Innov-ìs XP-1. It features StitchVision technology, which uses light projections to virtually preview a stitch accurately and precisely, as well as a 10.6" by 16" maximum embroidery area.[14]

Brother sponsored Manchester City Football Club from 1987 until 1999, which is one of the longest unbroken sponsorship deals of any English football club.[3]

Brother launched their first integrated, pan European advertising campaign in Autumn 2010 for their A3 printer range. Titled ‘141%’, referring to the ratio between paper sizes A3 and A4.