Citizen Watch Co., Ltd. (シチズン時計株式会社, Shichizun tokei Kabushiki-gaisha) is an electronics company primarily known for its watches, and is the core company of a Japanese global corporate group based in Tokyo. In addition to Citizen brand watches, it is the parent of American watch company Bulova, and is also known for manufacturing small electronics such as calculators.

The company was founded in 1930 by Japanese and Swiss investors. It took over Shokosha Watch Research Institute (founded in 1918) and some facilities of the assembly plant opened in Yokohama in 1912 by the Swiss watchmaker Rodolphe Schmid.

The brand Citizen was first registered in Switzerland by Schmid in 1918 for watches he sold in Japan.[3] The development of this brand was supported in the 1920s by Count Gotō Shinpei with his hope that watches could become affordable to the general public. The growth of Citizen until World War II relied on technology transfer from Switzerland.[4] 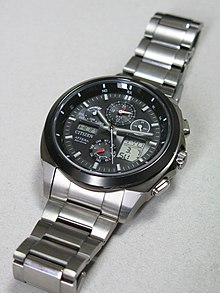 Citizen launched the world's first multi-band atomic timekeeping watch in 1993 and has remained a pioneer of this field. Synchronized to atomic clocks, these watches are accurate to within one second in one hundred thousand years.[5]

The Skyhawk A-T line features radio-controlled timekeeping. The watches can synchronize with radio clocks in Japan, North America, and Europe, automatically selecting the correct frequency by location. The watch actually tracks two time zones—home and world—but synchronizes to the 'home' zone. When traveling, the user may swap the 'home' and 'world' zones, thereby enabling proper time signal reception on a different continent while retaining the other time. The day, date, and daylight saving time settings are set automatically when the watch is synchronized. These features are comparable to the synchronization with atomic clocks found in Casio Wave Ceptor watches.

The Perpetual Chrono A-T synchronizes with the atomic clocks in Colorado or Germany, depending on signal strength and location, and incorporates Eco-Drive technology, so it does not require a battery.[citation needed]

In 2010, Miyota (Citizen Watch) of Japan introduced a newly developed movement (UHF 262 kHz) that uses a three-prong quartz crystal for the Precisionist or Accutron II line, a new type of quartz watch with ultra-high frequency (262.144 kHz) which is claimed to be accurate to +/− 10 seconds a year and has a smooth sweeping second hand rather than one that jumps each second.[6]

Accurate to within five seconds per year, the Chronomaster line is unofficially the most accurate quartz-crystal watch ever made.[7][8] They are currently sold only in the Japanese domestic market but can be obtained internationally if ordered online.[9]

Citizen also produces the Independent Watches line, featuring a more modern, contemporary design than the traditional Citizen label. Depending on the market, these watches may be labelled "Secret", "Lighthouse" brands among others.

The Deployant Clasp with a Push Button (DCP) is a clasp available for many Citizen watch bracelet bands. The clasp, as with the Calibre 8700, is also used with leather bands as if they were metal bracelet-style watchbands; however, when the clasp is fastened, the band appears to be a normal eye-hole and link pin leather watchband. 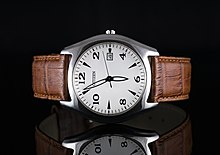 Eco-Drive watches use a battery recharged by a solar panel hidden under the watch face. In the rare and discontinued Eco-Drive Duo series, the solar power was supplemented by an automatic quartz power source. One early model, called the Citizen Vitality, used the watch hands to drive a small electric generator, but was discontinued following complaints that the device could explode and cause wrist injuries. There was also an Eco-Drive Thermo model that exploited temperature differentials between the wearer's skin temperature and ambient temperature to recharge the battery. However, the only Eco-Drive system described on the Citizen Watch official website is the one depending solely on light to recharge. Features similar to the Eco-Drive have been developed by other manufacturers like Casio and Junghans. All Citizen Eco-Drive movements are made in Japan but the case or the bracelet may also be made in China.

Q&Q SmileSolar are a line of solar powered watches, which do not require a battery change. They are made of recycled materials and have a water resistant rating of 10 Bar. The line of watches also supports people by making a donation for each watch purchased.[10]

Citizen also manufactures calculators and small electronic organizers. Some non-watch devices such as handheld televisions and computer printers, have been marketed under the Citizen brand name.

In the 1980s, a number of handheld electronic games were sold under the Q&Q brand.

In the early-mid 1990s, Citizen partnered with Compaq Computer Corporation to build notebook computers in Japan for the Japan and Far Eastern market to be sold under the Compaq name.