A family of transforms composed of sine and sine hyperbolic functions exists. These transforms are made based on the natural vibration of thin square plates with different boundary conditions.[1]

The DST is related to the discrete cosine transform (DCT), which is equivalent to a DFT of real and even functions. See the DCT article for a general discussion of how the boundary conditions relate the various DCT and DST types. Generally, the DST is derived from the DCT by replacing the Neumann condition at x=0 with a Dirichlet condition.[2] Both the DCT and the DST were described by Nasir Ahmed T. Natarajan and K.R. Rao in 1974.[3][4] The type-I DST (DST-I) was later described by Anil K. Jain in 1976, and the type-II DST (DST-II) was then described by H.B. Kekra and J.K. Solanka in 1978.[5]

DSTs are widely employed in solving partial differential equations by spectral methods, where the different variants of the DST correspond to slightly different odd/even boundary conditions at the two ends of the array. 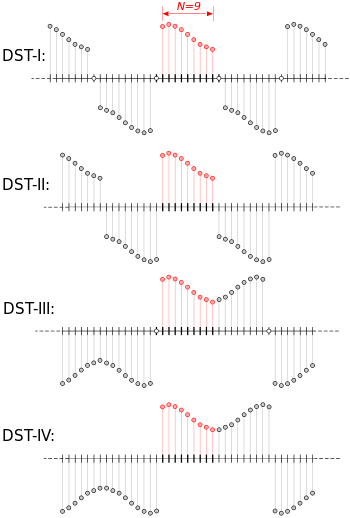 Illustration of the implicit even/odd extensions of DST input data, for N=9 data points (red dots), for the four most common types of DST (types I–IV).

Like any Fourier-related transform, discrete sine transforms (DSTs) express a function or a signal in terms of a sum of sinusoids with different frequencies and amplitudes. Like the discrete Fourier transform (DFT), a DST operates on a function at a finite number of discrete data points. The obvious distinction between a DST and a DFT is that the former uses only sine functions, while the latter uses both cosines and sines (in the form of complex exponentials). However, this visible difference is merely a consequence of a deeper distinction: a DST implies different boundary conditions than the DFT or other related transforms.

The Fourier-related transforms that operate on a function over a finite domain, such as the DFT or DST or a Fourier series, can be thought of as implicitly defining an extension of that function outside the domain. That is, once you write a function

as a sum of sinusoids, you can evaluate that sum at any

These different boundary conditions strongly affect the applications of the transform, and lead to uniquely useful properties for the various DCT types. Most directly, when using Fourier-related transforms to solve partial differential equations by spectral methods, the boundary conditions are directly specified as a part of the problem being solved.

Formally, the discrete sine transform is a linear, invertible function F : RN -> RN (where R denotes the set of real numbers), or equivalently an N × N square matrix. There are several variants of the DST with slightly modified definitions. The N real numbers x0, xN − 1 are transformed into the N real numbers X0, XN − 1 according to one of the formulas:

The DST-I matrix is orthogonal (up to a scale factor).

A DST-I is exactly equivalent to a DFT of a real sequence that is odd around the zero-th and middle points, scaled by 1/2. For example, a DST-I of N=3 real numbers (a,b,c) is exactly equivalent to a DFT of eight real numbers (0,a,b,c,0,−c,−b,−a) (odd symmetry), scaled by 1/2. (In contrast, DST types II–IV involve a half-sample shift in the equivalent DFT.) This is the reason for the N + 1 in the denominator of the sine function: the equivalent DFT has 2(N+1) points and has 2π/2(N+1) in its sinusoid frequency, so the DST-I has π/(N+1) in its frequency.

Thus, the DST-I corresponds to the boundary conditions: xn is odd around n = −1 and odd around n=N; similarly for Xk.

Some authors further multiply the XN − 1 term by 1/√2 (see below for the corresponding change in DST-III). This makes the DST-II matrix orthogonal (up to a scale factor), but breaks the direct correspondence with a real-odd DFT of half-shifted input.

Some authors further multiply the xN − 1 term by √2 (see above for the corresponding change in DST-II). This makes the DST-III matrix orthogonal (up to a scale factor), but breaks the direct correspondence with a real-odd DFT of half-shifted output.

The DST-IV matrix is orthogonal (up to a scale factor).

DST types I–IV are equivalent to real-odd DFTs of even order. In principle, there are actually four additional types of discrete sine transform (Martucci, 1994), corresponding to real-odd DFTs of logically odd order, which have factors of N+1/2 in the denominators of the sine arguments. However, these variants seem to be rarely used in practice.

As for the DFT, the normalization factor in front of these transform definitions is merely a convention and differs between treatments. For example, some authors multiply the transforms by

so that the inverse does not require any additional multiplicative factor.

Although the direct application of these formulas would require O(N2) operations, it is possible to compute the same thing with only O(N log N) complexity by factorizing the computation similar to the fast Fourier transform (FFT). (One can also compute DSTs via FFTs combined with O(N) pre- and post-processing steps.)

A DST-III or DST-IV can be computed from a DCT-III or DCT-IV (see discrete cosine transform), respectively, by reversing the order of the inputs and flipping the sign of every other output, and vice versa for DST-II from DCT-II. In this way it follows that types II–IV of the DST require exactly the same number of arithmetic operations (additions and multiplications) as the corresponding DCT types.