The first DWT was invented by Hungarian mathematician Alfréd Haar. For an input represented by a list of

numbers, the Haar wavelet transform may be considered to pair up input values, storing the difference and passing the sum. This process is repeated recursively, pairing up the sums to prove the next scale, which leads to

differences and a final sum.

The most commonly used set of discrete wavelet transforms was formulated by the Belgian mathematician Ingrid Daubechies in 1988. This formulation is based on the use of recurrence relations to generate progressively finer discrete samplings of an implicit mother wavelet function; each resolution is twice that of the previous scale. In her seminal paper, Daubechies derives a family of wavelets, the first of which is the Haar wavelet. Interest in this field has exploded since then, and many variations of Daubechies' original wavelets were developed.[1][2]

The dual-tree complex wavelet transform (ℂWT) is a relatively recent enhancement to the discrete wavelet transform (DWT), with important additional properties: It is nearly shift invariant and directionally selective in two and higher dimensions. It achieves this with a redundancy factor of only

, substantially lower than the undecimated DWT. The multidimensional (M-D) dual-tree ℂWT is nonseparable but is based on a computationally efficient, separable filter bank (FB).[3]

The Haar DWT illustrates the desirable properties of wavelets in general. First, it can be performed in

operations; second, it captures not only a notion of the frequency content of the input, by examining it at different scales, but also temporal content, i.e. the times at which these frequencies occur. Combined, these two properties make the Fast wavelet transform (FWT) an alternative to the conventional fast Fourier transform (FFT).

Due to the rate-change operators in the filter bank, the discrete WT is not time-invariant but actually very sensitive to the alignment of the signal in time. To address the time-varying problem of wavelet transforms, Mallat and Zhong proposed a new algorithm for wavelet representation of a signal, which is invariant to time shifts.[9] According to this algorithm, which is called a TI-DWT, only the scale parameter is sampled along the dyadic sequence 2^j (j∈Z) and the wavelet transform is calculated for each point in time.[10][11]

The discrete wavelet transform has a huge number of applications in science, engineering, mathematics and computer science. Most notably, it is used for , to represent a discrete signal in a more redundant form, often as a preconditioning for data compression. Practical applications can also be found in signal processing of accelerations for gait analysis,[12][13] image processing,[14][15] in digital communications and many others.[16] [17][18]

It is shown that discrete wavelet transform (discrete in scale and shift, and continuous in time) is successfully implemented as analog filter bank in biomedical signal processing for design of low-power pacemakers and also in ultra-wideband (UWB) wireless communications.[19] 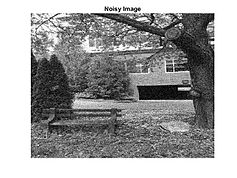 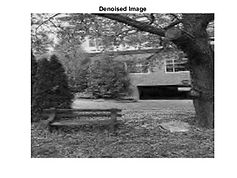 Wavelets are often used to denoise two dimensional signals, such as images. The following example provides three steps to remove unwanted white Gaussian noise from the noisy image shown. Matlab was used to import and filter the image.

The first step is to choose a wavelet type, and a level N of decomposition. In this case biorthogonal 3.5 wavelets were chosen with a level N of 10. Biorthogonal wavelets are commonly used in image processing to detect and filter white Gaussian noise,[20] due to their high contrast of neighboring pixel intensity values. Using these wavelets a wavelet transformation is performed on the two dimensional image.

The final step is to reconstruct the image from the modified levels. This is accomplished using an inverse wavelet transform. The resulting image, with white Gaussian noise removed is shown below the original image. When filtering any form of data it is important to quantify the signal-to-noise-ratio of the result.[citation needed] In this case, the SNR of the noisy image in comparison to the original was 30.4958%, and the SNR of the denoised image is 32.5525%. The resulting improvement of the wavelet filtering is a SNR gain of 2.0567%.[22]

It is important to note that choosing other wavelets, levels, and thresholding strategies can result in different types of filtering. In this example, white Gaussian noise was chosen to be removed. Although, with different thresholding, it could just as easily have been amplified.

To illustrate the differences and similarities between the discrete wavelet transform with the discrete Fourier transform, consider the DWT and DFT of the following sequence: (1,0,0,0), a unit impulse.

while the DWT with Haar wavelets for length 4 data has orthogonal basis in the rows of:

(To simplify notation, whole numbers are used, so the bases are orthogonal but not orthonormal.) 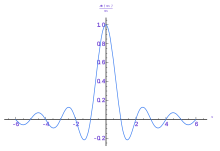 The sinc function, showing the time domain artifacts (undershoot and ringing) of truncating a Fourier series.

The DFT, by contrast, expresses the sequence by the interference of waves of various frequencies – thus truncating the series yields a low-pass filtered version of the series:

Notably, the middle approximation (2-term) differs. From the frequency domain perspective, this is a better approximation, but from the time domain perspective it has drawbacks – it exhibits undershoot – one of the values is negative, though the original series is non-negative everywhere – and ringing, where the right side is non-zero, unlike in the wavelet transform. On the other hand, the Fourier approximation correctly shows a peak, and all points are within

of their correct value, though all points have error. The wavelet approximation, by contrast, places a peak on the left half, but has no peak at the first point, and while it is exactly correct for half the values (reflecting location), it has an error of

for the other values.

This illustrates the kinds of trade-offs between these transforms, and how in some respects the DWT provides preferable behavior, particularly for the modeling of transients.

One level of the transform

The DWT of a signal

is calculated by passing it through a series of filters. First the samples are passed through a low pass filter with impulse response

resulting in a convolution of the two:

The signal is also decomposed simultaneously using a high-pass filter

However, since half the frequencies of the signal have now been removed, half the samples can be discarded according to Nyquist’s rule. The filter output of the low-pass filter

and a high- pass filter

with half the cut-off frequency of the previous one,i.e.:

This decomposition has halved the time resolution since only half of each filter output characterises the signal. However, each output has half the frequency band of the input, so the frequency resolution has been doubled.

With the subsampling operator

the above summation can be written more concisely.

However computing a complete convolution

The Lifting scheme is an optimization where these two computations are interleaved.

This decomposition is repeated to further increase the frequency resolution and the approximation coefficients decomposed with high and low pass filters and then down-sampled. This is represented as a binary tree with nodes representing a sub-space with a different time-frequency localisation. The tree is known as a filter bank.

At each level in the above diagram the signal is decomposed into low and high frequencies. Due to the decomposition process the input signal must be a multiple of

is the number of levels.

For example a signal with 32 samples, frequency range 0 to

and 3 levels of decomposition, 4 output scales are produced:

Frequency domain representation of the DWT

Relationship to the mother wavelet

. In the case of the discrete wavelet transform, the mother wavelet is shifted and scaled by powers of two

is the scale parameter and

is the shift parameter, both which are integers.

Recall that the wavelet coefficient

is the projection of

onto a wavelet, and let

be a signal of length

. In the case of a child wavelet in the discrete family above,

at a particular scale, so that

is a function of

only. In light of the above equation,

can be viewed as a convolution of

with a dilated, reflected, and normalized version of the mother wavelet,

, sampled at the points

. But this is precisely what the detail coefficients give at level

of the discrete wavelet transform. Therefore, for an appropriate choice of

, the detail coefficients of the filter bank correspond exactly to a wavelet coefficient of a discrete set of child wavelets for a given mother wavelet

As an example, consider the discrete Haar wavelet, whose mother wavelet is

. Then the dilated, reflected, and normalized version of this wavelet is

, which is, indeed, the highpass decomposition filter for the discrete Haar wavelet transform.

The filterbank implementation of the Discrete Wavelet Transform takes only O(N) in certain cases, as compared to O(N log N) for the fast Fourier transform.

are both a constant length (i.e. their length is independent of N), then

each take O(N) time. The wavelet filterbank does each of these two O(N) convolutions, then splits the signal into two branches of size N/2. But it only recursively splits the upper branch convolved with

(as contrasted with the FFT, which recursively splits both the upper branch and the lower branch). This leads to the following recurrence relation

which leads to an O(N) time for the entire operation, as can be shown by a geometric series expansion of the above relation.

As an example, the discrete Haar wavelet transform is linear, since in that case

The locality of wavelets, coupled with the O(N) complexity, guarantees that the transform can be computed online (on a streaming basis). This property is in sharp contrast to FFT, which requires access to the entire signal at once. It also applies to the multi-scale transform and also to the multi-dimensional transforms (e.g., 2-D DWT).[23]

In its simplest form, the DWT is remarkably easy to compute.

The Haar wavelet in Java:

Example of above code 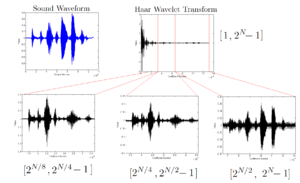 This figure shows an example of applying the above code to compute the Haar wavelet coefficients on a sound waveform. This example highlights two key properties of the wavelet transform: